Brian Goudie, 48, formerly known as Brian Goldie, from Falkirk, is due to face multiple charges relating to the appearance on the internet of videos and stills of his former young Thai assistant providing him with an oral sex service.

David John Hanks, 67, from Girvan, Ayrshire, a former pupil of Girvan Academy, is being sued by Dr. Michael Goulet, of the Thonglor Clinic, in Jomtien, Pattaya, for perjury.

It is alleged that Hanks, who worked out of the offices of Drew Walter Noyes, the former owner of the now defunct Pattaya Times newspaper in the resort, had invented a story about treatment to his face at the clinic, in revenge for his boss being taken to trial for extortion.

Earlier this year Noyes, who falsely claimed to be a lawyer, was convicted and sentenced to two years jail for attempting to extort Goulet’s clinic out of 7 million baht US$129,000. If Goulet did not pay up his premises would be raided by presumably crooked police where illegal substances would be found, and his clinic would receive bad publicity in his newspaper.

During Noyes’s trial Dr. Goulet told the court that just prior to the blackmail attempt Hanks had approached him at the clinic after checking in for treatment.

Hanks had told him that he was in the sex trade in Australia and knew the Chinese mafia.  If he wanted to make a successful business in Pattaya he should see his boss Mr. Noyes.

“David Hanks said things that scared me,” Goulet told the court at Noyes’ trial. “When Noyes called he said: ‘Come to my office and we can talk about the protection we can offer so your business can run smoothly’.”

Goulet after reading about Noyes on www.andrew-drummond.com instead went to the police who set up a sting operation and handed over the first payment of 100,000 baht (about £2,000) to Noyes, Noyes Thai wife, and Hanks in a local restaurant.

Journalist Andrew Drummond * had written a number of exposés of Noyes showing that he was not the lawyer he claimed to be; had cheated people on housing deals and, matrimonial settlements, employed illegal Filipina labour whom he sexually harassed, and had totally invented his biography, in which he described himself as a member of Mensa, and had arrived in Thailand by Royal Proclamation.

He also pointed out the Noyes has been exposed by the media in the United States long before arriving in Thailand. The Star in North Carolina had run a long report about his property and share deals and claims of sexual harassment headed ‘Trouble Follows Developer’.

After Noyes’ arrest Hanks took charges out against Goulet and the clinic claiming irreparable harm had been done to his face. 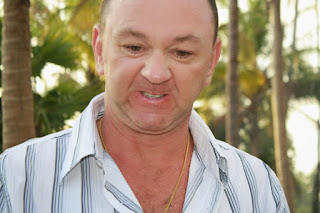 Brian Goudie, was also exposed by Andrew Drummond, as not being the  Scottish Advocate and English barrister which he claimed to be, nor a former officer in the Royal Marines, but who in fact was Brian Goldie, a former Royal Bank of Scotland clerk, who was jailed in Australia for six years for stealing some AUS$400,000 from a Perth mining company.

A warrant had been issued against him for a fraud on the Royal Bank of Scotland but after five years it was withdrawn.

He is currently on bail appealing a three year sentence for cheating a 78-year-old American woman out of US$300,000. 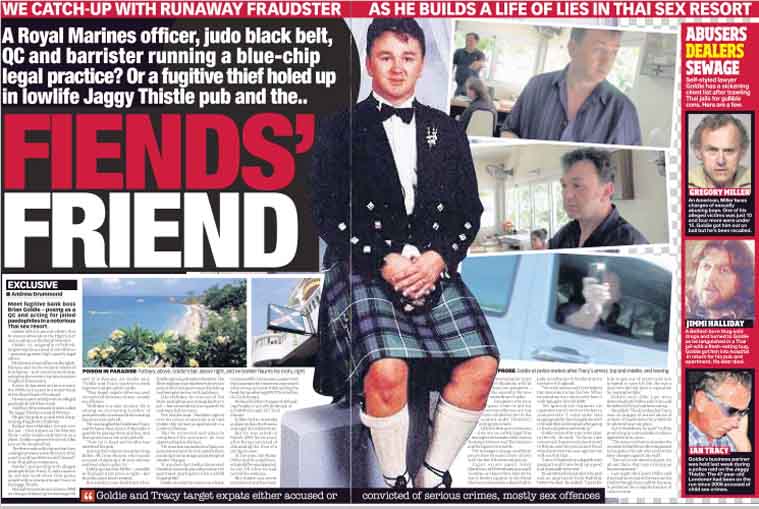 After his exposés on his website and in the UK media – Drummond also named Hanks as the former owner and licencee of Masquerades Brothel in Keysborough, Noyes, Goudie and Hanks, to multiple SLAPP* cases against Drummond using Thailand’s criminal libel and Computer Crime Act libel laws.

They succeeded in gaining one conviction in 12 cases – and that was allowing a poster on his site to describe Noyes and Hanks as ‘pimps’.  Drummond produced documents from ASIC – the Australian Investments and Securities C omission showing that Hanks was the brothel owner and operator, and said that Noyes ran the ‘Zebra’ and ‘Lollipop Bars’ in Pattaya were run by Noyes before he ran a pseudo law firm.  At the bars women could be bought out for sex by paying a fee to the management.

However as prostitution is illegal under Thai law the court would not rule Noyes was running a commercial sex operation even though that is what resort of Pattaya has a world reputation for.

Noyes was forced to withdraw charges of libel against Drummond in relation to his property and matrimonial case frauds and told he could not refile.

He and Goudie have since brought cases against Drummond for using photo-shopped pictures lampooning them.  Noyes is due in court on November 25th to hear his appeal against conviction.

#BrianGoudie and #DavidHanks also took multiple cases with IPSO – the Independent Press Standards Organisation, complaining about stories in the Scotsman and Daily Record.

Said Drummond: “ I am happy with the results of those cases. Goudie and Noyes apparently are not happy with the way things are turning out. They have created some 30 plus Google websites and Facebook pages on the net to hide their own activities and attack their enemies, of which I appear to be the principal.”

“One of their favourite attacks is to claim I am a Nazi, presumably on the basis that is the last thing in the world I want to be called.”

Before he left the UK to work out of Thailand where he has been the registered correspondent for 25 years for the London Evening Standard and The Times, Drummond, formerly of Mearnside, Edinburgh, was the recipient of the Maurice Ludmer Memorial Prize for Investigations into Racism and Fascism.

* SLAPP –  A strategic lawsuit against public participation (SLAPP) is a lawsuit that is intended to censor, intimidate, and silence critics by burdening them with the cost of a legal defense until they abandon their criticism or opposition. (wiki)