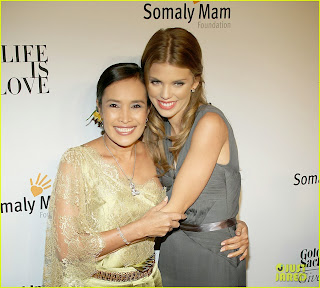 It has been rumbling for a while but a scandal in Cambodia surrounding the false claims of a charity dedicated to helping child sex slaves has erupted in the capital Phnom Penh and like rolling thunder will I assume finally hit Hollywood, and New York’s glitterati.

It seems the charities created by Somaly Mam an attractive Cambodian lady lauded in Time magazine in 2009 as one of the world top 100 most influential women and highly praised by the New York Times, are based on considerable hyping.

Even Hollywood stars such as Angelina Jolie, Susan Sarandan, and Russell Brand have got in on the projects of Somaly Man, recipient of the Prince of Asturias Award for International Co-operation.

Somaly Mam, author of ‘The Road of Lost Innocence’ and President of the Somaly Mam Foundation (Facebook COO Sheryl Sandberg is on the board)  cuts a fine figure in the charity world. Beautiful and gutsy she has become the darling of New York cocktail parties.

But according to yesterday’s Cambodia Daily some of her claims are just not true.

She was propelled onto the world’s stage from obscurity way back in 1988 with the harrowing television interview of a Cambodian child Meas Ratha, who told a gripping but tragic story of abuse as a child prostitute.

Now that young girl is grown up and married and feeling pangs of guilt.

Sixteen years since the documentary was televised, Ms. Ratha—now 32 years old and married—said her testimony for the France 2 channel was fabricated and scripted for her by Ms. Mam as a means of drumming up support for the organization.

“The video that you see, everything that I put in is not my story,” Ms. Ratha told The Cambodia Daily.

Ms. Ratha, who was simultaneously anxious and determined to let people know the truth, said she could no longer continue a lie that had followed her for half her life.

“Somaly said that…if I want to help another woman I have to do [the interview] very well,” Ms. Ratha said.

“You know, my reputation has been lost because of this video,” said Ms. Ratha, who speaks competent English, adding that she had struggled to live with being typecast as a former sex slave since agreeing to tell the fabricated story.(The Cambodia Daily)

“Everybody saw me and say ‘I a prostitute. Her mother sold her.’ They say like this. Everybody looks down on me.”

Meas Ratha is shown on the video doing normal childhood things like playing musical chairs and skipping while being looked after by Somaly Mam’s charity ‘Agir Pour Les Femmes en Situation Precaire’ (Afesip)
These are not the first time such allegations of fabrication have been made up. 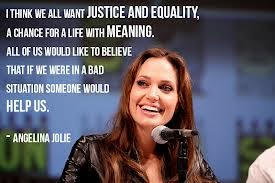 Mom Somaly has also claimed in front of the United Nations General Assembly that eight girls she rescued from the sex industry in Phnom Penh had been killed by the Cambodian Army after they raided her shelter.

She was made to admit that last year that this was not true.

And she has also been accused by her ex -husband Pierre Legros of lying by saying her own daughter was kidnapped in 2006 by human traffickers. Legros accused her of a publicity stunt to raise funds. 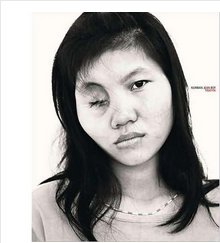 The Cambodia Daily in its own investigation also found a young woman who publicly stated that she had her eye gouged out when she refused to have sex after being trafficked to a brothel.

The woman, Long Pros, had also fabricated her story which she gave on television in prime time interviews.

However, according to the Phnom Penh Daily, medical records and interviews with Ms. Pros’ parents and her eye surgeon showed she had her eye removed in hospital because of a tumour that developed in her childhood.

“Ms. Pros’ parents said she was sent directly from their home to Ms. Mam’s organization in Phnom Penh simply to get an education and she had never spent any time in a brothel,” wrote Cambodian Daily reporters Simon Marks and Phorn Bopha. 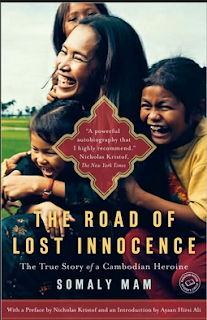 Just how Hollywood, the New York Times and Time magazine are going to react to this story has yet to be seen.

This week The Somaly Mam Foundation announced on The International Day of the Girl, the opening of the Somaly Mam Beauty Salon, a social enterprise developed in partnership with The Estée Lauder Companies.

The full service beauty salon, located in Siem Reap, Cambodia, will cater to tourists and locals alike, while providing survivors of sexual slavery and human trafficking with the education and vocational training needed to achieve socioeconomic independence – RYOT News
——————————————————-
This website has already highlighted the activities, false claims and criticisms of the charities ‘The Grey Man’ and ‘SISHA’ who have been ‘hunting down’ paedophiles in South East Asia.

But its not all bad news. Several girls, who would not have because its not just enough to live in poverty and squalor, have now benefited from an education in Somaly Mam’s home province of Takeo and have now done so without having to go through a brothel ordeal. In fact it was Meas Ratha’s family who caused the storm over the fake interview in the first place. Several girls were ‘screen tested’ by Soumaly Mam in the first place – the best actresses were used, it was claimed by witnesses speaking to The Cambodia Daily.

Footnote: There is no suggestion that either the Somaly Mam Founation or ‘Agir Pour Les Femmes en Situation Precaire’ does not do good work for trafficked children. But people may be concerned about how much is spent on trafficked victims and how much is spent on executives, expenses, etc – see the link below. The Somaly Mam Foundation may have also to correct some expensively produced publicity materials they have put out.

LINK TO THE CAMBODIA DAILY STORY