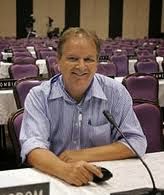 British journalist Andrew Drummond will take on a convicted fraudster, an American exposed in his home country as a man of ‘myriad lies’ together with his common law Thai wife, and a former Melbourne pimp this week in a series of cases foreigners are bringing against him using Thailand’s criminal libel laws and Computer Crime Act. 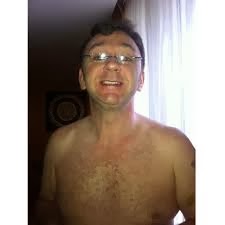 The week of litigation begins today at Koh Samui Court where lawyers for Drummond will seek dismissal of a cash of criminal libel and libel under the Computer Crime Act brought by Scotsman Brian Goudie, who has falsely claimed to be a British Barrister.

It’s odd that Goudie’s lawyers had chosen this day – as Goudie is also due to appear in court in Pattaya today to surrender to bail on a fraud charge brought by British estate agent John Jepson.

Goudie, 47, from Falkirk, was jailed for six years in Australia for stealing from his employers, when he was known as Brian Goldie.

Also on this day at Pattaya Provincial Court Drew Walter Noyes has brought similar charges against the alleged owner of the website SUBZEROSIAM (now closed) claiming photo shopped pictures of him at a Gay Parade are libellous. 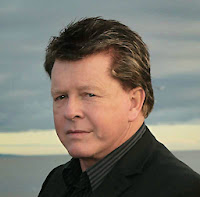 Drew Walter Noyes, 57, is suing Andrew Drummond for remarks made by a poster referring to him in connection with ‘blow jobs’, ‘mia nois’ and the Buffalo Bar. He claims his business has been damaged and people have shunned him at public functions.

Drummond claims his businesses have been damaged because of criminal charges being laid against him and the comments by posters are fair comment and nothing new. 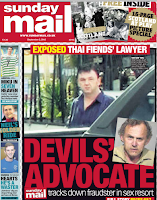 Brian Goudie is again suing Andrew Drummond for repeating allegations made in headlines in the Sunday Mail in Scotland and for suggesting he had been on the run from the Scottish police. It’s similar to the case he has brought in Koh Samui. This case is at Pattaya Provincial Court. An identical case brought at this court has already been dismissed.

Drummond said: “He should sue the Sunday Mail in Scotland, but he will not. Records of the Australian Appeals Tribunal show that under the name Goldie he refused to go back to Scotland to answer an arrest warrant for an alleged fraud on the Royal Bank of Scotland.”

Also on this day Judges will announce their judgement and verdict on a case of criminal libel and libel under the Computer Crime Act brought by Wanrapa Boonsu, described as the common law wife of Drew Noyes.

The result of each hearing will be reported as it is announced. Reports will follow the conclusion of the hearings.The trials continue into the following week

Drew Walter Noyes is suing Andrew Drummond at Pattaya Provincial Court for the same photo-shopped picture of Noyes in a leather pouch for a gay parade. Noyes has presented the birth certificates of eight children he has fathered in Thailand.
———————————————-
Brian Goudie faces charges of defrauding an American woman, aged 75, called Barbara Fanelli Miller out of US$300,000, the fee he charged as a barrister for getting her son out of jail on child sexual abuse charges.

He also faces a fraud charge brought by John Jepson which relate to his false claims to have a law degree.

Drew Noyes and Wanrapa Boonsu have been charged with conspiracy to defraud the Thonglor Clinic, Jomtien by demanding money with menaces – the menaces being a raid by the CSD and bad publicity in his newspaper.

Both are also in the civil court in a case brought by Dutchman Theo van der schaaf who claims they pocketed the 2.5 million baht he gave them as a settlement with his Thai girlfriend.

The First And Most Prestigious FLYING SPORRAN GOLDEN GLOBE AWARDS

January 9, 2012 Andrew Comments Off on The First And Most Prestigious FLYING SPORRAN GOLDEN GLOBE AWARDS