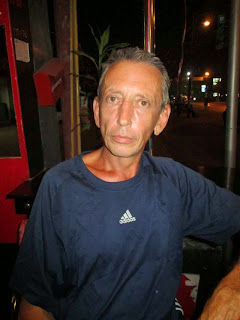 A Briton working as a prison visitor for the ‘Mercy Centre’ in Pattaya has been released from jail in Thailand and acquitted of child
sexual abuse cases in a staggering case which goes beyond simple mistaken identity.

Ian Charles Tracey,47, said he was charged in the place of
his namesake another Briton called Andrew John Tracy, who has since disappeared
from the court system in Thailand and now appears to be in Cambodia.
Amazingly Ian Tracey was jailed in his absence, and was living in
a room provided by fake British lawyer Brian Goudie, who, it is believed, reported his presence to the Women and Children’s Department of the Thai Police
in Banglamuang, near Pattaya.

In fact Tracey has been acquitted at his original trial when a boy he was accused of abusing stood up and said ‘He is not John’  and that he was under pressure from police to say to come to the court. He never had any sexual relations with Ian Tracy.

The prosecution had claimed they could not find the boy witness. He was produced by the defence after they did not do so. According to documents, admitted by the prosecution, the boy was threatened with ten years on drugs charges if he did not identify Tracey in a recorded video.

Tracey said had been arrested under the wrong name and claimed to police that not only was the name wrong but also the address.

Goudie, said Tracey, had promised that he would
sort out the mix up and sue the police for 20 million baht. But Goudie did not such thing.

Instead he called up the police and told them to pick Tracey up at his apartment above the ‘Jaggy Thistle’ pub. He visited his client the following week in jail and that’s the last Tracey saw of him.

Goudie began a four year sentence after the prosecutor appeal the decision and won in a case neither he nor his original Thai lawyer were informed about. The appeal result was read out in his absence.

“The most appalling part was when police came to my house. The arrest and search warrant was not in my name nor was it my address. They could not find the Tracy on the arrest warrant so they came back and arrested me and searched my house anyway. I told them I was totally innocence and they would have to make it up…and they did.”

He was released on December 27 2013 after serving 15 months of the sentence.
He had known Goudie from the case of Jimmy ‘Doc’ Halliday, a
notorious Ulster drugs trafficker, who died of necrotising fasciitis in the
Bangkok Pattaya Hospital 19 months ago.
Goudie, who was jailed in Australia for six years for theft of AUS$400,000 from his employers under the name Brian
Goldie, inherited Halliday’s estate by getting him to sign a power of attorney
on his death bed, and took over the ownership of the Jaggy Thistle pub in
Jomtien, under his name and that of his dormant companies Ramadin  and Bang Kao Bay Holding Company. 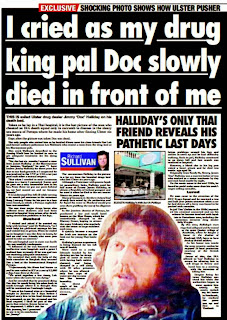 In the judgment by the Supreme Court the judges refer to errors
in the names and the address of the defendant.
Tracey believes he was set up because he knew that Goudie was
going to cheat a 75-year-old American mother out of a lot of money for defending
her son Gregory Miller on child sexual abuse charges.

“I told her to pay nothing without a full explanation. I
told her if she was going to pay money to the courts for bail she should do it
herself or she would never get it back.”

Goudie is currently under examination by the Pattaya Courts
where Mrs. Barbara Fanelli Miller, now 76, has brought a case against him for
cheating her out of US$300,000 on the promise on the release of her son. He has to surrender to bail on January 27th.
Miller was later sentenced to 39 years in jail a matter
which Goudie has been gloating about on his ‘legal website’ Case-Watch-Thailand.Blogspot.com.
Tracey said: “Goudie told me that it was going to cost the
mother a lot of money to defend her son and offered me 2 million baht. I
declined it”.
Speaking in Pattaya after being released last Friday he
added: “At the moment my life is ruined. I have had a career in advertising and
marketing. There is no way I can return to this business until I am completely
cleared and all references to this alleged offence removed.

“Goudie had me completely fooled. I thought he was a genuine lawyer. I saw him put down a million baht on Miller’s hospital bill.

“He said: ‘I am going to do everything to save this guy’s life’. So I thought he was the real deal.

“I never even knew that I had been convicted on appeal. It was Goudie who told me. I had asked him to sue the police on my behalf. He said I need not worry. He was personal friends with the Justice Minister.

“He discovered the judgment when he went to the court to check. he suggested I move to the ‘Jaggie Thistle’ for my own safety or just as a precaution. Only he, Mrs Miller and my girlfriend knew where I was staying.”

Mr. Tracey is now considering his legal options. First of all he wants to know why Goudie, who was allegedly representing him, never put in any papers into court as promised. His lawyers have accepted his case for damages for wrongful arrest on a 30 per cent basis. He plans to sue police and take the matter to the National Anti Corruption Commission.
Goudie of course has never been a lawyer or an officer in the Royal Marines as he has claimed. He is a 100 per cent phoney, who with a knowledge of Thai, has managed to convince local courts that he is actually a somebody.
Goudie’s former girlfriend and assistant B K confirmed that Goudie had called police in Banglamuang to report Ian Tracy’s
presence at the Jaggy Thistle. She added that this occurred after Mrs. Barbara
Fanelli Miller had left the premises to return to the United States.

Goudie has to surrender to bail on  January 27th on a charge of cheating a 75-year-old American woman Barbara Fannelli Miller out of US$300,000 – a charge he made to get her son Gregory Miller, an international school teacher, out of the Nong Plalai jail where he was being held on child abuse charges.

Since she had turned against Goudie (above right) she has been the subject
of a vicious campaign on the internet
where personal and intimate pictures have been posted of her on a blogspot site and a Google+ site. Nattsuda Sripawat another former girlfriend has also had a website set up in her name praising ‘my good man Brian Goudie’. In actual fact her pictures now appear on 13 separate internet social websites and her picture is being used to front the sale of Bang Kao Bay Residences.

Comment: The trial and conviction on appeal raises serious disquieting concerns about Thailand’s policing of alleged foreign child sexual abusers in Thailand. It appears ‘victims’ are giving evidence by rote, and many child victims and returning time and time again to the courts to give evidence against new offenders, when it is clear that these children should be in care.

Many foreign police forces have provided training courses for Royal Thai Police in the interdiction of paedophiles and child sexual abusers but this, according to Tracy’s evidence from his prison visiting, does not appeared to have, stopped the culture of payment.

There will be those who forcefully argue that these people deserve anything they get. They are however entitled to justice just as any other offender.

As for the activities of Brian Goudie, formerly Prisoner E0000274 Brian James Goldie as guest of the West Australia Department of Corrective Services, words fail me.

As part of Operation Naga a number of foreigners were arrested in December 2008 on child sexual abuse charges in the Pattaya area. This was about the time when Andrew John Tracy was very active. A Thai Police witnesses told the court that Thai police had been given Tracy’s name by British Police. British police still want to know where Andrew John Tracy from Wickford, Essex, is.