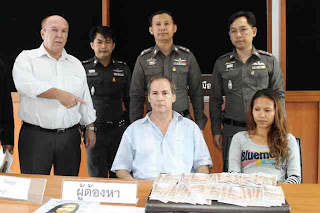 They have taken it badly. American Drew Noyes and his common law wife Wanrapa Boonsu, angered that they have been caught with their fingers in the till and are now on trial charged with extortion, are doing their best to drive the clinic, which they allegedly tried to extort, out of business.

In their usual vengeful style they have now completely invented a police raid on the premises of the Thonglor Clinic in Bangkok which they said took place on August 23rd – three days ago.

In the current online issue of the Pattaya Times, part of the illegal and unregistered Pattaya Media Corporation they claim that police caught a doctor injecting a patient with a fake drugs.

This raid of course never happened. But the Thonglor Clinic was raided by police in 2011.

Its been totally invented by the Pattaya Times Media Corporation. 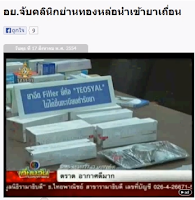 country I know of and conforms with the U.S. Food and Drugs Administration laws.

It appears that this is where Noyes got the idea to raid the Thonglor Clinic in Jomtien.

Pattaya Provincial Court has been told that there was actually a raid on the Jomtien clinic last year after Dr. Michael Goulet came up with only 100,000 out of 2.3 million baht  demanded by Drew Noyes to stop it also promising bad publicity in the Pattaya Times, but nothing illegal was found.

The Pattaya Times report, which can be found here and on a website run by Scottish con man and phoney barrister Brian Goudie, 47, both of whom have teamed together in adversity, comes after another report claiming the journalist credentials of Andrew Drummond had been removed by the Thai Government Public Relations Department.  That report was also false.*

Drew Noyes, who claims to be an advisor to the Mayor of Pattaya Ittiphol Khonplume and ‘many government officials’, has been at pains to remove his name as a director of the dubious companies he has been running and replacing them with the names of an Indian and a couple of Americans and a young New Zealander.

PAPPA Co. Ltd., for instance has not paid any tax for four years- least of all on the 2.5  million baht he allegedly misappropriated from Dutchman Theo van der schaff.

He has palmed off the Pattaya Times on a Thai Indian and seems to have gained membership of the Board of the Lions Club in Bangkok for his generosity!

And like Brian Goudie has been trying to sell up properties, which he has acquired in a variety of different names, including that of Wanrapa.

Meanwhile David Hanks, the former owner of Masquerades Brothel in Victoria, Australia, which specialised in ‘Asian hotties’ is seeking damages from the Thonglor Clinic after signing up for a course at the clinic, coincidentally 2 weeks before it was raided.

Known as ‘Babyface’ at the clinic 62-year-old Hanks claims he has lost his good looks the work was carried out by a vet and that he was lucky not to have been neutered. This is a case which we will have to cover, if it gets to court.

(Comment:Noyes the father of nine children in Thailand, who has been required by Chonburi court to pay child support, would perhaps have benefited from such a service.)

Hanks who shares a ‘service’ company with Wanrapa Boonsu, which does not appear to service anyone, has been acting as a henchman to Drew Noyes, 57.

Dr. Michel Goulet, director of the Jomtien Clinic told the court how Hanks approached him two weeks before the raid after signing up for treatment at the clinic and said he was in the sex trade in Melbourne and had Chinese mafia amongst his friends. His mafia boss ‘Drew Noyes’ wished to see him to show him how he could safely run a clinic in Jomtien.

That later entailed a payment of 2.3 million baht to Drew Noyes, Pattaya Provincial Court has been told. Dr. Goulet went to police who recorded Wanrapa Boonsu telling Goulet to hurry up with the cash before they set up a sting at the News Restaurant in Pattaya. Noyes was arrested as he walked off with 100,000 Thai baht.

*The Thai Government Public Relations Department has assured Andrew Drummond that his press credentials have not been withdrawn. They are further examining a video and 100 page file in relation to Drew Noyes, the Pattaya Times, Wanrapa Boonsu and David Hanks. Andrew Drummond who has been accredited to the PRD and Ministry of Foreign Affairs for over 20 years submitting work which had satisfied the criteria for his accreditation to the London Evening Standard and The Times, had sought re-assurance from the PRD that accredited Foreign Correspondents can rely on it for support. The Pattaya Times has now deleted a link to a ‘letter’ from the PRD to Wanrapa Boonsu. 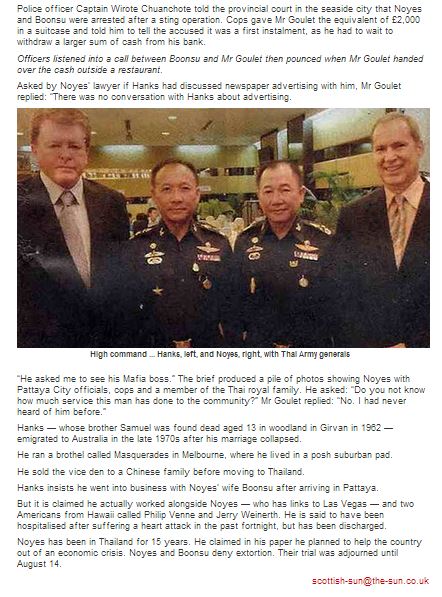 Above how the Sun reported the Noyes case and David Hanks’ involvement. The ‘crimelord’ tag for Drew Noyes was their interpretation and rather flattering of Noyes’ abilities. I do not think Hanks is known as ‘Baby Face’ in gangland circles – but more to the giggling nurses at the Thonglor clinic

NO COURT WRITS PLEASE – IT UPSETS THE NON GUESTS

July 2, 2015 Andrew Comments Off on NO COURT WRITS PLEASE – IT UPSETS THE NON GUESTS

Why Did Your Police Kill My Granny Mr. Thaksin?

October 14, 2007 Andrew Comments Off on Why Did Your Police Kill My Granny Mr. Thaksin?