* Touch of a paedophile – The SUN 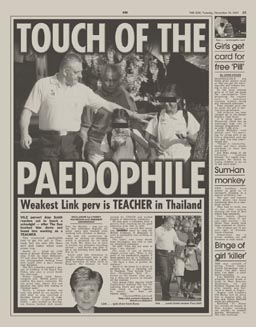 This man claims to have worked for UNICEF – the United Nation’s Children Fund – and here he is mingling with children on the way home from school in Bangkok.

But today he is exposed as a paedophile who won on the BBC quiz show ‘The Weakest Link’ hosted by Anne Robinson, and who bragged about using his winnings to visit Thailand.

Alan Thomas Smith is a registered sex-offender. He has been banned from seeking employment close to children in Britain, but using forged documents, he is now happily mixing with 5-15 year olds as a teacher in the Far East.

Smith notified the British authorities that he planned to go to Thailand last November, as he was required to do by law.

But when a ‘concerned British citizen’ later notified the British Embassy in Bangkok that he knew of a sex offender who had got a job teaching in Thailand the informant was quickly dismissed by a British Embassy official.

Smith, 54, from Accrington, Lancashire, is teaching English at the Nongyai temple school set in the grounds of a Buddhist monastery 20 miles north of the Thai capital.

Nobody questioned his fake references. In his application for the job he claimed to have worked for UNICEF for five months. He also said he was a graduate in English of the University of Manchester.

In fact Smith, a former Butlin’s Redcoat, is better known in Lancashire as ‘Stan the Monkey’ – the mascot of Accrington Stanley, one of Britain’s oldest football clubs;  though he was replaced by ‘Fraser the Eagle’ when his sordid private life came out in open court.

He also a produced a reference for a security company, which vouched for his good behaviour from 2001 and 2006.

In fact for  nearly half of 2005 Smith was in jail awaiting trial for offences against young children.  In August 2005 a judge at Burnley Crown Court branded Smith a ‘sex pest’ and jailed him for six months for indecency with a 14-yr-old girl.

Judge Anthony Russell QC said: ‘You assaulted the girl’s privacy and dignity. It was clear that she did not want the attentions of a man who was old enough to be her father.’  He ordered Smith to be put on the sex-offenders register for seven years.

Smith was the strongest link in the Anne Robinson BBC TV show ‘The Weakest Link’ in January 2005, taking home £3,580. At the time he told a local newspaper he planned to buy a BMW or take a holiday in Thailand.

‘Anne Robinson was really nice and she kept calling me Accrington Alan.’

He had no use for a BMW. Three weeks later he was arrested on child sex charges. In November 2006 he set off for Bangkok after notifying the British authorities.

The exposure of Alan Smith comes after a series of cases of foreign paedophiles who have successfully got jobs teaching children in Thailand including Canadian Christopher Neil, 32, better known as ‘Mr. Swirly’ after German police cleaned up the ‘swirly’ picture of him abusing a young boy which he put on the internet.

British consular officials ignored information on his activities in Bangkok, despite the fact that British tax-payers have spent hundreds of thousands of pounds on Embassy run courses in Bangkok to educate Thai police and welfare officials in  how to catch paedophiles both on the internet and in society in general.
Emails show how a British consular official fobbed of an expatriate Briton who complained a he knew of a convicted sex offender working in a Thai school. 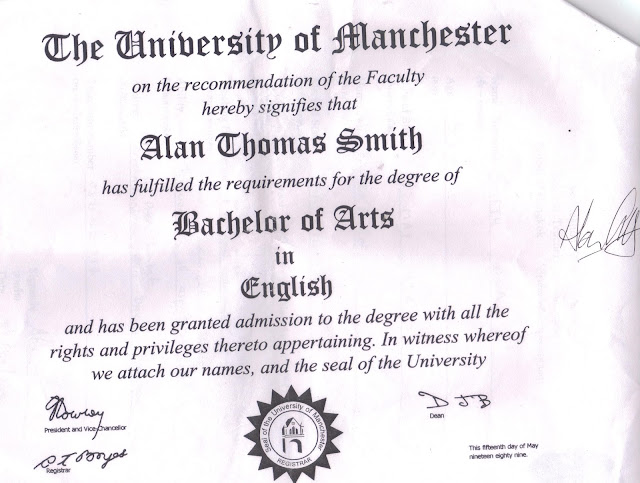 The Embassy official did not ask for details from the cautious Briton, (who was too frightened of being identified) to back up his allegations, and suggested he take his complaint elsewhere, warning him ‘as you point out there are risks involved when reporting something like this.’

All the consular official needed to do was ask for Smith’s name and home town. Then a simple ‘Google’ search on the internet would have revealed everything the proper authorities needed to know.

The informant said: ‘I offered to give them the information but was scared to be identified. But they did not want to know anyway.’

Meanwhile the mother of a 14-yr-old boy in one of the indecency cases not proceeded with by police said: ‘It beggars belief that this man should be allowed to travel to Thailand where he can commit further offences.

‘What is the point of the paedophile register if these people can go to Thailand which we hear is a favourite country for paedophiles. We have a duty to protect all children.’

Police Colonel Jarut Surattuyaporn of the ‘Crimes against Women and Children’  Bangkok Metropolitan Police said: ”If British police can confirm this man’s conviction we can arrest him, deport him and blacklist from coming to Thailand again.’

A spokesman for CEOP said: ‘Officers are already co-operating with the Royal Thai Police in regard to this case.’

Sudarat Sereewat, of the Thai organisation FACE (Fight Against Child Exploitation) said: ‘This is a disturbing case. Everybody needs to work together to ensure this does not happen again.’

There are no laws to prevent British registered sex offenders to travel abroad and they often do, to avoid hassle at home.

PAGE ONE COMMENT – WE ARE BACK IN BUSINESS! – THE TRUTH WILL OUT!