INVESTIGATED BY THE NEWS OF THE WORLD – MUGGED BY LADYBOYS – PLAYED BRIDGE WITH MOBSTERS – BRITAIN’S FORMER HONORARY CONSUL IN PATTAYA REVEALS ALL IN A DAYS WORK!

Britain’s Honorary Consul in the Thai resort of Pattaya was
forbidden to work more than ten hours a month, told to switch off his mobile
phone at 4 pm and stop ‘over-servicing’ British citizens.
Barry Kenyon, 72, was also told by an Embassy official to give British
investigative journalist Andrew Drummond ‘a wide berth – because he is not on
our side’ and made to operate out of an office with no toilet facilities, but
with the required bullet proof glass booth.
In an e-book published this month ‘Honorary Consul Pattaya’  Kenyon, a Liverpudlian, paints a tragic, but
sometimes hilarious account of his work in Pattaya –  from where a third of all
Britain’s Consular issues and problems in Thailand come… all on a stipend of just £2000 a year.
For most of the time he ignored the directives from Bangkok
to ‘go slow’ and dealt perhaps more than anyone else with the problems of ‘Brits
in the sh*t’ in Thailand (as he refers to them, an expression I think he might
have heard journalists use) all on a stipend of 2000 baht a month.

The bridge playing Hon Con  took the job, retiring in 2010, and recalls
how he got mugged by lady boys, while on His Majesty’s Service, and was hounded by
News of the World reporters following a false lead.
A typical Pattaya Bridge Club?
He also played bridge with a few men wanted by police and Michael Stacpoole  who was wanted to testify against the former Chairman of Britain’s Conservative Party. Stacpoole was the aide to the disgraced British Conservative politician Jeffrey
Archer, who perjured himself over his dealing with a prostitute. While the
British press were on a wild hunt for him he was quaffing whisky and playing a bad hand at Chez Kenyon.
Stacpole was a twitness to the truth, an ex public schoolboy, former PR for Walls Ice Cream who liked wine and women in that order.

(Actually although I missed his bridge games I had already found him at the Winchester Pub, now possibly the Blind Beggar in Jomtien, and negotiated the sale of his story to the Mail on Sunday for £50,000).
Smoking Gun?
Barry also recalls how a Thai consular assistant was discreetly
dismissed after a loaded and unregistered gun was found in her car. Had she had
enough of whining Brits?
Barry’s comments about my relationship with the Embassy’s
Consular Section is spot on. I maintained a very good relationships privately
with the right people in the Embassy for years – so much so that the Drugs
Liaison officer sold me his company Rover car at a knockdown price.
But others in the Embassy whined and insisted that an
Embassy official witness as the tiny little flagpole at the front was removed.
(Obviously this car was not much good for surveillance and what Britain’s civil
service dictates goes, so he actually used a Japanese model with false plates)
Things are a bit different now. I’m more ‘Life on Mars’ at
least two of the former DCI’s I know back in the UK are now Chief Constables.
They will talk to me but getting ordinary police, below Chief Super,  to talk nowadays other than through a
Press office is a bit like calling the Embassy on Friday afternoon and
expecting an answer. As for the press office – its best to talk to people in London who are not so paranoic.
Elsewhere Barry is more than complimentary. He describes me
as one of , if not the, best investigative journalists in South East Asia, but I think he meant the oldest.

Of the caution to give me a wide berth he says:

“But that
caution misunderstands what the journalist is doing. Andrew exposes what he knows to be wrong. On his website he
will attack embassy personnel, business personalities and fraud’s and fakers of
any kind if the story needs telling and he has the documentary evidence to
back up his claims…..and he has never yet lost a legal case (as far as I know).”

I do not think Barry included those compliments to get a good book review. But its helped.
I have to say I was circumspect when I first met Barry, which was on a case he details in the book, where a little girl
called Leena and her mum were left destitute when her father a minor British  actor, died in a hotel while on a ‘trip to
Bangkok”.
Was the British Government going to pay the man’s pension to
his Thai wife and cute daughter? This was one of Barry’s first jobs and Barry
turned up in shorts and a colourful shirt to deal with the issue. (For what happened you will have to read the book then warn your Thai wives.)
I thought to myself. ‘This is going to make great television’.
Barry in turn was criticized by the Embassy for stepping into the limelight. ‘Its not cricket’ he says he was told, as he continued to strive to adjust the image of Embassy officials as chinless gin drinking wonders down to gay street cred.. 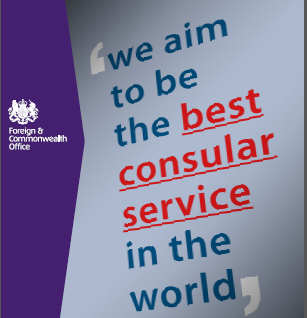 As time passed I came to realise and actually be quite astounded by
the amazing behind the scenes private efforts he was making for Britons in Pattaya –
well above the guidelines he was given by the Embassy- prior to his retirement. But, of course, he has had to face a butt of criticism too I suspect. It goes with the job.
He did not like the new regime in Bangkok nor the attitude –
‘just give everybody the British Embassy number’ when the number was often not
answered.
Now the system is even worse. Britain’s Foreign Minister  is now promoting the new ‘social media’ British missions. The Embassy in on the
net in all its glory – but Facebook or Twitter won’t help the Brit who is mugged and lost
everything including his passport, or bereaved relatives. But that’s progress.
I went to look for Barry’s image in my photo files but apart
from one or two mugshots (not the one above) all I could find was surveillance photos of his home and car
from an investigation I was able to knock very quickly years ago.
When Barry had been hounded by the News of the World’s  ‘Sheik’ Mahzer Mahmood and Roger Insall, who was trying to suggest he liked young boys, I was able to assist in killing the wildly spurious and untrue allegations (A previous consul was – and was headlined Britain’s Vice Consul) I knew the truth. I had investigated briefly before at the request of another newspaper. It did not require me to attempt a showdown with Barry as the evidence was to the contrary.

Barry is not scathing of the British Embassy or FCO. Staff are misunderstood. The fact is they have little powers to do anything, a lot is being referred back to London. There’s a regulation to cover anything. They operate on a ‘tic the box’ method so there’s no scope to create stars, except in home economy.

Any thought that you can get a visa for a Thai girlfriend by clearing with a friend at the Embassy (as I have done in the past. I even let the Deputy Head of Mission dance with mine… dance only mind) you can just forget.  –  but he does concede that what help you get does still tend to rest on who you are.

You can download Barry’s book to almost anything and that includes your computer, phone, kindle etc from  this link.  Or click on the Honorary Consul Pattaya box in the right hand column of the main page. It is essential reading for an era where Brits dominated the disaster headlines in Pattaya before conceding their leading role to the Russias…so it has to include some sex drugs and rock n’roll. And he knows a few crooks!

A SLAP ON THE BACK FOR A HACK

September 1, 2013 Andrew Comments Off on A SLAP ON THE BACK FOR A HACK