Controversial American Drew Noyes, the former ‘fake lawyer’ and publisher of the now defunct Pattaya Times newspaper has now surfaced in Bangkok as the ‘Lion King’
. 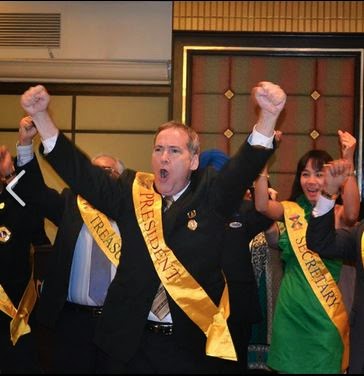 Noyes, who was exposed in connection with alleged property fraud, share fraud, and sexual harassment, by the Morning Star in Wilmington, North Carolina, before his triumphal but delusional arrival in Thailand by either ‘royal proclamation’ or at the invitation of the Bank of Thailand to get the country out of the economic crisis of the late 90’s, has been elected President of the Lions Club Silom 310D Branch, which is predominantly Indian.

As forecast here the formal induction happened on July 2nd.

Having failed to make friends with the Russians in Pattaya despite many sorties to the ‘Moulin Rouge’ club there he has been courting Bangkok’s Indian community, as he rises like a Phoenix in some place other than Pattaya, where his fame is something of a hindrance.

In fact he has quietly taken his name of One Stop Service Center in Pattaya replacing his name with some maybe Iranian chap called (phonetically) Cyrus Casrat Faslihi who could end up taking a fall for work done in the name of this company. I am guessing this must come from my frequent mutterings of ‘Am I surprised? No!’ at the mere mention of the story of how Noyes attempted to obtain 7 million baht, reduced to 2.3 million, to stop a police raid on the premises of the Thonglor Clinic, where presumably something illegal would be found. 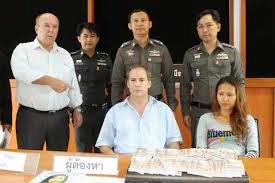 Anyway it seems like the Lions Club was impressed with their new President – and I am not going to ring them up and say ‘Shome mishtake shurely!’

A source within the Lions said today (Wednesday): ‘Drew Noyes told us he had been cleared of all charges and that he was a victim of a rogue journalist.”

On his Facebook page he claimed to be the first Anglo-Saxon President of the International Lions Club of Thailand.

“Now that I am the the first Anglo-Saxon President of the Lions Club in Thailand – I will lobby for more rights for all foreigners.”

The Lions and Leo Clubs are of course not lobbying clubs. They are clubs set up to do charitable work.

If he is lobbying for foreigners rights in Thailand it maybe that some people think that the best thing he could do would be to head out to the airport and catch a plane…(but he can’t, not without the permission of the court).

Then no more foreigners will be sold housing designed for Thais at inflated prices, or put their properties in his wife’s name, or have their divorces screwed up on his expensive legal advice.

If Drew were to go there are people waiting for him in the United States – not least Tom Flanagan, from San Jose, California, who has a US$72,000 judgment against him for selling bogus shares through his equally bogus New England Trading Company.

As for the Anglo Saxon bit I am not sure this is strictly true. He claims one of his ancestors won the ‘Battle of Hastings’ – and he was a Norman fighting the Anglo-Saxons, but what the hell…if he wants to be British well at least the NHS Mental Health Care is running better, if barely, than Obamacare.

The Lions Club of Silom 310D who have clearly swallowed his life story ‘hook line and sinker’ were made to watch a slide show of his achievements – his alleged  ‘palace approval’, awards,  and people of significance he had met. This is a change from pro Shinawatra and red-shirt days. But I am not sure everyone was riveted.

It appears he is even studying Indian politics. He turned up uninvited to a meeting of the (OFBJP) Overseas Friends of the Bharatiya Janata Party,  India’s leading political, party trying to get members.

Somebody apparently wrote in to warn them – and got the reply

We met and seen him first time in our life and we don’t have any association with him  and neither he was a part of the meeting. India is our motherland and OFBJP is our family and we will never let its reputation (be) jeopardise(d).  Thanks for informing us and being our well-wisher.”

Noyes has created a website bangkoklionsclub.com . If you click on created ‘powered by Love of Bangkok Thailand’ it takes you to ‘One Stop Legal Services’ where you can see pictures of his staff  including David Hanks, currently on bail for racketeering/ Its alleged that he loaned cash to Russians at 60 per cent pcm – and those who did not cough up were beaten up.

Under ‘about us’ he shows a picture of an investigator long since gone (A Brit who helped edit his Pattaya Times) and boasts it has adjunct offices in Phuket, Udon, Chiang Mai and Bangkok.

“Most of the work on the national and international level is completed in Bangkok and the majority of staff works from the Pattaya headquarters,” he says explaining why is no longer in Pattaya much.

‘One Stop Legal Service bi-lingual staff has significant, friendly contacts everywhere in Thailand with Thai police, jails, court staff and all Thailand government offices,’ he adds indicating he quite clear has police, jails and court on his mind.

‘In the Legal Division Drew offers the services of seven registered Thai attorneys-at-law on staff for litigation, divorce, contracts and all legal services of non-Thais (Expats and visitors) requiring an attorney-at-law’ – an overstatement by six.
“Drew Noyes was the Founding Chairman of both of the Pattaya Expats Clubs, the Founding President of the Optimist Club of Thailand and is the President of the Lions Club International Bangkok-Silom.”  –

Two down and one to go! Could he be looking for someone in Bangkok to give him a character reference?

FOOTNOTE: All I can say to the Lions Club Bangkok Silom 310D committee is that of course Noyes has not been cleared of any charges brought against him by the police or counter charges brought by myself against him. This man is no shrinking violent. He, as part of the gang of three, the other two are David Hanks, (see above), and Brian Goudie, on bail for fraud, have brought fourteen cases against me and lost 13. The 14th is on appeal is for an alleged libel, not by myself, but a poster on my site.

THAILAND’S OTHER MEN IN BLACK

February 17, 2015 Andrew Comments Off on THAILAND’S OTHER MEN IN BLACK