The public prosecutor in Koh Samui – the same man prosecuting the two Burmese for the murders of Hannah Witheridge – is a man of two minds – according to an answer he has supplied to the Thai National Human Rights Commission.

In the case of Jack Hansen-Bartel, who was brutally attacked in the Green Mango Club in Koh Samui last June, prosecutor Paiboon Achawananthakhun has also decided to prosecute Hansen-Bartel in the face of video footage which to all intents and purposes proves his innocence.

But the charge Jack faces is the assault of Raymond Chang and Ryan, without causing any serious harm at all either to the body or mentally and causing a disturbance in a public place.

And why bother with this charge let alone fly police to Bangkok to interview him.  It’s not surprising the NHRC want to know. Here below is the prosecutor’s answer.

“As you filed to the Director General  in order to get a fair trial for the prosecution in Samui on Jack Hansen-Bartel, the son, after Raymond Tony Chang and his associate assaulted and caused severe injuries but was accused and filed by investigating officer that Jack assaulted Raymond Tony Chang and associate, the public prosecutor’s office of Koh Samui would like to inform the following case involved everyone using force to each other and both sides has filed complaints to each other and the investigator of Bo Phut has both of the files and has and separated into two file briefings.

“The first briefing is from the son of the person who made this complaint, who is the victim.

Later on the prosecutor has filed against Ryan Wang and R T Chang, the 1st and 2nd defendants.  The charges are assaulting until someone is severely injured and mentally harming them and being vociferous in a public place and disturbing the peace.

Criminal case number  91/372/297 and criminal case 1546/2557 of Samui court. Details attached with the information that has been sent  pending appointment for the 6th of Jan at 9 am.

The other part of the case where Jack Hansen-Bartel  who fell into being a suspect from getting accused of the assault of Ryan Chang and Raymond Wand, without causing any serious harm at all either to the body or mentally and  causing a disturbance in a public place.

The investigator ( Danchai) sent the case to the Public Prosecutor in Samui on the 26th of August , but did not send in the suspect when they sent in the case and didn’t state that the suspect had escaped.

So the public prosecutor’s office sent the file back to the police investigator in order to process it the right way, following the rule of the law. After that, the police inquiry official sent back the case again to the Public Prosecutor and has now agreed to file a charge against Jack Hansen-Bartel. The case is assault without seriously harming or mentally injuring anyone and disturbing the peace.  Criminal case number as above.

To file the case following the law where you ask for fairness, the public prosecutor of Samui has taken into consideration.

From the hearing of the “middle person” who does not profit from any side we have come to the conclusion that there was using of force in this case equally and towards each other.
The prosecutor has an opinion and orders to file against JACK Hansen Bartel, the suspect. The case is assaulting other people but not causing severe harm to the body or mentally and causing disturbance to the public.

Fairness – some mistake surely. No injury but equal force? Hansel was hospitalised and needing corrective surgery over 18 months. 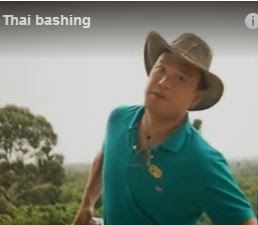 Raymond Chang’s father of course is a millionaire executive currently attending the John J Kennedy School of Government at Harvard. He was caught by Annie Hansen – Jack’s mother – coming out of the prosecutor’s office recently in Koh Samui.  His answer: “I am just being fair’.

It’s alleged Wang and Chang attacked Hansen-Bartel in part police owned Green Mango Club after they caught him arm and arm with Tiffany Turner a former pupil of the International School of the Sacred Heart in Tokyo. Tiffany was apparently Wang’s holiday girlfriend. She will however not be giving evidence.

Seems police have problems with prosecuting people for murder attacks in Soi Green Mango but have no problem with a small assault.

The suspects have now been detained for 84 days, the maximum amount of time they are able to be detained without charges. If public prosecutor has not built up a case against the five juveniles they will walk free on Tuesday. A German news correspondent has confirmed information from the Samui Court that there has not yet been any movement in this case.
Three suspects between ages 15 and 17 were arrested after the incident in the Green Mango Soi in Chaweng. Acc Pol.Col. Satit said a search of the suspects’ residences turned up a knife that was reportedly used in the attack; previous police reports indicated that Mr. Volker was stabbed by shards of glass from a broken beer bottle.

July 12, 2015 Andrew Comments Off on FLY CHINA SOUTHERN AND DON’T SEE THE WORLD