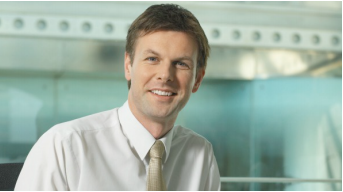 Toby Ledger appears to know a lot about exercising the muscles of his posterior ……….but jack sh*t about what to do with your savings.


British government legislation enacted earlier this year to allow citizens to take money out of their pensions and re-invest it themselves has had financial institutions and money men champing at the bit.


These include not only the banks, who run the government, but financial advisers, boiler room operators and your common garden Arthur Daley.

During the course of this upheaval, which no doubt will leave many without pensions at all, a Pattaya company entered into talks with a company called Ledger and Simmons operating out of ;  well it has operated out of five different virtual offices in the city of London since January. 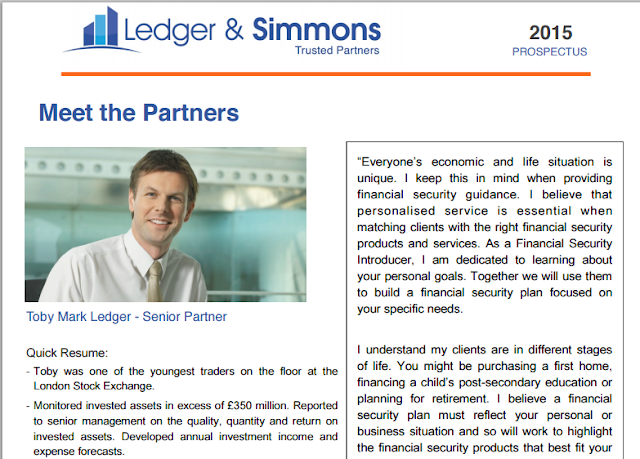 And Toby Ledger boss of Ledger and Simmons appears to be as virtual as his virtual office. But he gives himself a glowing write up on his website.  I have come to this conclusion for no other reason than that the picture of him on his website as a City of London star broker,  is identical to the picture of a man on another website giving hints on how to exercise in the office while you, presumably making all that cash – hence his lesson on a butt kickback. 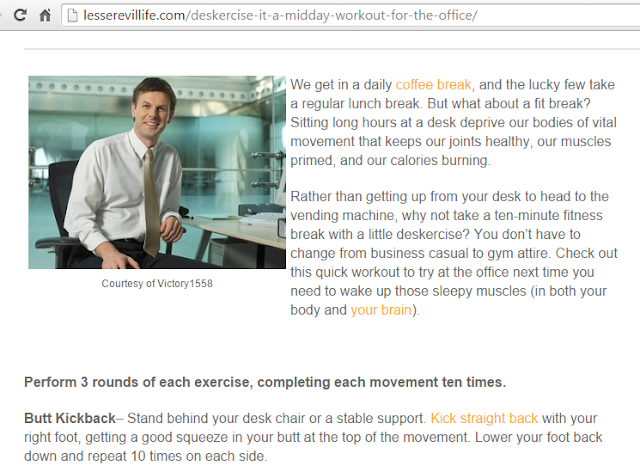 Ledger and Simmons has no history. It was started this year. Toby appears to have convinced Asia Pacific Pensions in Pattaya that he could put business their way.

A quick look at Asia Pacific Pensions’ Facebook page will show how, well, enthusiastic Asia Pacific are about British pensioners. 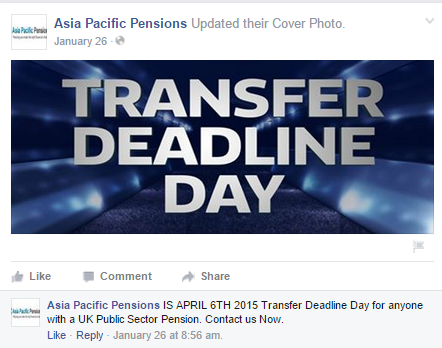 Story after story tells warns the reader basically not to let Her Majesty’s Revenue and Customs tax them and of course APP can help the pensioners out. 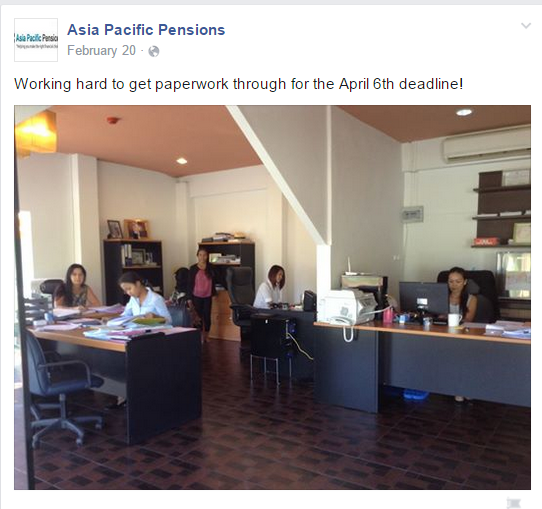 Asia Pacific Pensions advertises on its website that its preferred lawyers are British Law and it has also built up a partnership with Northern Thai Realty.

British Law is run by struck off British solicitor Kevin Harper – who was first exposed on this site.

Now if that does not ring alarm bells then putting British pensioners together with property dealers in Thailand should raise the equivalent of a Tsunami warning (but perhaps not a Thai one as they may not to work).

No matter how respectable these people may or may not be – this is Thailand with its built in inherent risks.

John Howarth admits having contact with ‘Toby Ledger’ earlier in the year but despite them not coming to any formal agreement, he says, Ledger and Simmons started using their logo and headed paper.

He said he has written to Ledger and Simmons demanded all links be removed:

“From time to time, we do get approached by UK based companies asking if we can help with UK pension transfers.

Earlier this year (Jan/Feb I think), we were approached by Ledger and Simmons, asking about this point and enquiring what the normal transfer procedure was.

“I explained we only deal via bona fide overseas pension companies and only use Qualifying Recognised Overseas Pension Schemes (QROPS).

At their request, I sent them an example of our standard Asia Pacific Pensions letter of authority (LOA) by email and told them how any enquiries were to be handled i.e. directly to APP only and not via them.

“I did not hear back from them and have had no contact whatsoever with them since that date.

“We have never agreed to work together, we have never done any marketing together and if you are telling me that this is not the case, then it is completely without my knowledge or agreement.

“Finally, thanks for bringing this matter to my attention as we will now be taking measures to determine if this company have in fact been using our company’s name without our express permission, which is of course a very serious matter.” 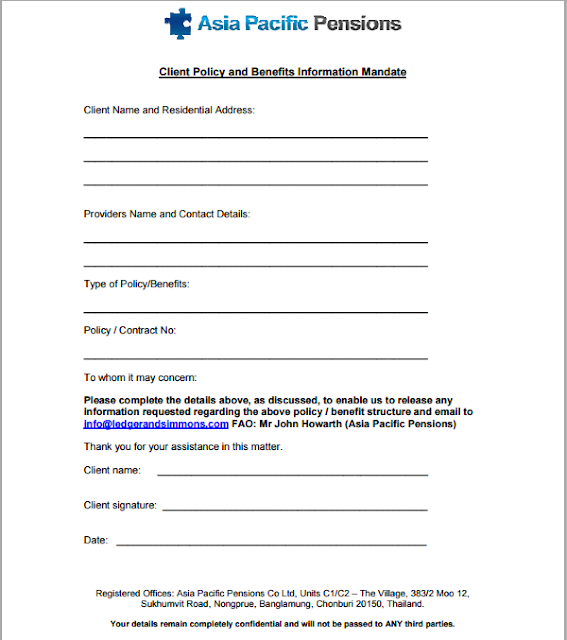 Toby was less forthcoming. When I asked him about his similarity to the butt-kick guy he replied:


“I have answered all questions regarding the situation to the relavent parties and removed any content from our website which has been published without permission. If you could be so kind as to state your involvement with any regulatory bodies I will be happy to explain in more depth any issues that your may care to raise.”

Neither Ledger and Simmons or APP of course, are registered with the FCA (Financial Conduct Authority or Thai SEC).  Some foreign financial services are registered in Thailand with the Securities Investment Commission. Most are not. 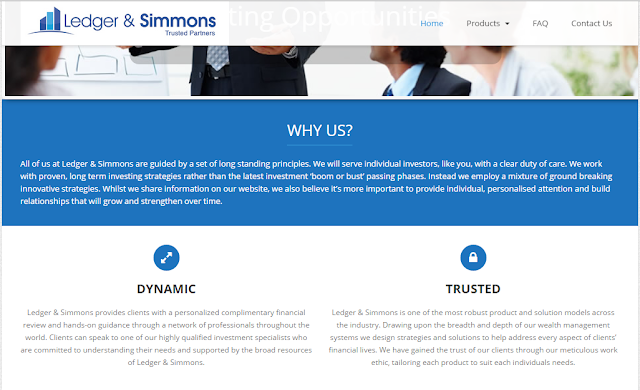 However, even if they were the SEC, does not have a credible history of standing in on behalf of foreigners and an appaling one when it comes to ‘boiler rooms’.

Further the record of Thai police prosecuting foreigners who cheat other foreigners is extremely unsavoury. They tend to favour the money,  which won’t be yours if you lose your pension. 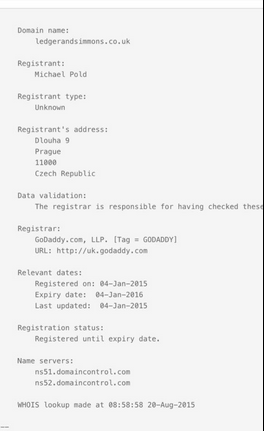 There is no suggestion at all that Asia Pacific Pensions is scamming.

It is mainly a conduit and adviser for your money and makes money from commissions.

Further a major company they are linked with is registered with the FCA. TAM Asset Management has recently been making a big play in Pattaya for British pensioners’ cash.

The combined lists of foreigners who have lost cash on property deals in Thailand and giving their pensions to independent financial advisers is quite horrific.

You may never know how much your pension fund is earning until you ask to withdraw it.

Ledger and Simmons is a different horse.

It’s dot com website is a proxy site registered in Arizona, but the co.uk website for Ledger and Simmons was however registered by a certain Michael Pold in eastern the Czech Republic.

There is a Financial Conduct Authority warning out on Michael Pold as a boiler room operator who tried to clone a genuine FCA registered company Red Level Enterprises.

The staff of at least one property company in Pattaya run a boiler room financial scamming operation.


Since publication John Howarth has written to say that connections to Northern Thai Realty had been terminated for 2 years and a link to British Law would be removed in due course.

“I have been in this business for almost 30 years now and have successfully advised over 3,000 clients during that time.  I cannot say I have never made a mistake, because that would be incorrect for anyone to say, but I can confirm that I always try to do the best thing for my clients at all times.”

Mr. Howarth confirmed again he does not advise UK based clients. However if any expat clients had followed his advance and invested in the LM Managed Performance Fund, or anything to do with LM for that matter – they would have lost everything. If he makes mistakes it seems they can be big ones.

Below is an article sourced from from Asia Pacific Pensions to Pattaya Business Supplement which is horrific in its claims.  LMMPF were giving big bonuses to financial advisers who sold their product which turned out to be little more than a Ponzi.

LM Managed Performance Fund of course went bust and you can find many articles on this site about in on this site. Many expats in Thailand lost everything and one I know lost US$1 million – all his life savings. 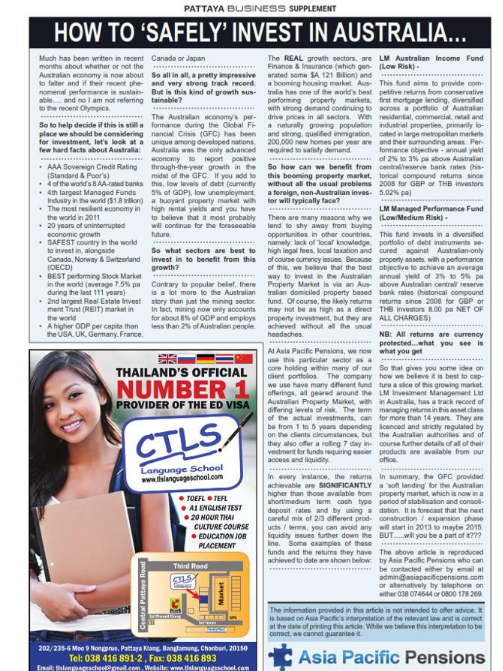 I should point out that John Howarth and Asia Pacific Pensions are recommended by Mark Bowling the Chairman of the British Chamber of Commerce of Thailand (Eastern Seaboard) so I can only hope that Mark who was a client did not put his cash into LMMPF.

Graham Macdonald of the British Chamber of Commerce in Bangkok and senior partner of IFA company MBMG did of course receive the MBE before MBMG went up on a Thai SEC investor  warning list.