New attacks against Thailand suggesting skullduggery behind the investigation into the death of that 26-year-old Luke Miller, whose body was found last week in a swimming pool on the island of Koh Tao, have been launched on Facebook as Luke’s holiday pals landed at Heathrow today. 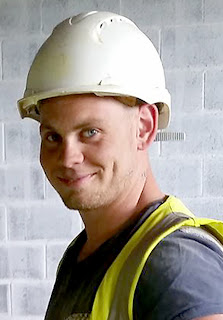 Just 24 hours after Laura Witheridge the sister of Hannah Witheridge,  who was raped then murdered with David Miller on the island last year, was forced to withdraw an emotional ‘Thailand is not beautiful’ attack,  Luke’s sister Maria and Nichola Gissing, one of his holiday companions, recorded clearly bitter criticisms of the popular holiday destination.

Luke’s death has also drawn attention to a  ‘pack attack’ in the same beach bar ‘The Sunset Bar’ where Briton Luke Miller died last week in which its claimed bar staff joined forces to beat a young backpacker ‘like a dog with a piece of meat.’

The attacks fall short of accusing the locals on Koh Tao directly of the murder of Luke Miller. Maria refers only to injustice. But murder claims have been bandied about privately and Nichola and James Gissing have returned to Britain with pictures they secretly took of Luke’s body on the Thai mainland.

Those pictures, it is alleged, show that the injuries are different to those described by police, who said Miller could have scratched his face on barbed wire while climbing up a DJ booth to dive into the pool.

Thai Police closed their investigation announcing that he drowned and may have been intoxicated. There was nothing signaling a murder, they said.

Luke’s mother went on BBC TV South East to suggest there were shortfalls in the Thai investigation.

Nichola Gissing who was on holiday with her brother James and Luke, all from the Isle of Wight, today posted on the new Facebook site ‘Luke’s Legacy’


“They hate us over there. Land of Smiles, my ass. Land of snakes and murderers, Mafia, rapists and corruption.”


She was joined by Luke’s sister Maria who said: “This won’t be swept under the carpet . . . guaranteed.

“If anything good is to come out of this crazy surreal nightmare then warning others and getting justice should be the way forward.

“That island needs all the bad publicity it can get. This can’t happen again. I wouldn’t wish this heartbreak on anyone. Xxxxx”

James and Nichola fled to the mainland after Miller’s body was transferred for examination in the provincial capital Surat Thani. Police had initially seized their passports and mobile phones. They went into the hospital and took pictures when other people’s backs were turned.

They boarded a London bound flight last night complaining the British Embassy was of little use. telling friends they were scared and had been followed. Before leaving that had stayed in private accommodation.

Nichola has also called for support for Zaw Lin and Waiu Phyo the two Burmese sentenced for the murders of Hannah Witheridge and David Miller.

“This page is also to out the real killers of Hannah and David and any other innocent person murdered in Koh Tao, the ones we know of and the ones that have never come to light. To save Wai Phyo and Zaw Lin the two Burmese men that have been sentenced to death for these murders, two innocent men who were tortured by Koh Tao police to admit to murders they did not commit,” she wrote

When I called the ‘Sunset Bar’ the Thai who answered the phone but did not give his name said: “It was an accident. Foreigners like to go wild at parties. He probably climbed onto the DJ booth and hurt himself. We have pictures. You can come here any time and see for yourself. We have nothing to hide.”

He said there was no CCTV as it had been down for about three months. This appears to contradict a police claim that here is CCTV evidence.

The line cut and I asked a Thai colleague to call.  She reported back that the man who took the call appeared to be a policeman. He said much the same. There were no secrets.  She was unable to connect again.

The conversations created more questions than answers. The only conclusion was that they supported the Thai police line.

In an emotional state Nichola also claimed on Facebook she was scared to go to the Embassy because ‘certain names, won’t mention right now, are being paid off.’

It is possible she might be confusing Embassy indifference and its policy of not interfering with the justice system of another country with some sort of corruption.

Much more specific is an account on the internet describing a pack attack by Thais on a single foreigner in the Sunset Bar on Sairee Beach, Koh Tao on Boxing Day.

Pack attacks by groups of Thais on lone foreigners are not uncommon in Thailand. They usually occur in bar areas, and usually follow a small confrontation or argument, sometimes over a bill.

These attacks can be very vicious and often bottles or knives are used.

The story on a website called Planeless Travellers (linked below) has the following account. (edited) The fight appeared to have started after a trivial argument.

“Yesterday night my friend Davy got beaten up in ‘The Sunset Beach Bar’ on Koh Tao. What happened is unacceptable.


‘The Sunset Beach Bar’ is one of the most popular places to party on Koh Tao. As always, what ended up to be a terrible night, had a pretty good start.

Ien, Davy, Yasmin and I and another friend are watching the fire acrobats in front of the bar on the beach, just like many other tourists. At some point, it’s not very late in the evening yet, about 11h-ish, Ien and Yasmin decide to go home, and I stay at the bar with Davy and his friend.

Two girls and one guy, all three of them bar staff, are hitting him. The guy is stomping him with his foot, shoes on, the girls do the same.

“ At some point the staff announces through the microphone something about a free bucket and jumping in the pool. Together with some other people, Davy and his friend decide to jump in the pool. The party goes on for a while, and I am dancing with two Finish girls I’ve just met.

The next thing I see is my friend Davy on the ground being pushed in my direction, his face full of blood. Two girls and one guy, all three of them bar staff, are hitting him. The guy is stomping him with his foot, shoes on, the girls do the same. Everything happened so fast. I try to stand in front of Davy because I was pretty sure they would not hit me. While Davy is behind me – not fighting back since the beginning, but just being a victim of their actions – they keep trying to get as close as possible to continue beating him up.

A few tall male customers see what is happening and try to get the aggressive people away from Davy. I tell Davy and his friend: “We have to get out of here!” I try to take Davy’s hand to follow me and leave, but we can’t. The aggressive people keep coming to him like dogs that want a piece of meat. Luckily, the tall guys keep defending Davy, and one of them succeeds to take him out of the bar together with Davy’s friend.

This all happened so quickly. I was – and still am – so shocked about this event. I could see it was not a fight with other tourists, but that it were people from the staff.

Whatever my friend did, I was thinking at that moment, no one ever deserves to be beaten up like this.

I talked to other customers afterwards, and they too were shocked by the severe cruel approach. It really looked like they wanted to kill my friend. Not just one push or one punch on the nose, but they were continuously hitting my poor friend who was sitting on the floor like a fetus, his hands on his head, trying to protect his face.


But what happened last night – the animal-like cruelty in which some people can hurt another human being – is something I have never seen happening in front of my eyes before.

Apparently, between when I saw them jumping in the pool and when I saw my friend with his face full of blood, they were asking about the free bucket they were promised. But they were told that they wouldn’t get it, and Davy began to argue that they should. Davy was angry and showed his fuck-you-finger to the bar lady. The next thing that happened was Davy being beaten up.

I know these things happen all the time. I have seen some fights in my life: in movies, or in the corner of a bar between drunk people. But what happened last night – the animal-like cruelty in which some people can hurt another human being – is something I have never seen happening in front of my eyes before.

Some people told us to let it go. They told us that the only thing that will happen if we go to the police, is that the rich bar owner will pay them to close the case. But we didn’t care. If everyone closes their eyes all the time to these kinds of events, nothing will ever change. If because of this some people will not go to this bar anymore, that would already be an achievement.”

The matter according to the writer ‘Charlie’ was settled with just one of the attackers having to pay a 10,000 baht fine (about £200) at the local police station, which if the man was a member of the bar staff would have been settled by the bar.

Footnote Thai police have threatened to sue Laura Witheridge for her remarks, though quite where they did not say. She is not in Thailand and Thailand has no powers to see her extradition. The Courts of Justice issued the following statement: Laura initially edited her post. Then she deleted it. Now she has closed down her Facebook page. 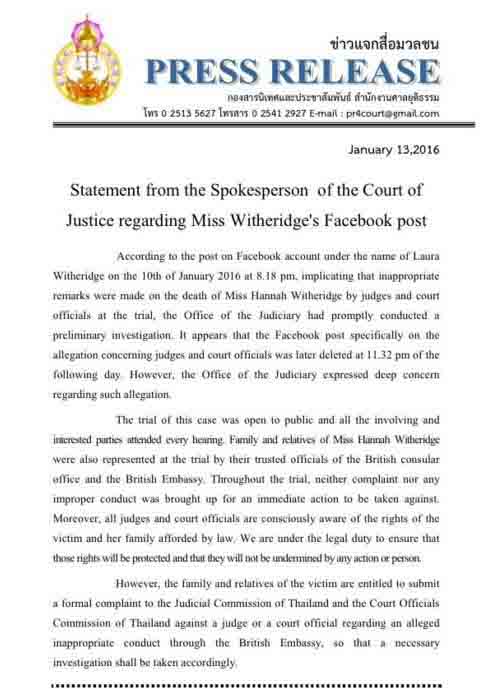 
People are in grief and angry. Some of their comments may be over the top. They can be forgiven for that. But people in Thailand know how deceitful the police are capable of being. They know how people are regularly set up. The term ‘goat’ as in scapegoat  is a common word in Thailand. The scenarios recounted on Koh Tao are uncannily similar to the experiences of the travellers in Alex Garland’s ‘The Beach’ the film of which ironically led to a tourism explosion. A bunch of travellers thought they had found their paradise. but it had a major drawback. Mafia and death. The land never belonged to the travellers. Tt belonged to a fierce local mafia, who tolerated them, but punished those who broke their rules – terminally.

KICK ‘EM WHEN THEY ARE DOWN

October 8, 2015 Andrew Comments Off on KICK ‘EM WHEN THEY ARE DOWN