A British oil platform superintendent who took on Drew Noyes, a phony American lawyer who set up a business making cash out of foreigners in Thailand, was today formally acquitted of libel at Pattaya Provincial Court.

Ally Cooper’s alleged crime was to share a link on Facebook relating to a story that Noyes, a notorious con man , was suing the alleged administrator of an English language forum in Thailand for libel.

It was a shameful  performance by the court in Pattaya with which Noyes, posing as a lawyer and local newspaper publisher, had had a close relationship.

In fact all Cooper did was share an internet UR on Facebook.  Not only that the summons was issued to him at a hotel in Khon Kaen when not only was there water-tight evidence that he was somewhere else at the time, but also the hotel manager remembered seeing the summons and returning it because the alleged customer was not there.

The issuing of summonses is entirely the responsibility of the court and not of the Thai postal service. 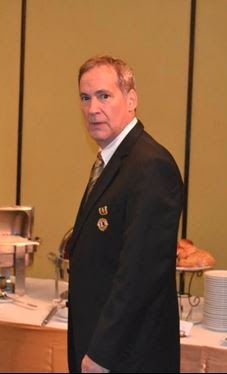 Despite that the court accepted the case and Cooper, originally from Hull, who head about the case on the net, was forced to pay bail and unable to leave the country rendering him out of work for a year.

The report which Goudie linked was a report on this site stating that Drew Noyes was suing the web forum SubZeroSiam for libel for publishing a photo-shopped picture of Noyes,  then owner of Spice gay magazine, in a gay parade.

The picture was quite clearly satirical as Noyes is known as a promiscuous heterosexual, with a history of sexual harassment of women,.

I was also enjoined in the action. I also received no summons to attend the proceedings, despite my address being documented with Immigration Police, the Public Relations Department, Department of Labour, and Ministry of Foreign Affairs.  That case was continued sine die.

Drew Noyes left for America with the permission of Pattaya Court after being convicted together with Wanrapa Boonsu of attempting to extort the Thonglor Clinic Pattaya out of 7 million baht – on pain of a police raid on his premises – when presumably illegal medications would be found, and bad publicity in Noyes’ Pattaya Times. He was arrested after the owners tipped off police and was arrested when he accepted the first 100,000 baht.

Noyes and Wanrapa were sentenced to only two years in jail. They appealed but have repeatedly refused to turn up to hear the result of the appeal judgment. Normally on appeal hearings it is one strike and you’re out.

But Wanrapa and Noyes have repeatedly delayed the process. Wanrapa Boonsu  has been off ‘sick’ twice and Noyes has been unable to return for ‘family’ reasons.

Noyes lawyer has said he will return for the judgment then.

If he does then his acquittal must have been arranged.

Despite his ordeal Ally Cooper was upbeat: “It was worth every single penny. It’s taken a huge toll on my family, especially my wife. It sends a clear message that honest decent hard working individuals will not be bullied out of opposing crooks and thugs. Drew Noyes will spend the rest of his life out of Thailand. Brian Goldie* is next for prison or fleeing.”