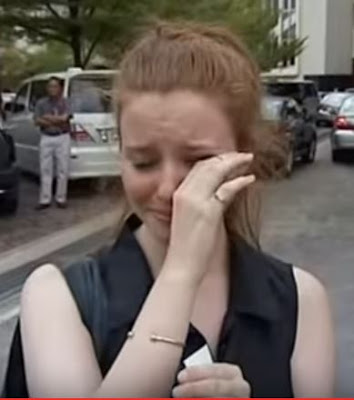 
I have been playing ‘catch-up’ recently viewing television programmes about Thailand aired in the UK while I was away. This is eased by the fact that there are so many channels repeating old progammes – so this weekend I was able to watch ‘Tourism and the Truth – Thailand’ under the BBC 3 strand ‘Stacey Dooley Investigates’.

Stacey was plucked and pushed into stardom after being featured in a series called ‘Blood, Sweat and T-shirts’ where she was shocked at the poor wages and conditions of people in Third World countries who were making clothes for people in the west.  This youngster with a heart of gold would also spontaneously burst into tears at seeing these conditions.

It was a good idea and a novel approach putting a fresh face to old problems without the cynicism of old hacks who had been pounding this beat it seems since the beginning of time.

If things went wrong – and they did – Stacey could burst into tears or react with anger – and what better place than south-east Asia than to be frustrated. 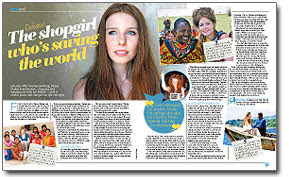 An earlier programme she reported on under the ‘Stacey Dooley Investigates’ was about child prostitution in Cambodia, where she saved a young prostitute – setting her up in a career in ‘hair-dressing and beauty’ something which many an elderly foreigner had done before her, when an education was too expensive.

After Stacey left the young prostitute called Alang did not attend the beauty course and can now be found plying her trade in the bar concourse of the Sorya shopping mall as this picture, taken today, shows, thus proving the point that despite Stacey’s kindly intentions and it being ‘ good tv’ there is no ‘journalistic fix’.

Things also went wrong when the promised a raid on a brothel employing under-aged girls totally collapsed and none were to be found – because, of course, the brothel owner had been tipped off. Stacey announced that she intended to close down the brothel forever,  missing the point that all brothels operate in Asia because police allow them to, whatever the appropriate country law is.

Stacey went on to do a programme about the Thailand and the mad drug ‘yaa baa’ and going on two raids, one a farcical raid on a nightspot in Bangkok where no drugs and no infringers were found, least of all Brits,  and another with police in Chiang Mai where she also witnessed nothing being found, but was later taken to see a massive haul which had just been seized, but not allowed access to the accused, leaving the savvy viewer with the impression that this might have been old news.

Stacey ended up almost pulling her hair out outside ‘Bangkwang Prison’ after being promised interviews with Brits inside –  a promise which was not fulfilled. The cameras did not show how she reacted on this occasion but she went on the programme to suggest that she had been threatened with banning from Thailand for not being allowed to tell her story properly. Good TV.

Actually, she was trying to ‘Britify’ a story which was not really British. Most Brits in jail for drugs offences in Thailand are there for the old hardies, cocaine, ecstasy, and heroin – except those who have been set up of course – because yaa baa is the easiest drug to slip into evidence.

Considering some 2,500 people were ‘injudicially killed’ during Thailand’s ‘War on Drugs’ and historically the heroin trade from the Golden Triangle, which is where the ‘yaa baa’ comes from, was traditionally controlled by rival factions in the Thai Police and Army, who banked with the Bangkok Bank bringing the bank to the fore, I was surprised Stacey did not give this part of the story attention.

Never mind, in the programme ‘Tourism and the Truth – Thailand’ broadcast in 2011 Stacey went to work as a chambermaid at a hotel in Phuket and of course could not keep up with the skills of those who had been doing it for years.

More tears; but she did point out the gap between the rich and the poor – now the third biggest gap of all the world’s countries – although she missed the point that technically about half of the beach side properties have been constructed illegally anyway.  Not that the law has much to do with Phuket.

And then she tackled the question of Thailand’s sea gypsies, specifically those on Rawai Beach, Phuket, who have been forced off their land to make way for hotels built by Thailand’s ‘rich elite’.
This programme was a real ‘humdinger’. 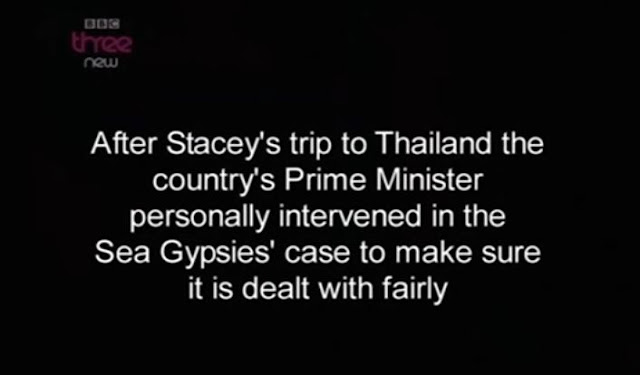 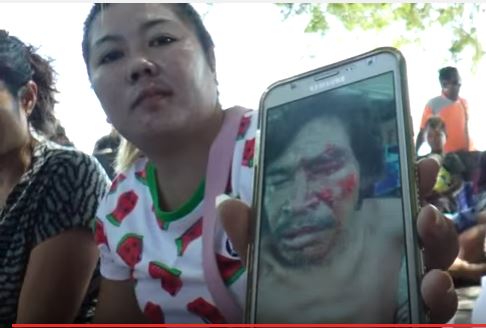 Still Stacey welled up with tears of happiness as the grateful Moken leader waved goodbye thinking a real difference had been made and the programme ended with the announcement.

‘AFTER STACEY’S TRIP THE PRIME MINISTER OF THAILAND PERSONALLY INTERVENED IN THE SEA GYPSIES’ CASE TO MAKE SURE IT IS DEALT WITH FAIRLY’.

Stacey promised the Thai government she would continue to monitor the case.

And there you have it. But of course, WE know that is a load of old baloney. Fast forward to 2017 and the sea gypsies are in a worse state than ever.

Thai government statements should never be taken at face value. Perhaps the producers could have consulted the BBC man on the ground.

Things came to a head last year when the sea gypsies, also called Moken or Chao lay, were attacked by thugs working for Baron World Trade Limited who were building hotel on their land on Rawai Beach.

Perhaps Stacey’s investigation could have involved the owners of the land, and who originally stole the land from them.  They would have found out that Baron World Trade Ltd, which was formed in 1900 and has been buying up land ever since, has amongst its five directors a certain Chalee Sophonpanich, who is the son of Bangkok Bank Chairman Chatri Sophonpanich. There’s that bank again.

The latest promise from the Thai Government came from Deputy Prime Minister Deputy Gen. Prawit Wongsuwan who last year ordered state agencies to resolve this dispute and announced that there must not be any more violence. “The wrongdoers must be arrested.”

Anybody heard of any resolution or arrests?

No, despite the DSI saying that the gypsies had a legal claim to the land and that there was clear evidence they had been there for over 60 years the company has secured the co-operation of the local governor, district chief, district militia and of course police – and Chalong Police are amongst the island’s most notorious.
So, so much for government statements.

The attitude of the company is best summed up by the it’s representative Chatree Madsatun who told the Phuket Gazette that he was not worried about any law suits and was willing to see the gypsies in court.


“I have no idea why they are doing this. We have the legal rights to the land. Moreover, at least nine of the sea gypsies are wanted by the Phuket Provincial Court for damaging our property. I pity them. Now, 203 of them will be the ones who pay the price.

“These human rights activists are using them as a human shield. If we win the case, the sea gypsies will pay, and how could they possibly have the money to pay for the lawsuit.

“This is a civil case. But if they sue us in a criminal case and we win, I will sue them back and they will be the ones who go to jail.”

“We agreed to pause the construction because we thought we could broker an agreement with them, but that’s fallen through, so we’ll keep on doing our work.

“The NGOs and human rights activists shouldn’t do this to the sea gypsies. Those people have no idea what they’re facing.”

So, this is of course the fault of human rights activists, journalists and, I presume Stacey Dooley.

May 17, 2016 Andrew Comments Off on FINNS TO TESTIFY IN ANDY HALL HUMAN RIGHTS TRIAL