FROM ANDREW DRUMMOND,
SURAT THANI, THAILAND
May 1st 2011
Two children of an Irish businessman were thrown into a well while his housekeeper working  with ‘organised criminals’ set about to defraud him of his mansion and six other houses on the Thai island of Phuket, it was claimed today.
Irish author and former Dublin clothing manufacturing boss, Colin Vard, 57, said he had to go on the run with his two children Jessie, 12, and Daire, 9, after initiating court action to get his houses back. 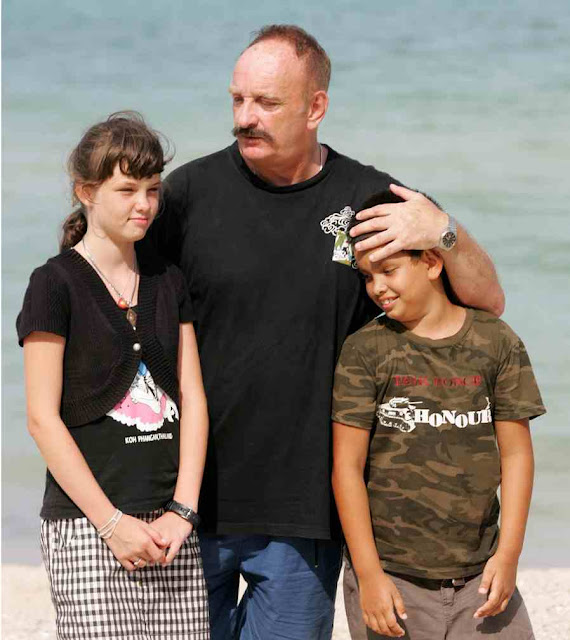 Colin Vard and his family – on the road in Thailand since last June
He says he has been told that in Thailand the lives of him and his children would be a lot lot cheaper than the value of the property taken, over 1.3million Euros.

‘We have been advised by the police to move location every three days. I have been told to change my phones and SIM cards and not to contact anyone who could be remotely connected with this,’ he said at a secret location in South Thailand.’I am virtually penniless. But what I cannot ever come to terms with is what happened to my children. They have nightmares every night and wake up screaming. They are reliving what happened to them in the well.’

The current state of homelessness of the former millionaire from Arklow, County Wicklow, follows an almost incredible series of events, precipitated by his house-keeper, a person local police perceived as his former Thai ‘wife’ Sukumpa, from the northern Thai province of Roi-et.

Mr. Vard met Ms. Sukumpa shortly after arriving in Thailand 10 years ago with his daughter Jessie, then two. He admits meeting her in Emporium mall in Bangkok and later on at the city’s Hollywood disco. He took took her on as a housekeeper but for a short while she became his lover and quickly fell pregnant.

“Except for one or two nights we never slept together. We slept on different floors from the off.”There was never a relationship From day one Nittaya slept on the 3rd floor of the house I had my own apartment on the 2nd floor.”

But he said he realized there was not going to be a relationship. She remained in separate quarters in his $28 million baht (600,000 Euro) house in Chalong, Phuket, and he also bought her a small restaurant.  He thought the arrangement was working amicably and that she was happy with it.
In those ‘two nights’ Nittaya  had become pregnant and had a son ‘Daire’ and they started bringing up Daire jointly.
He never anticipated what was about to happen.  Without his knowledge he was gradually being stripped of everything he owned.  By mid-June last year Nittaya Sukumpa, he said, upped and left with his car and their son Daire, leaving a message through her sister that if he wanted to see his son again he would have to pay 5 million Thai baht (113,000 Euros) 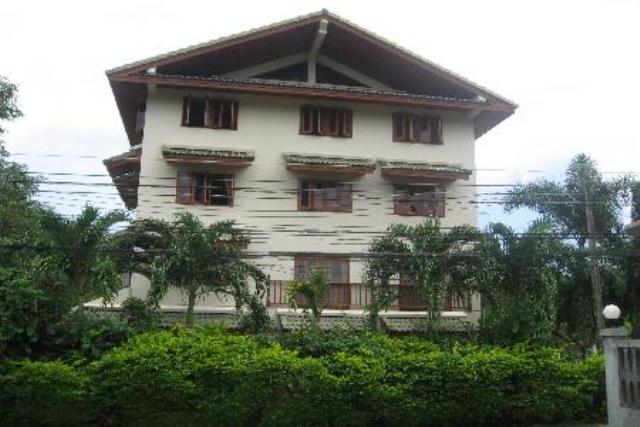 Colin Vard’s mansion in Chalong
He could not contact her, then when someone asked about his properties he found that the paperwork for houses bought in his company name was all totally invalid.  The house deeds had all been transferred into his housekeeper’s name.
At the same time, checking his bank account, he discovered that she had not deposited over 1 million bahts from rents he had received on his property.
Though clearly he should have checked his bank account earlier Mr. Vard said he did everything else by the book.

‘When I bought the properties I did everything correct, in fact doubly correct. This could only have happened with the help of corrupt lawyers, officials and criminals.’

For eight months his pleas for help were ignored.  The Irish Department of Foreign Affairs would do little but suggest he contact a lawyer.


‘Daire, like Jessie is an Irish citizen. I was disgusted at my government’s attitude. An MP even raised my case and got lies back from the Irish government indicating they were doing what they could.’

His efforts to get police to investigate went unheeded.  Even Pavena Hongsakul, a Thai campaigner for children’s rights could do little to help him, or if she did police in Chalong, Phuket, seemed to have ignored her.

‘Basically nobody wanted to investigate. It was like getting money from a foreigner was a national sport. It did not seem like I was ever to get justice,’ said Mr. Vard.
But finally two months ago he met a young lawyer Pitchaya Tesramphan  who put him directly in touch with an officer at  the regional police headquarters on the mainland in Surat Thani and also notified the a journalist from Thai national newspaper ‘The Daily News’ who put in some calls.
The young woman did some research herself and worked out what had happened.  It was a mafia sting.  In Surat Thani Police Colonel  Cherdprong Chewpreecha, nicknamed ‘Chilli’ was quick on Nittaya’s trail.
He traced her to Nong Khai, a province of Thailand bordering Laos, where she had gone to live with her boyfriend a ladyboy called ‘Dang’.  Nine-year-old Daire was returned to his father, who a court quickly ruled should have full custody.
Nittaya quickly confessed and is now in Phuket Prison on fraud charges and Police Colonel Cherdprong realized that this was not just another case of a ‘woman scorned’.
And now an investigation is under way into a group which consists of criminals who are targeting foreigners with Thai wives or live-in girlfriends.
Said Lt. Colonel  Cherdprong (above right) : ‘Nittaya was a county girl with no education. She could not have carried out this swindle by herself, and it is unlikely that she kept more than 10 or 15 per cent of the proceeds.’

Colin Vard is more specific.  ‘ I know some of those involved and they include lawyers, officials, and police themselves.  I am very happy this case has been taken over by police at the Regional headquarters and am very grateful to this policeman in particular. He is Daire’s favourite uncle.’

It was only when Nittaya was locked up in prison, he said, when he heard what had been happening to his children when he was away from home.
Jessie had regularly been beaten by Nittaya and one time had  even been taken home from school by a teacher alarmed at her injuries.  Mr. Vard was then shown those pictures.
The children said that had been told by Nittaya that if they complained to their father they would be killed.

‘I still cannot come to terms with this. How can anybody do this to children?’ said Mr. Vard.’They were left in the bottom of a 15 metre well for two days in shallow water. They were padlocked in. They could do nothing but scream and cry.  They heard passing cars but nobody could hear them.

‘They were stuck in the well with big centipedes and all sorts of other insects. Every night now they still wake up screaming.

‘They were rescued by my gardener who heard their screams, broke the padlock, pulled them out, and took them to his own home.’

Said Dublin born Jessie: ‘Nittaya called me to come to the well. When I got there Nittaya threw me into the well but I fell across it. She pushed me down with her feet.  Then a couple of minutes later I heard Dang (pictured right) shouting ‘Die!’ and Daire fell on top of me.

‘They put the cover on the well. We cried and screamed for what seemed like two days in the water at the bottom of the well.  Then we heard someone and we started shouting again. That’s when the gardener got us out.’

Police Colonel Chewpreecha said: ‘It is hard to believe this woman did these things. But if you ask me is it possible, then the answer is yes.  But the children are vague on things like dates,  and the gardener is scared, so unless we get solid evidence we cannot prosecute.

‘There are good and bad people in every country. Foreigners coming to Thailand seeking to date local woman should be careful. They should check the background.

“Most foreigners  looking for a woman, have relationships with girls from bars. Some of them are good, maybe 10 or 20 per cent, but most are not.’

Mr. Vard, author of such books as ‘Princess Finola’, ‘Tatiana: ‘Gift from the Fairies’ and ‘Pirate Queen’ said: ‘When I visited Nittaya in prison and asked her why she did these things she replied: ‘I loved you but you did not return my love.’
A number of foreigners have been murdered in Thailand at the instigation of their provincial Thai wives.
They include Toby Charnaud,  44, an English farmer, who was beaten to death by his wife’s family, who then placed his body on a barbecue and cut it up and scattered it around Kaeng Krajan National Park in Eastern Thailand, and Briton Ian Beeston, 72, who knew and told his friends he was about to be killed. 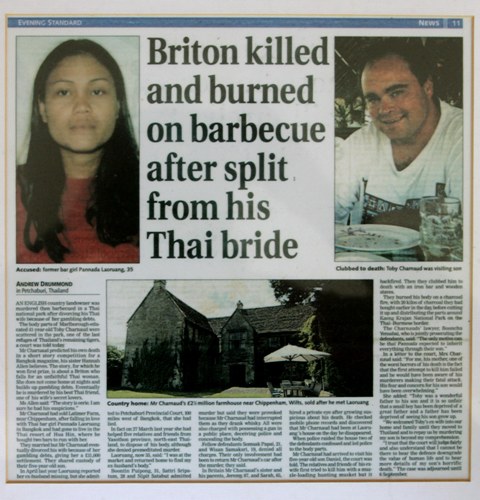 Toby Charnaud: Killed on the orders of his Thai wife. Not typical, but not unusual either.
He waited alone in his mansion in Roi-et province with a stun gun but was unable to beat off his Thai wife’s lover who beat him to death with a lump of wood.

December 14, 2013 Andrew Comments Off on BOILER ROOMS DOWN! CLAIMS ‘THE BOILER ROOM BUSTER’

July 11, 2013 Andrew Comments Off on Alleged child molester, two convicted fraudsters, and a US Warden seek help from Google-