U.N. OUTRAGE AS FORMER GANGSTER GETS FAKE UNESCO CROSS AND CERTIFICATE OF HONOUR!

The head of Pattaya City’s Foreign Police Volunteers and boss of Pattaya People newspaper, radio and television, has been honoured in a FAKE United Nations medal and certificate SCAM.

Two Pattaya newspapers the Pattaya People and the Pattaya Times triumphed the award of a UNESCO  (United Nations Educational, Cultural and Scientific and Cultural Organisation) Service Cross and Certificate of Honour to Niels Storm Martens Colov at a ceremony held at a hotel in Bangkok.
But I can reveal that the whole episode was a scam. The stories published by Dane Niels Colov, and American Drew Noyes are a load of old tosh. There are no such UNESCO awards.
The office of UNESCO in Bangkok has issued a statement:
“This is a fraudulent use of UNESCO’s logo and identity.

We have informed our HQ and will take the necessary action.”

Eleven other people are also reported to have received similar awards, eight of them Thai. But the newspapers published no further details. In a video on Pattaya People’s website one is seen to be wearing the smock of the ‘Knights of Rizal’.

Neils Colov however insists the occasion was real enough: ‘I can think of many reasons why UNESCO should give me an award,” he said. “What’s the point of the scam? It must have cost some money to set up. The meal was delicious.”

Niels Colov has already been inducted into the Knights of Rizal together with his friend and fellow publisher Drew Walter Noyes.

Some might argue what was the point of that too. Why would Colov, Noyes, the Mayor Ittiphol Konplume want to join a Philippines nationalist organisation..in Pattaya?

That also cost someone money to set up.

UNESCO’s regional headquarters in Bangkok have launched an enquiry. UNESCO, a spokesman said,  does not issue such awards. It does give medals but those go to people who make noteworthy contributions in the fields of science,education and culture.

Why would a U.N. official from Cracow give awards in a hotel on Bangkok’s outskirts. Is he living the dream?

This may explain why this occasion at the Richmond Hotel in Bangkok however appears to be the only public occasion in which anyone has been awarded either a Certificate of Honour or a UNESCO Cross.
All these people were tricked. These awards do not exist!

The cross is a Christian religious symbol and unlikely to be used in any U.N. awards.

In the Pattaya Times the editorial says the award was presented by Dr. Mathias Kunze President of the UNESCO Center (sic) in Cracow, Poland. The ‘Certificate of Honor’ (It’s an American run newspaper) and service crosses were awarded for ‘outstanding public, scientific, and cultural engagement for human life and education’.

Local publishers American Drew Noyes and Colov have been known to use hyperbole about their achievements.

The Pattaya Times, a partner paper of the Bangkok Post, is in the control of Noyes who is due for trial with his wife Wanrapa Boonsu on February 5th on a charge of extortion. He has a biography on naymz.com which suspends all belief.

Mr.Colov, is a close friend of Noyes. They together proposed linking Pattaya with the Philippines sin city of Ángeles and Colov has been telling people in Pattaya that, with his help and the help of friends,  Noyes will be acquitted of attempting to extort the Thonglor Clinic, Jomtien, out of 7 million baht.

.
The Pattaya People, Colov’s own newspaper reports:
“The stylish Richmond Hotel in Bangkok was the venue to present Service Crosses from the UNESCO Center’ in Cracow, Poland, to a group of 8 distinguished Thai people and 4 foreigners residing in the Kingdom. One of the expats so honored  was Mr. Niels Colov, the CEO of the Pattaya People Media Group.
Professor Dr. Mathias Kunze, the President of the UNESCO Center in Cracow introduced the objectives and structure of the center, and explained that Service Crosses and the UNESCO Certificate of Honour was awarded to 12 people for their outstanding public, scientific and cultural engagement in human life and education.

He further stated that UNESCO’s mission is to contribute to the building of peace, eradication of poverty, and sustainable and intercultural dialogue through education, sciences, culture, communication and information.
There appears to be no specific citation included.
But that’s not surprising. The incident also happened on November 23. No explanation has been given as to the delay in printing by the Pattaya Times, but publication of this newspaper is somewhat erratic..
It does however cast doubt on Mr. Colov’s total transformation from being a gangster in Vesterbro, Copenhagen’s red light area,  who was jailed for pimping, assault, robbery and vandalism to the man he is today.
That is of course, if you follow his newspaper,  a shining light in the expat community in the resort city, the CEO of the Pattaya People Media Co., chief of the Foreign Police Volunteers, Knight of Rizal, Buddhist and vegetarian and of course most importantly consultant on everything that expats may wish to spend their money on.
Mr. Colov has however been in close touch with Danish gangland figures long after his ‘reformation’ as, he says, a member of the ‘media’.
A Facebook friend Lonne Fristrup,  pictured left, was a career criminal. This is what the Danish newspaper said about him when he was arrested in Pattaya in March 2005 and sent back to jail in Copenhagen.
Leon Erling Jensen Fristrup aka Lonne arrested in Thailand and detained by immigration authorities in Thailand. He is wanted in Denmark for a number of crimes. Since Lonne went to jail for the first time in 1963, he has spent nearly half his life years in prison. Among the judgments he has received include: theft, violence, drugs, cigarette and alcohol smuggling, pimping, procuring, receiving stolen goods, extortion and help prisoner escape. Lonne traveled into Thailand as a tourist and has been living with his Thai wife in Pattaya, 70 kilometers from Bangkok.
UNESCO officials in Bangkok could not readily locate either the UNESCO center in Cracow or Dr. Mathias Kunze. Enquiries are continuing as the organisation is vast.

But one thing they are sure of is that what went on in the Richmond Hotel was a pantomime!


Mr. Colov declined to put me in touch with the promoters of the event or any of the other recipients which included ‘respected members of Thai society’.  On behalf of Dr. Kunze he has requested withdrawal of this story.

However he has not provided any contacts for Dr. Kunze while stating that the mysterious Dr. had sent him a long email explaining and documenting the legality of the awards.

Below; the Pattaya Times story. 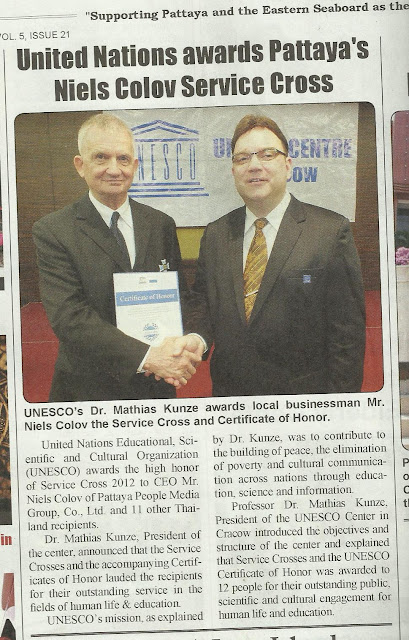 “The issue is now with our legal affairs department in Paris and they
will deal directly with the organizers of this event. On our side, all we can
say is that this event had nothing to do with UNESCO. The name of the
Organization was used in a fraudulent way.
Thank you once again for having alerted us.

July 4, 2011 Andrew Comments Off on Caught on Camera – But Who Gets Rich Out Of This Deal UPDATED

A Paradise Island Shooting – Splashpackers – and the Sex Pistols

January 8, 2013 Andrew Comments Off on A Paradise Island Shooting – Splashpackers – and the Sex Pistols