This space was reserved for an exposé of a human trafficking link between Pattaya and the UK. I am afraid it was however sort of hijacked by two free beers, a rather nice Cottage Pie, so large I was unable to finish it, the intransigence of the U.K. Border Agency, a footballer who kissed Elton John, and an audible yawn from a Fleet Street news editor.


The thing is I had planned a short trip to London with a lady boy. I had not acquired the lady boy yet but had all information at hand not only to acquire one but also take her to Paddington station and get a free return ticket in the process plus five hundred quid.

It can’t be that much of a secret that a British pub in Pattaya is one of the interview points where Brits with little cash  can be fixed up to courier lady boys to the UK without a visa, because three separate people had called me about it and given me the phone numbers of the ringleaders.

Did you read that right? Yes. Without a visa. Well at least without having to get one before departure to the UK.

Here’s how it goes. You and your lady boy get bought a ticket to any country which accepts Thais without a visa. There are quite a few in South America which is of course way past the UK. The ticket is routed through the UK arriving at Heathrow with a connecting flight a few hours later to, say Sao Paulo, from Gatwick.

Now all you have to do is get your story right at Heathrow. Perhaps you have promised your lady boy partner that she would definitely see a Brazil nut tree before she died.  Actually anything will do. The reason for you both going to Brazil is no consequence to the UKBA.

You can also wave around a National bus timetable and ask the officer where the bus stop is to Gatwick.

A variation of this is to get a flight to Paris on a European visa and then your lady boy announces that either her close relative or her surgeon has been taken ill and is on death’s door and you need to get back to Bangkok in a hurry – but the only flight is from Heathrow and you arrive in the UK on one of the Paris shuttles to Gatwick for a connection departing Heathrow.

Voila! That should all get you a transit visa which will last a day at max.

Anyway I tried the ‘We’re all going to hell in a handcart’ foreign editor at the Daily Mail, and Britain for the British Daily Express and finally the SUN.  No interest at all.  The SUN presumably was not interested because I guess it might actively promote the arrival of more big tits, medically enhanced or not. But I was surprised at the silence of the Mail and Express.

I also went through the motions of contacting the UKBA.

This is never a good idea at the best of times but I needed to know the legal situation of what they would do to me or my nominee once we had declared we had smuggled our own little Ting Tong Macadangdang into Britain.

A few years ago with London Weekend TV for Channel 4 Dispatches I had helped expose a few of these rings in Bangkok. (It was not all smooth running – see this link).

During the process we told British Immigration that three prostitutes and our inserted Thai woman were going to the Embassy the following day with the intention of prostituting themselves in the UK.

We gave the name of our woman.  So guess what happened? Our woman was the only one not to get a visa.

The UKBA gave a nonsensical answer to my email to them. This is of course  Home Office and Foreign Office policy. So I ditched the idea.

I had to go to a ‘Life on Mars’ UBKA officer I knew in London for a sensible answer. He basically said that at the moment there was little the UKBA could to to plug the gap in the visa laws, short of escorting every transit visa recipient to their onward flight.

“All the villains know about this. Word has got out. Lots of people we suspect are doing it.” 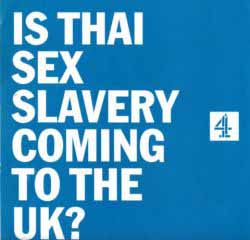 I finally went along to Pattaya, where, and this is not reported in the local media, 75 per cent of the bar girls have now been replaced by their aunts, mothers and even grandmothers, such is the desire by western men to get a bit of the other.

The bar is run by a chap who may have been the ‘fastest milkman in the west’ and I found that I knew the guys. Not only that I’m more than guessing that they were a little bit alarmed at my arrival because a few phone calls went out after I left.

But the cottage pie was great and so were the beers. One of them even prompted by me saying ‘I’m publishing tomorrow’.

My evening’s entertainment was rounded off by Anthony Hopkins, a former Watford Footballer, who admitted that he had been kissed full on the lips by Elton John. He then went on to talk about Samantha Fox, so we can guess which era he’s from…mine! I was going to tell how Elton had grabbed my *** in a bar in Hawaii in 1981, but the conversation needed to be elevated.

Anyway the point is this. Most of these lady boys and prostitutes are going to London willingly where they can earn up to £200 a trick I am told. Some couriers see this as a ‘social service’.

But not all are trafficked people, because that is what they are, are treated well. There have been cases of women being tricked completely. There have been beatings. They have to pay off massive debts first including presumably the services of the guys in Pattaya. So if anybody is planning to do one of these trips please ask your conscience first….and you never know the UKBA might just leap into action.

Facts Used To Malign Canadian Victim – Letter To The Nation

January 12, 2008 Andrew Comments Off on Facts Used To Malign Canadian Victim – Letter To The Nation