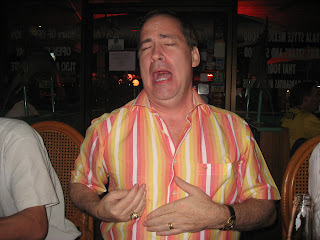 Controversial Pattaya publisher Drew Noyes was the centre of an angry scene at Pattaya Provincial Court today after he told a Dutch businessman that if he did not withdraw a case against him he would send him to jail.


Drew Noyes, 57, founder of the Pattaya Times newspaper, who runs a business call One Stop Service, had approached Dutchman Theo van der Schaff and told him: ‘You know the money is mine, Theo. Withdraw the case or I will send you to jail.”

The Dutchman from Alsmeer, Holland, let rip with some Chaucerian adjectives which could be heard from within Court Number 6.

Inside the court lawyers for van der Schaff told the judge that their client had hired the services of Pappa Co. Ltd, Noyes’ forerunner to his ‘One Stop Service Center’ (American managed) to solve a problem with his former Thai girlfriend.

He had commissioned PAPPA for over 400,000 baht which was to include fees for removing his property from his girlfriend’s name. He also sent Pappa Co 2.5 million baht to pay as compensation to the girlfriend. Noyes was instructed that negotiations with the woman should be done with tact and discretion.

In fact the woman was not offered the 2.5 million and she threatened to call the police on Noyes’ delegation.
Drew Noyes, 57, and his common law wife Wanrapa Boonsu denied the fraud charge claiming that the 2.5 million baht was an additional charge.

Both defendants are currently on trial at Pattaya Provincial Court on a charge of attempting to extort the Thonglor Clinic, Jomtien, out of 2.3 million baht, on pain of a police raid and bad publicity in the Pattaya Times. The alleged take-down of Theo van der Schaff occurred while both were on 200,000 baht bail on the extortion charge.

Mr. van der schaff refused to mediate. The case was set for trial for August 28th.

DREW NOYES OUT ON BAIL AND OUT OF CONTROL