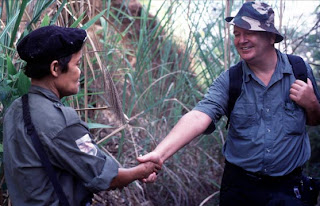 I am afraid I put the cat among the pigeons when recently I announced I was planning to leave Thailand and return to the UK in the New Year. But I should re-assure readers that contrary to bowing out quietly I will be ratcheting up in the coming months…and the first to get the treatment will be this website.

Because I am leaving, and I do not mean when the new years starts, I’ll stay accredited for another year at least, does not mean this site will close down. There is still a lot of unfinished business.

On the contrary I hope to provide a site which will eventually support itself. That will probably mean adding content from contributors but we will not give up its core values which I hope are honesty in investigations, integrity, and most of all not fearing to call a spade a spade.

And of course to expose those people who come to Thailand to exploit others.

I am still trying to find someone maybe not long in the tooth, but worldly wise, not unused to getting clobbered, a little thick skinned, and also a little determined, to sit in and face the buckshot. That is a little bit difficult. The rewards are more spiritual.

I was very touched and flattered this week to see some comments on the website Pattaya Addicts. Its not a website that I am a member of and I believe I remember turning down an advert for Pattaya Addicts on this site having seen some sort of competition there involving bar girls and,er, how many could be done in one day in Pattaya Soi 6.

However it takes all sorts to make the world and I was flattered to get some unsolicited support. Below is the first page – I’ll stick at that!

But first a sample of what the site may look like in two or three weeks. More announcements as we progress and we will keep advertises/sponsors informed of how the new format will affect them. 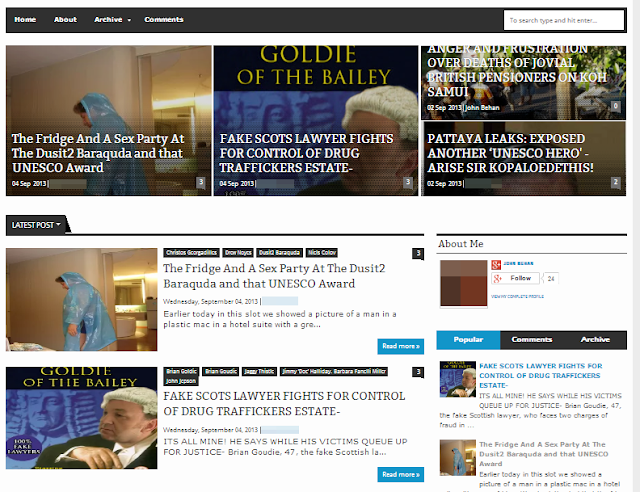 #1  asmodeus
Pattaya Warrior
Posted 01 September 2013 – 05:56 PM
Sad news indeed…he’s does more to report pattaya news than the entire local media businesses put together.
There are probably many people who have avoided being scammed or ripped off as a result of his stories…

Andrew Drummond September 1, 2013 at 11:28 PM
Yes. That’s been on the cards for a long time. Have had a great 20+ years or so. And of course I will stay till I have finished the business in hand. But I have to think of my kids but the arrival of a third changed things, and watching 25 years of governments doing sweet fa with their education system has rather clinched it for me despite encouragement from readers here who have successfully brought up children in Thailand. So this time next year I may be in rural Berkshire having fun with my kids on the Thames or Kennet come rain or shine. I have been through a few British depressions. Does not bother me. Can sneak back anytime….kids permitting.
I love this country but why is it that good honest foreigners here to help out Thailand get it in the neck, while the criminals and spivs live the high life? No wonder there is a local expression. ‘Truth will never die. But if you tell it you surely will’. My time comes up in Thailand next year. I am having my kids educated in the U.K. When they are older I hope they will stand up and fight for what is right like Dr. Ellis.
http://www.andrew-dr…im-against.html

#2  stickyfingers
Pattaya Warrior
Posted 01 September 2013 – 06:16 PM
Pity as he reported the truth and exposed most of the con men which have businesses in Patts especially and upset quite a few people that live in LOS (land of scammers).
Hope he keeps up the work until he goes!!

#4  kiniyow
Not doing what other X Pats do

Posted 02 September 2013 – 04:17 AM
Man of Truth…An Icon that will be surely Missed
When in Thailand Save Yourself First

The Thai education system does lack quite a bit. Having said that, my two luk-krung boys were educated in Bangkok at two very good schools up to M3 & M1 when we pulled the plug and moved back to farangland.  They then went on to university and did very well.  One graduated in business and the other in economics and both are employed in their fields of study.

#6  awinkl
Supreme Pattaya Addict
Posted 05 September 2013 – 07:10 AM
Sad news indeed, but I hope that he will finish the “Noyes situation” before his departure – as well as other pending investigations that certainly need to be exposed for all their mis-deeds!!

#7  enterprise
Advanced Pattaya Warrior
Posted 05 September 2013 – 07:32 AM
Sad news he fought a good fight and tried to expose some of the scammers in Thailand

Pattaya , Pattaya , poo-ying like LIE you mak mak .
#10  jinx
Advanced Pattaya Warrior
Posted Yesterday, 08:35 AM
Andrew will be a big loss alright. I wish him all the best in his future endeavours. I always enjoy characters who can never turn the other cheek, and must have put himself in grave danger at many stages during his tenure in Thailand.
I like the reference he made to Dr. Ellis as well, unfortunately Andrew will return to a western Europe which has endured severe political and cultural changes during his twenty five years of blissful exile. I hope the rural landscape he craves for is as green as he believes, and that the form of education he believes in is as strong as it once was.

The Monger Games
Posted Yesterday, 12:11 PM
What Can I say?
Andrew is a great reporter and a great man. he interviewed me when I first moved to Thailand after a big news big money divorce in the UK. He was kind polite and accurate in his reporting Good luck Andrew and may your God go with you Harry

#12  expatdude
Pattaya Warrior
Posted Yesterday, 01:36 PM
jinx, on 07 Sept 2013 – 09:35 AM, said:
Andrew will be a big loss alright. I wish him all the best in his future endeavours. I always enjoy characters who can never turn the other cheek, and must have put himself in grave danger at many stages during his tenure in Thailand.
I like the reference he made to Dr. Ellis as well, unfortunately Andrew will return to a western Europe which has endured severe political and cultural changes during his twenty five years of blissful exile. I hope the rural landscape he craves for is as green as he believes, and that the form of education he believes in is as strong as it once was.

This Week’s Quiz
THE GREAT TRAIN ROBBERY
And finally a picture for all you old lags down in Pattaya. This picture was taken around 89 when there was an attempt to kidnap Ronald Biggs (partially successful; they got him out of Rio but surrendered him to the wrong authorities in the Caribbean) by John McKillop, Freddie Prime (ex-Scots Guards whom I knew well).  We got a lot of the train robbers together. I am on the left (in the centre with the camera is photographer Ian Cutler ‘Camera Assasin’). How many can you recognise. I can see getaway driver Roy James and Buster Edwards and Ronnie Leslie who busted Biggs out of Wandsworth – any others! It’ll probably come back to me. 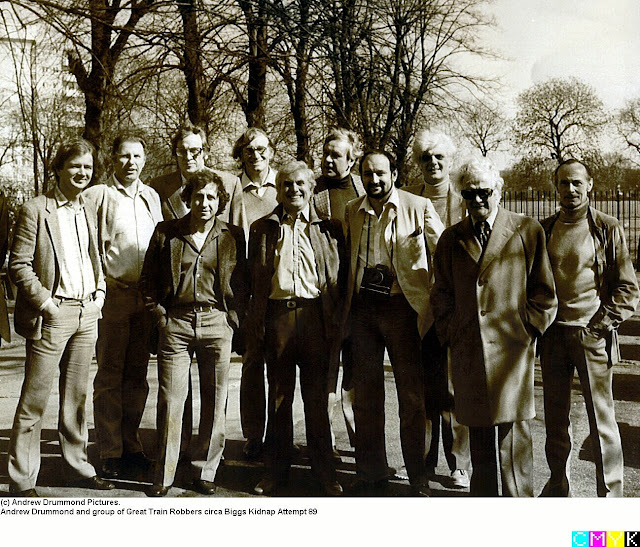 From The Family Of Leo Del Pinto – Gunned Down By Police

February 12, 2008 Andrew Comments Off on From The Family Of Leo Del Pinto – Gunned Down By Police