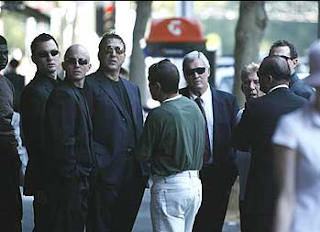 Once wanted in three different countries and on the run from British Customs, the Drug Enforcement Administration, and Dutch and Spanish Police, the ‘Tartan Pimpernel’ from the British crime underworld and Spain’s ‘Costa del Crime’ comes clean on www.andrew-drummond.com tomorrow.

He’s been linked to the Columbian Cartels, was allegedly the leader of the ‘Delta Crime Group’, and allegedly also ran with the Russian Mafia, according to Wikipedia contributors.

But now he is at home with a Russian girlfriend on the Thai island of Koh Samui. Has the island tamed this man who can also claim to be a ‘Teflon Don’ who has been linked to cannabis, cocain and ecstacy or is Bangrak, in the north of the island now just the preferred home of British (ex) gangsters?

Has Walter Douglas, aka Terence Tomkins, aka, Willy Grant, and now known as ‘Bobby Brown’ drawn the line? If so, some people are asking, does he use a mirror when he draws it?

Cuddly bear or something else. You guess.

In 2009 the Daily Mirror rated hims as worth $20 million on their Pablo-Escobar-ometer.

Plus this site is soaring. We are gobsmacked by the figures and are waiting for them to settle down but readership appears to have doubled in a week since our new design, or perhaps link with Newsloop, or unless somebody is clicking on us all day and night!

Again our Alexa figures are going through the roof. The bounce rate is down to 35.30%. That means people, once they click into the site, are staying longer – on average 5:25 minutes. World ranking has come down and are we going up the list of favourites in Thailand.

Finally we have had four enquiries for the two vacant advertising slots shown on site. So, if you’re serious get your artwork to us quickly.

Hero Pulled Others From Wreckage – The Times

September 18, 2007 Andrew Comments Off on Hero Pulled Others From Wreckage – The Times