The American boss of ‘One Stop Legal Services’ in Pattaya today called for an adjournment of a libel case in which he is suing the owner of an internet forum for using a photo-shopped picture of him at a gay pride gathering wearing a leather pouch.

He told the court he had no briefs available to present his case.

The picture he claims degraded him and made him looked gay. He had not taken part in any gay parade and he presented birth certificates of eight of his Thai born children as if to demonstrate his heterosexuality.

The defendant another American * looked puzzled in the court room but he grinned as the judge told Noyes that if he could not find a lawyer by December 11th, the agreed date, the case would be dismissed. 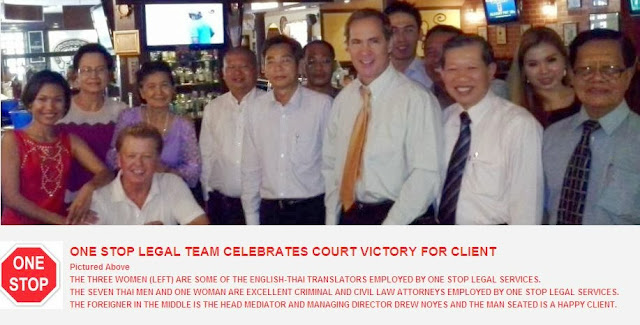 Noyes claims flies in the face of a new promotion he has put on the internet for ThailandLegalServices.com. But it is probably more accurate than the blurb above which does not state how many people in this picture are up on fraud charges. The satisfied customer looks uncannily  like a happy David Hanks {see below) after going through the full youth treatment at the Thonglor Clinic? 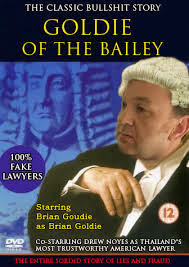 In a different room in Pattaya Provincial Court lawyers for Briton John Jepson were apparently surprised to discover that the defendant Brian Goudie, 47, a now infamous ‘fake barrister’,  had on September 3rd filed a request for an adjournment due to an appointment he had arranged for October 14th in Koh Samui court. The case had been adjourned to October 28th. Jepson is prosecuting him for fraud.

Meanwhile among the swaying palms outside Koh Samui Court Brian Goudie, formerly Goudie,  a former convict in Australia, admired the view and turned to anyone would listen to say how a case brought against British journalist Andrew Drummond would be short and sweet ‘as they do things quickly here’.

His sound legal judgment however seemed in doubt after he was told by the court that as Andrew Drummond had not received the summons he would need to serve it.

Drummond’s lawyer told the court he would accept the summons. 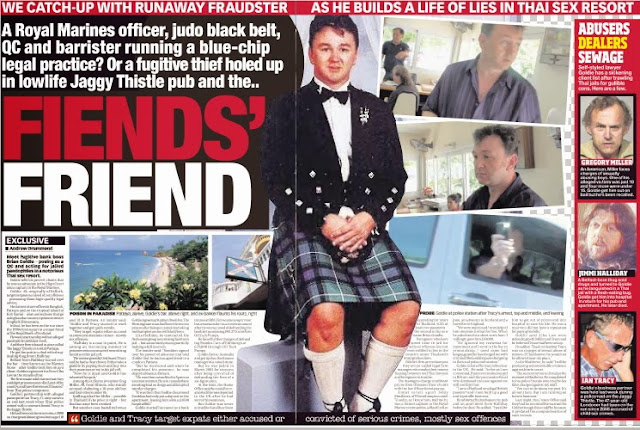 Goudie is suing Drummond for reproducing a story about him in the Scottish Sunday Mail which detailed his frauds. He is also suing claiming that Drummond falsely claimed he was ‘on the run’’.

At the court with him was David Hanks who is due in Pattaya Provincial Court tomorrow to sue Drummond for calling him a former pimp.  Drew Noyes is also due in the same case tomorrow to sue Drummond for using his name in connection with fraud, mia nois, oral sex, and the Buffalo Bar in Pattaya. The references were made in comments submitted to www.andrew-drummond.com.

COMMENT:  It seems that www.andrew-drummond.com  has become sort of dating agency for foreigners up to no good in Thailand whose exploits are recorded here.

What on earth was David Hanks former owner of Masquerades brothel in Keysborough, Victoria, doing on holiday with Brian Goudie in Koh Samui. Was Goudie trying to sell him a piece of Bang Kao Bay? 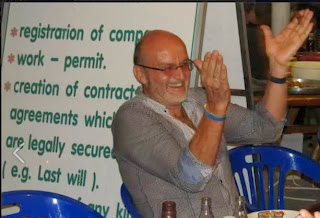 What’s more Goudie was introduced to the Thai wife of Norbert Verwayen, (right) the former Gerrman dentist, turned property #@%$&!  on Koh Samui who has something like 30 cases up against his former clients! She begged to see Goudie out of a feeling of common suffering.

AUSSIE JOURNO RETURNS TO THAILAND DEFIANTLY – TO TAKE ON NAVY

January 30, 2015 Andrew Comments Off on AUSSIE JOURNO RETURNS TO THAILAND DEFIANTLY – TO TAKE ON NAVY

May 11, 2015 Andrew Comments Off on O Sole Mio – Noyes Sad as Brit Drummond May Not Exist