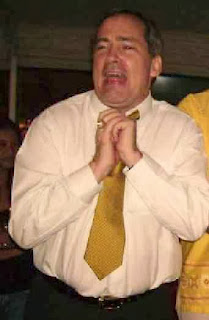 Controversial Pattaya ‘businessman’ Drew Noyes has sent a
message to whom he believes is the owner of the now defunct website forum
SubZeroSiam saying he will bring out the dirt on him unless he testifies against
British journalist Andrew Drummond.
Noyes, who has so far had five cases of criminal libel and
libel under the Computer Crimes Act dismissed, has said he would implicate the
man, also American, in ‘sadistic photos of white woman and young Thai girls.’
While records and basic internet checks appear to show the man in question is not the
owner of the SubZeroSiam website Mr. Noyes appears to have a fixation about him
and is suing the same man for criminal libel and libel under the Computer
Crimes Act.
In his action he complains that he has been libelled because a photograph of him wearing a leather jacket and pouch at a gay parade suggests he might be gay but in fact he is a real man with eight children by three different mothers in Thailand. 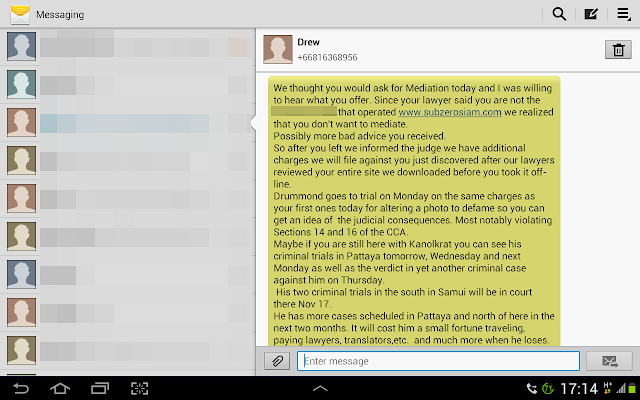 In fact while the pictures are a ‘spoof’ the accompanying text makes this quite clear.

Noyes, who describes himself as the foreign advisor to the Mayor of Pattaya, claims that after a hearing on October 14th (when Noyes turned up without lawyers) ‘We informed the judge that we will have additional charges we will file against you.’

He warned the American, an academic, that Drummond was going to trial on the same charge of ‘altering a photo to defame’.

“Maybe if you are still here with Kanolkrat (sic) you can see his criminal trials in Pattaya tomorrow, Wednesday and next Monday, as well as the verdict against him on Thursday  (Case was dismissed)

“His two criminal trials in the south in Samui will be in court there on November 17th. He has more cases scheduled in Pattaya and north of here in the next two months. It will cost him a small fortune travelling, paying lawyers, translators, etc. and much more when he loses.” 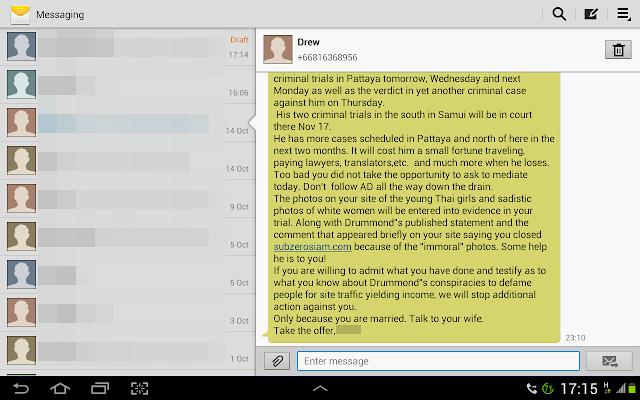 “If you are willing to admit what you have done and testify as to what you know about Drummond’s conspiracies to defame people for site traffic yielding income, we still stop additional action against you. Only because you are married. Talk to your wife. Take the offer.”

The witness has not been identified as he appears to be the subject of a blackmail threat. But the ‘Gay Parade’ picture he refers to is below. It is clearly photo-shopped and was not produced by either SubZerosSiam or the administrator of this site.

Readers of this site will of course know that Drew likes women, at least their bodies, abnormally so.

But he lied to the court when he said he gives them all houses and cars. A former girlfriend recently took him to Chonburi court (He claims he took her to seek joint custody of their daughter) and was awarded a child support payment. 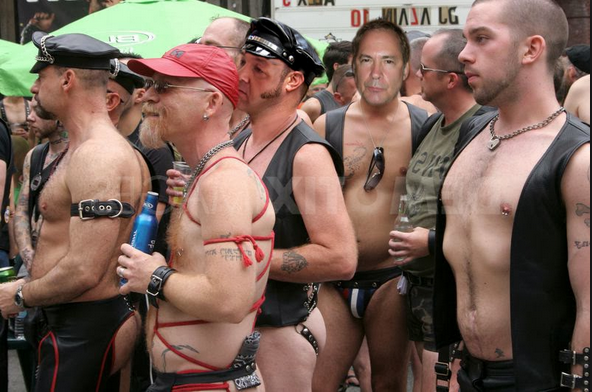 The victim has confirmed that Drew Noyes sent the sms message from a mobile number Drew Noyes has called from frequently. However it is not the number he has called this site on regularly.

But when we called the number we received an unmistakeable voice mail message from Drew Noyes. “At the tone leave your name and number and I will get back to you.”

‘You can always send a text message to this phone for a faster response’.

Andrew Drummond is seeking dismissal of the latest charge today.

COMMENT: This photo-shopped picture above was not photo-shopped by anyone on this site but sent to us by a reader as have the classic pictures of Brian Goudie as Goudie of the Bailey, and Goudie as a Royal Marine, Drew Noyes as a radio personality, etc

October 24, 2007 Andrew Comments Off on British Pedophile Had 100 Times More Pictures Than Mr.Swirly