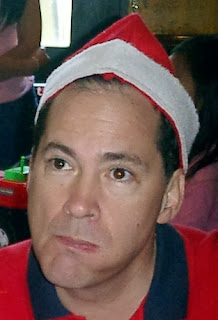 While Brian Goudie – the subject of the previous story has the temporary option to up and leave Thailand I can report that this option has now been removed from his co-conspirator Drew Walter Noyes here playing a less than cheerful Santa’s little helper.

Thai Immigration Police officials have been in touch to confirm that Mr. Noyes, who also claimed he was a lawyer, will not be allowed to pass any border passport controls until his current cases are cleared.

Currently the former publisher of the Pattaya Times Mr. Noyes is charged with his common-law, but not live-in, wife Wanrapa Boonsu with the attempted extortion of the Thonglor Clinic, Jomtien.

Noyes, who now runs One Stop Legal Services is also accused of  misappropriating 2.5 million baht from Dutchman Theo van der Schaaf  – a cash settlement van der Schaff had asked Noyes and his Pappa Co Ltd to give as part of a settlement with a former girlfriend.

But can the Thai judicial system actually put this man in jail? That is the question for 2014. One piece of good news however is that the Appeals system is working faster, something I’ll be looking at soon. 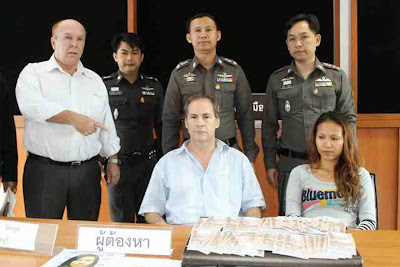 Regretfully the ‘Flying Sporran Awards’ have been shelved temporarily this year as the usual suspects Drew Noyes, Brian Goudie and David Hanks, are still placed first, second and third.

And just like having too much turkey I am mindful of readers having a surfeit of these colourful characters.