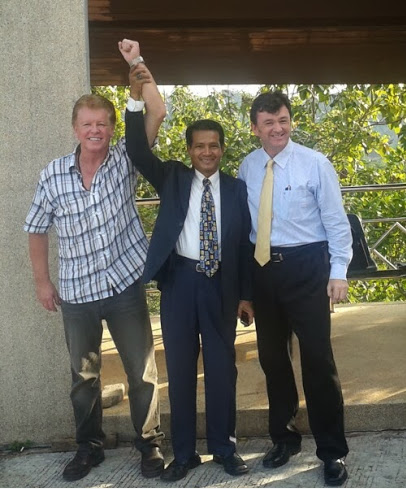 Having failed to offer up the former ‘Jaggie Thistle’ pub and guesthouse in Jomtien on Thailand’s eastern seaboard to buy himself off criminal charges for fraud, fake lawyer Brian Goudie has lost an entire month’s worth of entries from his internet Blogspot devoted to attacking this site.


This will not be an act of contrition, but it is puzzling because all stories by him are automatically saved and recorded so why bother.

He has however now been on the net from, he says, Suvarnabhumi airport, saying that his password was hacked.

It was done, says our pretend former Royal Marine officer, by someone in Surat Thani. Funnily enough I was at Suvarnabhumi airport too at 18.20 hours but I did not come from Surat. 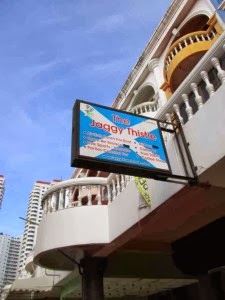 Lawyers for Barbara Fannelli Miller, whom he is accused of cheating out of 7.9 million baht do not want the ‘Jaggie Thistle’, which was acquired under suspicious circumstances from Ulster drugs trafficker Jimmy ‘Doc’ Halliday on his death bed. Its too hot a potato.

And in any case he cannot legally sell it – at least not without the permission of a Thai woman, whom he took obscene pictures of which mysteriously went up on the worldwide web.

So meanwhile he has been on Koh Samui seemingly to discuss strategy with his fellow Scot David Hanks, 66, who has taken libel actions against Andrew Drummond, on cases which are covered by court privilege in the UK which, if deemed accurate, absolutely cannot be the basis of a libel suit. Goudie also needs time for his shorn hair to grow after his spell in Nong Plalai Prison.

Meanwhile News UK, which replaced News International as owners of the Rupert Murdoch newspapers in Britain, is in negotiation with journalist Drummond and they have offered their assistance in various areas.

Hanks has complained mainly about an article in the SUN headed ‘OAP from Girvan is Mafia Enforcer’.  He has even announced that he is suing the SUN, a ‘fact’ which the SUN are of course inevitably unaware.

He further claims Drummond was not in court which is strange as Drummond as many people can witness he was.

The comments about Hanks were made in a court case in which Dr. Michael Goulet was a witness against Drew Walter Noyes and Wanrapa Boonsu, who are charged with the extortion of his clinic, the Thonglor Clinic in Jomtien.

Hanks, former licence holder of the ‘Masquerades Brothel’ in Keysborough, Melbourne, had checked in to the Thonglor Clinic and then approached him, he said, saying his boss ‘Drew Noyes’ wanted to meet him.

He said he had been in the sex trade and the Chinese mafia.
Goulet stated that after that meeting he felt anxious for his own safety.

What events happened subsequently between Goulet and Noyes are the subject of the extortion proceedings.

On March 10th Hanks will be cross examined about his conflicting statements to the Pattaya and Koh Samui courts in relation to Masqerades at the provincial court in Koh Samui.

He will also be challenged on statements he has made to the Samui Court.  Then on March 18th Hanks will have to give testimony for Drew Noyes in the extortion trial.

According to the now defunct Pattaya Times, formerly owned by Drew Noyes and Wanrapa Boonsu, he will claim that the money which Noyes attempted to extort, was to compensate for an operation at the clinic for Mr. Hanks which had gone wrong.

“Following a course of treatment allegedly recommended by Goulet, the businessman suffered nerve and skin damage, and could face the need for corrective facial surgery and skin grafts in the future. The businessman became suspicious when the Clinic allegedly refused to provide medical records indicating the name of the medicines used,” claimed the Pattaya Times report.

“Holiday snaps of Hanks however do not appear to show evidence of such tragic conditions”.

Originally the story was that the payment was for advertising in the  Pattaya Times.

September 21, 2016 Andrew Comments Off on NOYES HIT WITH IRON BAR AT HOME DEPOT