For foreigners in Thailand who have not quite grasped the language a poster to this site and master of the photo shopped picture ‘The Weapon’ has provided a review of Sondhi Limthongkul’s comments on his chat show last night on ASTV – which centred on the brutal murders of  Britons Hannah Witheridge and David Miller on Koh Tao. It makes interesting reading. 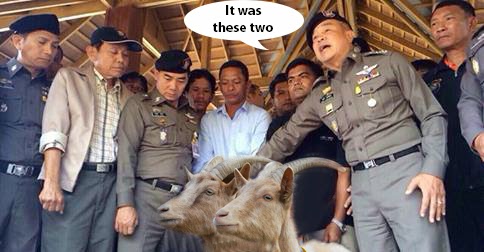 Sondhi starts off with a general talk about the new Government and the job Prayuth is doing. He says as a career soldier Prayuth loves country his and King but like previous Governments he is acting like a bureaucrat when he tries to overly protect the Kingdom’s reputation.

He said the new guys in power are like all politicians is being only concerned with their own survival and interests. He says Thailand’s international reputation will be ‘bankrupt’ if the tourist industry and the countries interests are put before justice.

He then says it is clear other countries suspect scapegoats have been arrested. He uses the word พิรุธ or phi-rut to describe this Koh Tao case. This word means suspect, dubious, dodgy etc. He uses this word to describe what everyone is saying about the case. 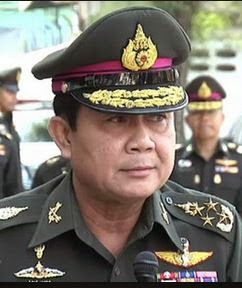 They get onto Koh Tao and the full moon parties with another guy saying everyone from blind Freddy to Dang the street dog knows these parties are where people go for drugs and sex. Sondhi then says world wide everybody knows this but if you ask the Thai police they just deny it.

He then says if drugs are illegal in Thailand how is this then acceptable? It must be stopped or the parties shut down if the Government is fair dinkum about the rule of law. He then says Prayuth himself should go and ask the people on Phuket and Samui etc about this. The people will tell him if he asks.

The whole talk he is intimating Prayuth is a bit naive about certain things and how the police abuse and profit from these things. (I think he is just watching his manners here, not wanting to be too critical of him)

They then move to a talk about social media and how the masses just don’t accept what has gone on in this case.

He says Scotland Yard should be invited into a joint investigation but Thailand doesn’t allow this.

He mentions the embassy was called in London for a ‘please explain’ and says that is not normal unless there is great concern about the case.

They then get onto the fact social media is accusing the son of a local influential figure but it is not only farangs who suspect him, Thais do as well as shown by what is going on on Facebook etc.

Sondhi then starts to fire up about the Thai police saying he has first hand experience about how crooked they can be, he mentions the Sherry Duncan case claiming the police paid fake witnesses to give bogus evidence.

The other guys chime in with the Saudi diamond case as another example.

He then goes on how this ‘top down’ system of the police must be reformed and a new way of doing things must be developed. He says he doesn’t want to talk too much about this as he will be accused of ‘not loving his country.’ He then says how the hell can you solve the countries problems if you cannot accept the truth? If you close your eyes and don’t accept what is true, how can you fix any problem?

They then say the DSI should be called immediately for a case involving a crime of national importance like this. Just like the FBI investigates federal crimes in America. Then there is a brief conversation about the politics of the police in Thailand and how there have been zero reform so far from the new Government.

They then talk about this and how even if somebody offers suggestions about reform they are ignored and things continue as before. When he taps the table Sondhi says all Thai Governments are only interested in two things, their own survival and looking good. He says wait and see if Prayuth and the rest of them don’t do exactly that.

Then follows a long political discussion that leads into them saying Pornthip is enemy of the police but that is actually good as it provides a system of checks and balances. They then say this is important to check the ‘chain of evidence’ from the so called offender right up to when it’s presented in court. The taking of DNA must be clean and protected through it’s journey through the system. They agree this just doesn’t happen in Thailand. The police take the DNA sample and send it to the lab but nobody knows what happens in between.

They finish by saying nobody should be scared to let somebody else check the DNA, don’t be afraid, just let the truth come out. He says tourism has dropped 19% and Thailand’s reputation is tied to tourism. They say it is fellows Asians who are scared to come to Thailand not Europeans.

Sondhi closes by saying crimes against farangs are nothing new but there hasn’t been such a serious case as the one in Koh Tao. In the past suspects have been caught but this case has left people totally suspicious.

Footnote:  There have been very serious cases of foreigners murdered. Protest has been more muted in the past because now everyone was internet savvy.