Thai Police have been accused of the cover up in the murder of another foreigner – this one shot three times with two guns in the north eastern Thai province of Chaiyaphum.

Local police have closed the file on the murder of Jawad Rasheed Khan,  who with his American-Thai wife was the owner of one of the biggest fish farms in the province – raising Tilapia fish for the giant CP conglomerate. 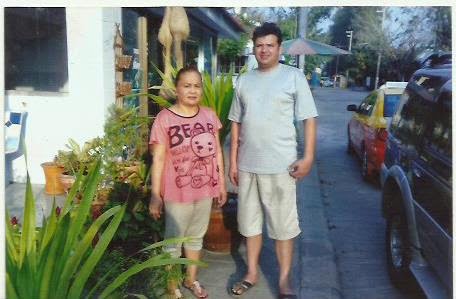 His wife Vanida Boongeon, 58, has made reports to the Department of Special Investigations through the Thai National Human Rights Commission. Both these organisations have had their powers limited by the suspension of the 2007 constitution.

She claims police covered up the murder and suspects her own family and a wealthy German national who, she claims sent her  sms’ within hours of the murder saying the deed had been done on her behalf  and warning her she was next if she did not pay up debts owed to him…including a debt for the murder itself. 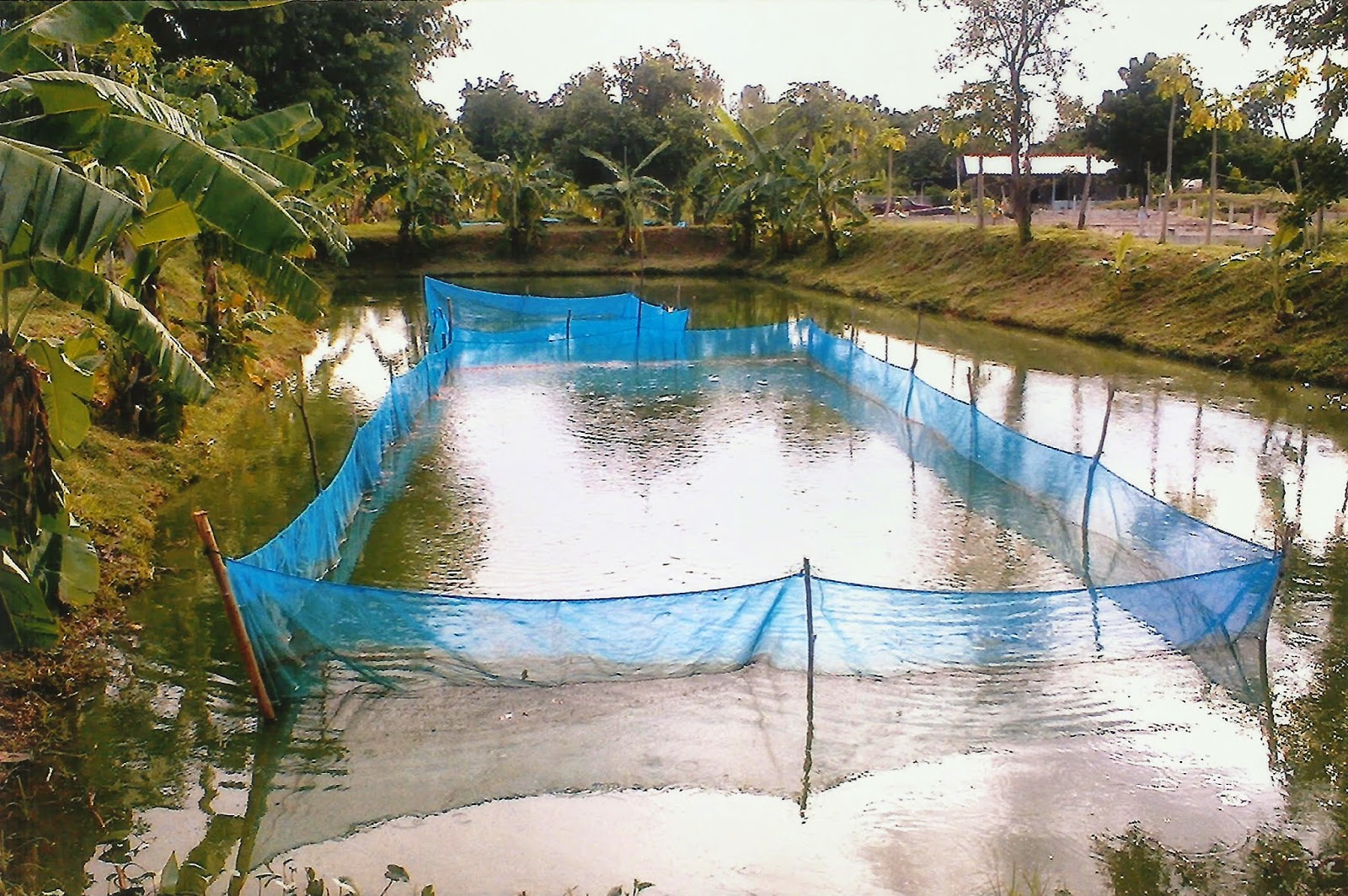 Chaiyaphum Police have long since released the two major suspects  a man named as Uwe Seliger , 50, from Leipzig, and Vanida’s elder brother Thongpoun Boongeon and have filed a report to the prosecutor reporting insufficient evidence.

But the dead man’s wife claims that there was plenty of evidence.  In the two bed-roomed bungalow at the time of the murder, were her sister, brother-in-law and elder brother.

In fact her brother sleeping next to her husband closest to the window from which the shot were fired.

Blood was found on her brother’s leg.  And there was blood DNA of another person at the crime scene which police have not identified. Vanida claims they have not attempted to look for a match.

But most controversial of all was the total lack of blood on the bed where her husband was allegedly shot.

Yet there was considerable blood outside and on the mosquito net in the house’s other bedroom, occupied by her sister in law and brother, says Vanida.

Vanida claims she has received death threats from her own family and Seliger since the murder and that Seliger has since met several times with her elder brother. 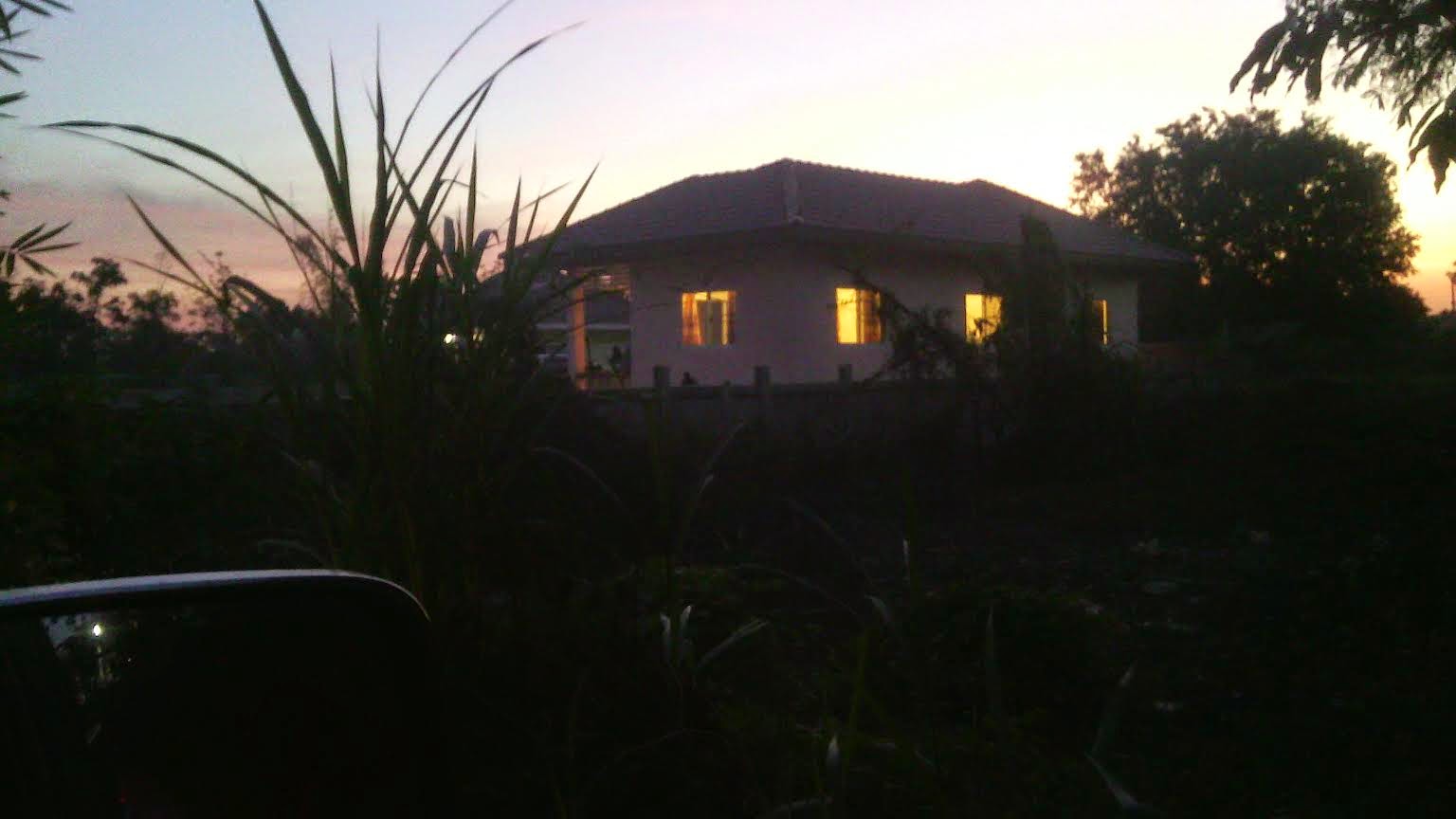 Vanida’s two American daughters are urging her return to Heltonville,  Ohio, in the United States for her own safety. But she says she wants the killers prosecuted and an end to the cover up.

Jawad Khan was gunned down sleeping at his fish farm in Ban Non Leum, just seven miles from Chaiyaphum city centre on November 20th 2013.  The police report says that according to witnesses he was shot by a gunman through the bedroom window.

Vanida claims Jawad was shot outside and his body dragged in to the bedroom afterwards.
But Thongpoun claimed he was asleep in the same bed and shots came through the window hitting Jawad in the head but missing him.

The murder happened early in the morning at around 4 am. Vanida said she received two calls from her family to say that Jawad had been shot dead then as she was travelling from Bangkok to Chaiyaphum she received the following sms, which she believes came from Seliger, who, she says, was brewing beer for the tourism market in Phuket, and having the ingredients imported tax free though the Buddhist Temple Wat Chaiyaphum.

It was an account for money owed to Uwe and was received at 05.41 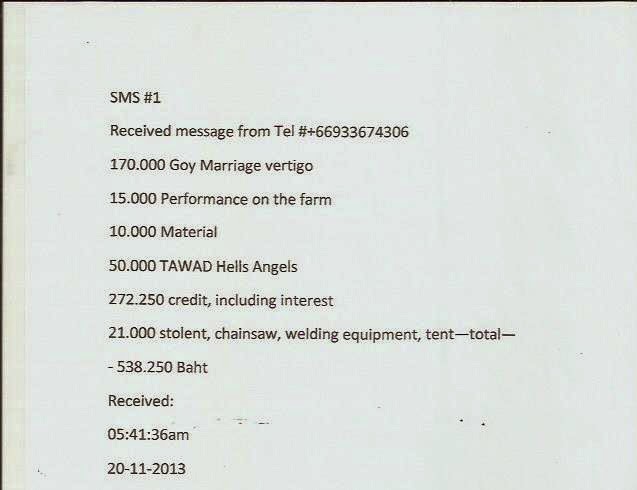 This says Vanida clearly identified Uwe Seliger as the sender.

The murder morning messages were sent from a pre-paid mobile phone but Vanida says she had received similar messages in the past from Seliger who held a massive grudge.

She had arranged a marriage to a young Chaiyaphum girl called Goy mentioned in the message for a dowry of 170,000 Thai baht (£3,415) and the girl, who was chaperoned right up to the wedding, did not stick around for the honeymoon infuriating Seliger.

The 50,000 baht categorsied as Tawad and ‘Hell’s Angels’ refers, says Vanida, Hell’s Angels that Uwe boasted of being friends with in Phuket. Was Uwe claiming they carried out the murder?

Because within a minute at 05.42, its alleged, came this second message. 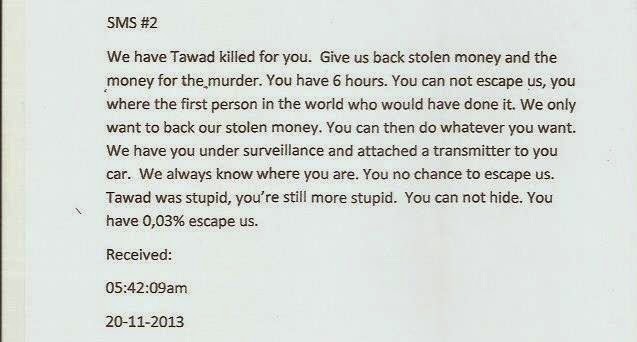 The message read: “We have killed Tawad for you. Give us back our stolen money and the money for the murder. You have six hours. You cannot escape us.  You are the first person in the world who would have done it.

The only person who referred to her husband  as Tawad was Uwe Seliger, claims says Vanida, and he had had several disputes at the fish farm with both with her husband and herself although they all had initially been friends.

“The letter was sent to demand cash and try and implicate me in my husband’s murder.  But I loved my husband and had no motive to kill him. The property was mine.  In fact my husband was 20 years younger than me. I had nothing to gain by his death.”

A third message arrived at 06.44 as she was still driving from Bangkok to Chaiyaphum.

“They all want your death, we gave you a chance. There is not a chance 2. We can always and you can take any time.  It your decision alone. When you sit in front of the mirror there is not back. Do not believe us? Then read it to arrive. You live no more than two months in Thailand. You have another 4.30 hours” 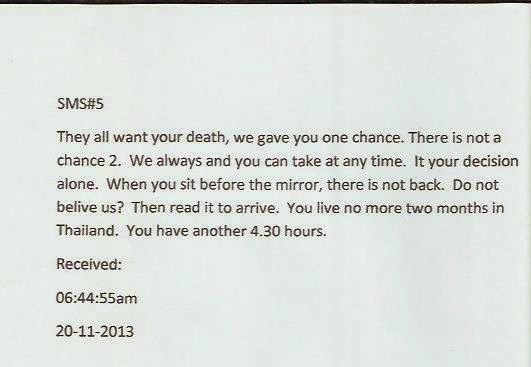 All the letters were written in poor English but English written more likely by a foreigner with some English education rather than a small farming family in Chaiyaphum.

Nevertheless she says she does not believe that Seliger was personally involved in the murder and that the answers must lie with her own family and local gunmen. All suspects have denied the accusations.

It should be stated that although these message were definitely received it is a police matter to verify where the messages came from.

Vanida had arrived at the crime scene shortly after 10 am on the day of the murder and found multiple television crews trampling over the scene.  A later post mortem showed that Jawad has died from gunshots to his which punctured his liver and lungs.

“I am afraid I have to look at my own family for what happened to Jawad,” she says, “I do not know why. I sent them money for years and to buy the land they are on. Was is not enough?

“Apart from Uwe it has been my family I have been getting threats from.”

In May 2014 after a letter from Uwe, a man came to the fish farm with gun. She subsequently filed a police report.  And threats have continued up until the present day, she says.

Police Colonel Sutipat at Chaiyaphum, she says, told her that if she had new evidence she could bring her own case for murder.  If Vanida is telling the truth that would certainly incur more threats and possible action.

As a result of her complaints the Royal Thai Police have sent a request to Police Region 3 to make further enquiries in the case.

The Attorney General’s office have said the case is not closed and an enquiry is pending.

But lawyers have told Vanida that the only way to get results is to take the matter to court herself with a private prosecution…a risky business perhaps.

Calls to Uwe Selinger were not answered. But his comments on the sms messages would be welcome.

Although we have seen the complete file sent by Chaiyaphum Police to the public prosecutor, all claims should be treated with some caution until they have been able to provide a complete answer.

Vanida was a young 13-year-old girl working on the United States Air Force base in Nakhon Phatom in Northern Thailand during the Vietnam War and secret war in Laos when she met a young 21-year-old American mechanic called George.

They later married and went to live in the United States with her parents and U.S, approval, where they had two daughters.

They however later divorced and she returned to Thailand. She worked for Tim Young, the American father of Thai pop star Tata Young and later started her own travel agency.  She met Jawad in Pakistan while on business there.

January 5, 2016 Andrew Comments Off on “WE WILL CATCH THE CYBER MEN” say Thai Police under attack for Koh Tao murder investigation

October 27, 2013 Andrew Comments Off on THAI BRIDE MISSING IN SCOTLAND