Phuketwan journalists Alan Morison and Chutima Sidasathian will be told of their fate tomorrow when the Phuket court hands down judgment on the criminal libel and computer crime cases brought against them by the Royal Thai Navy. 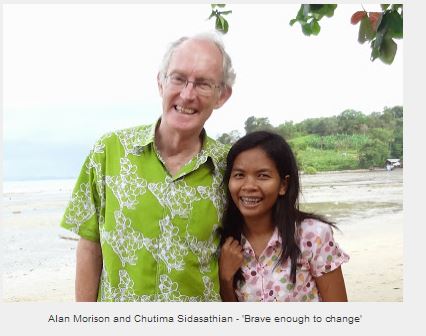 The Navy has taken exception to the fact that it has acted anything but honourably in the trafficking and mistreatment of Rohingyas. If the Royal Thai Navy wins it will be their first naval victory.

The following is a statement issued by West Australian lawyer Ian Yarwood.

As the world is still digesting the sham decision of an Egyptian court to sentence three Al Jazeera journalists to three years in jail, two more journalists await their fate in Phuket, Thailand.

Unfortunately, the outcome for Australian expat Alan Morison and his Thai colleague, Chutima Sidasathian could be worse, far worse.

Thai jails would make Egyptian jails seem like Heaven and they risk spending the next 7 years in the Hell of Phuket prison.  It is an experience that 67 year Morison, a former senior editor of the Melbourne newspaper The Age, says he would not survive.

At 9.00 am on Tuesday, 1 September 2015 the Phuket Provincial Court is due to hand down its judgment in a highly controversial case where the mighty Royal Thai Navy is suing the two isolated reporters for criminal defamation and a breach of the (Thai) Computer Crimes Act.

This follows a 3 day trial from 14 – 16 July 2015 in which the prosecutor announced to the court at the beginning of the second day that she would not take any further part and would not cross-examine the defence witnesses.

“This sort of thing, the early withdrawal of the prosecutor, simply does not happen in Australia but according to the Thai lawyers who attended it is not uncommon in Thailand and can mean one of two things: either that a conviction is a foregone conclusion; or that the prosecution case is hopeless.” said Perth lawyer, Ian Yarwood who observed the entire trial.

The journalists’ alleged crime?  On 17 July 2013, the accused had the audacity to reprint a paragraph from a Reuters story that was one of a series on the trafficking of the Rohingya boatpeople.  Reuters went on to win a Pulitzer Prize.  In contrast, the Phuket based journalists and their small online website Phuketwan.com were hit with the criminal charges in December 2013.

“The relevant paragraph was quite vague.” said Mr Yarwood.

”The Thai naval forces usually earn about 2000 baht per Rohingya for spotting a boat or turning a blind eye, said the smuggler, who works in the southern Thai region of Phang Nga [north of Phuket] and deals directly with the navy and police.

“The paragraph did not name or identify the Royal Thai Navy and in fact the Reuters article and the Phuketwan article also referred to ‘Thai naval security forces’, ‘militia commanders’ and ‘Police’ as well as the Royal Thai Navy” explained Mr Yarwood.

“In addition, Reuters went on to use other terms in a later story of 5 December 2013 in which it referred to (Thai) ‘Marine Police’” said Mr Yarwood.

“An uncontested fact in the trial was that Thailand has many ‘naval forces’ (plural) that have naval vessels.” Mr Yarwood added.

“Nevertheless, an unknown translator in the Royal Thai Navy erroneously translated ‘Thai naval forces’ as the proper noun ‘Royal Thai Navy.’  Remarkably, the Navy and prosecutor failed to have an expert translator attend court.  The prosecutor merely relied up the assertions of Royal Thai Navy Captain Pallop Komalodaka, even though the captain conceded in court that he could not speak English properly.” said Mr Yarwood.

“The final of four prosecution witness was Thai Police Lt Colonel Sanich Nukong, who was clearly very embarrassed during cross-examination.

|He conceded that he could not understand English and simply accepted the Navy’s translation even though the journalists had explained to him during the investigation that there was an obvious error in translation.  The police officer further conceded that he had not obtained an independent expert translation of the term ‘Thai naval forces’.  He essentially acted as a rubber stamp and laid the charges.” said Mr Yarwood.

“At the end of the prosecution evidence a defence barrister in Australia would probably have made a submission of ‘no case to answer’ but that did not happen in the Phuket court.” said Mr Yarwood.

“On the final two days of the trial the defence witnesses gave their evidence which was uncontested and therefore should be accepted by the court.” said Mr Yarwood.

“Throughout the trial the gallery was packed with lawyers, journalists, UNESCO staff, an ICJ representative, an IFJ independent trial observer, staff of various NGOs, human rights defenders, three Australian Embassy staff and other assorted supporters and friends of the accused.” said Mr Yarwood “whereas the Navy had very few supporters or observers in court.”

“Unfortunately, contrary to some assertions by the Navy and contained in some reports, the journalists could not have simply apologised to make all the charges disappear.  The Navy could have dropped the criminal defamation charges (which attract a maximum jail sentence of two years) upon receiving an apology but once the Computer Crimes Act charges were laid they could not be dropped by the Navy.  An apology (which would have been false) could have simply triggered a conviction of the more serious CCA charges which carries a maximum penalty of 5 years in jail.”

“The trial was controversial for multiple reasons.”

“Firstly, it took place only a few short months after the discovery of several mass graves of Rohingya refugees on each side of the Thai/Malaysia border.”

“Secondly, it is doubtful that a branch of the armed services is able to sue for defamation even in Thailand.”

“Thirdly, the relevant paragraph belonged to Reuters which is a reliable source of accurate news.  Phuketwan had merely quoted a famous news service.”

“Fourth, s 14(1) the (Thai) Computer Crimes Act was drafted with a view to cover ‘damage’ by computer viruses and hacking but not ‘damage’ to reputation.  Unfortunately, eager prosecutors have submitted incorrectly that s 14(1) had an excessively broad application.”

“Fifth, the original author of the paragraph Reuters was not charged and the Navy captain gave no explanation in court as to why only the smaller target was pursued.”

“The journalists should be acquitted.  They should never have been charged but they and their supporters have an anxious wait until Tuesday morning.  If they are convicted it will be disastrous for them and for Thailand.” said Mr Yarwood.

August 23, 2015 Andrew Comments Off on D-DAY IN THAILAND FOR BRITON ANDY HALL