An article in the Myanmar Times today by R J Vogt about the Karen minority celebrating VJ Day in Rangoon (Yangon) last month and an accompanying picture certainly brings back a few memories.


The story centres around of Sally Mclean and her organization ‘Help for Forgotten Allies’  or H4FA which of course the Burmese Karen, or Kayin, certainly were.

The Karen were loyal to the British against the Japanese during the Second World War and fought with Force 136 officers behind enemy lines.

What went on is the stuff of legends but Britain broke its promises to the ethnic minorities or Burma, and what promises it did not break Burma’s post war military leader Ne Win did.

There then followed some seventy years of insurgency which has still not ended to this day – though many of the rebel factions have come to terms with the Burmese military led government..
Sally Mclean got to Buma in 1999 where she met a Karen veteran called Saw Lawshoo.

According to the Myanmar Times article.

87-year old Saw Yoshoo easily rattled off his former rank, number and the name of his commanding officer, someone he had not seen or heard from in 50 years.

Despite living in severe poverty, he requested only one thing of McLean: that she return to Great Britain and “inform his officers” of his whereabouts.

During the last seventeen years, McLean has worked to inform the world of Saw Yoshoo and hundreds more like him – WWII veterans who served the Allies honourably only to be forgotten after Burma’s independence.

Her non-profit organisation, Help 4 Forgotten Allies (H4FA), provides grants and support to veterans of the Allied armed forces still alive in Myanmar. In some cases, the organisation also supports the widows and surviving children of the former soldiers.

I got into Burma in 1986/7 and into Karen State (Kawthoolei), illegally of course, and met up with Major Aaron Po-yin formerly of the (British) Burma Navy and who later fought with Force 136 and got the Distinguished  Service Medal for saving his officers from a Japanese ambush.

I went back to the UK contacted the Ministry of Defence, gave them details and they gave me his medal which he took back to the Karen headquarters at Manerplaw near the Thai border. ( If I tried that today under the new tick box civil service I am sure it would not have happened.)

The old Major, who came out with 40s English expressions like ‘Crikey’ and remembered officers in his Navy days receiving Christmas hampers from Fortnum and Masons, was invested with his medal in the jungle (Picture at top).

Shortly afterwards I returned to film with the Karen with a TV crew to make the doc ‘Burma’s Forgotten War’ which I wrote for BBC Everyman. We based ourselves in Manerplaw – but made weekend trips to Mae Sot for R’n R.

At the time we were able to travel extensively in rebel held area in Karen State by 4×4 and had a couple of skirmishes with the Burmese Army; being mortared and shot at.

In one place the Karen faced the Burmese along fixed front lines only 90 yards apart. There were not any wild ‘over the top’ charges thank god.

However after sitting there for a few hours brewing tea etc with cameras set up, I have to admit the question was asked ‘Well, does anybody actually shoot at each other around here’?’ – answer: ‘Well we do not want to waste ammunition’.

After some deliberation the Karen let off a few rounds. The stuff that came back at us from the Burmese lines answered out question more succinctly. 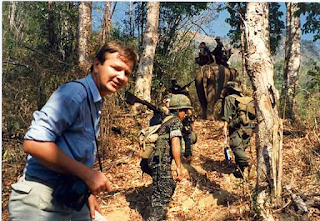 The funniest part of the film came when the producer appeared to be wanting to create the ‘Elephant Patrol’ from the ‘Jungle Book’.

The Karen assembled some 20 elephants to make an armed elephant patrol which we followed going down a jungle stream.

Has anybody tried to get 20 elephants in a single frame in the jungle let alone three? 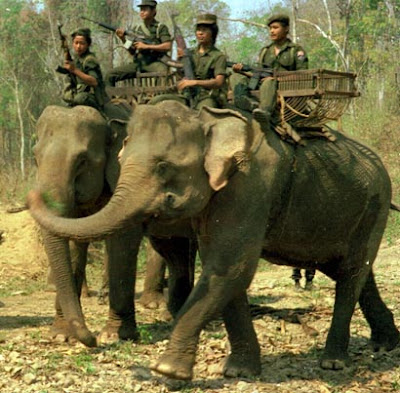 Anyway I made good friends in the Karen – friendships which were last for years. As readers of this site will know – my Nanny – May – was a Karen and a registered nurse – and we all miss her terribly.

So if anybody wants to help them they can find the H4FA here.