An arrest warrant has been issued for Brian Goudie, the convicted criminal, who set up home in Thailand posing as a barrister and former officer in the Royal Marines, to make money out of tourists and expats. 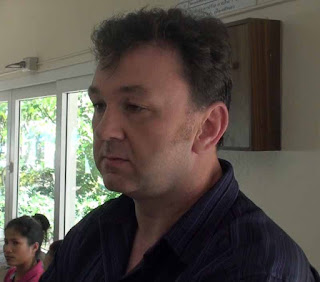 The latest warrant was in connection with a criminal fraud case brought against him and his pseudo legal company Alba Laws, by two Britons and a German national, who claim they were defrauded over a housing deal, and having won their case Goudie pocketed their court award.

Later this month on September 22nd Goudie is due to face judgment on a case brought by American Barbara Fanelli Miller, on a charge of posing as a barrister and former Royal Marines officer to defraud her out of 7.8 million Thai baht – although a closer figure say lawyers is US$300,000.

He accepted a case promising to get bail for her son who had a heart condition and had been arrested on child abuse charges. However her son died in custody of heart failure while awaiting trial.

Also facing fraud charges brought by the Brits, German, Barbara Miller is Sukanya Worakham, his former Thai assistant at Alba Laws but no warrant was issued for her arrest. She appointed a lawyer to ask for an adjournment saying she would turn up at the next hearing.

On a previous occasion she had paid Goudie’s bail. It appears they have now parted company in a joint defence, a sensible move by Sukanya.

If Goudie turns up for the verdict on the Miller case and has not surrendered beforehand  he will be arrested on his fraud case with the Brits and German – which will resume on October 19th.

Goudie’s colleague, Drew Walter Noyes, 60, former publisher of the Pattaya Times newspaper, who like Goudie has tried to have this website closed, faces judgment in his extortion case on October 22nd.

Currently Goudie claims to be running ‘The Key’ pub and guest house in the Jomtien Complex, Pattaya which is advertised on Facebook as being open Friday to Sunday. 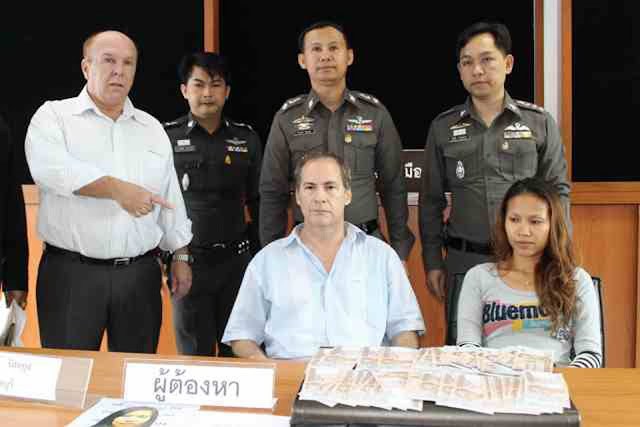 Noyes is still in the United States. He departed on August 4th and was granted an extension of leave until October 14 to ‘settle his children in school’.  A week before his departure his eldest daughter ran away to Bangkok where she is staying with friends.

Arrests warrants have been issued before for Goudie, but he has previously surrendered to them and paid bail. He did however spend a weekend in Nong Plalai prison.

Reference is made in the headline to the torn net of Thai justice. The fact is that Goudie, and Noyes, have been able to make a mockery out of the justice system – because the justice system appears to have been set up with that in store,
Noyes, who also claimed to be a lawyer, had publicly stated repeatedly: ‘I am never never going to jail.’ That may well be now for the FBI.
He has gone to the United States leaving his eldest daughter behind at a very vulnerable age. He has also left all his children by Wanrapa Boonsu. The evidence in his extortion case is overwhelming.
It was a police sting after complaints from the victims. Noyes has run before. He ran from the United States where he had spent jail time for larceny and had been exposed across two pages of the Morning Star newspaper in Wilmington, Carolina – then he re-invented himself in Pattaya as ‘high society’ and even dined with the judges of the court. 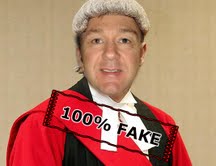 Goudie has also run before. He ran from an arrest warrant in Scotland for defrauding the Royal Bank of Scotland and stayed away until such time as it timed out; Then he committed more crimes in Australia while conducting long bar-room barrister cases with the Australian Appeals Tribunal insisting on his right to stay in the country.  When time was running out and he was due a judgment for deportation he simply left.
Do #DrewNoyes and #BrianGoudie think they can bluff through way through the cases over the next two months? Lets wait and see. They can only escape though if there is one of those ‘irregularities’ for which Thailand is famous.

NOT THIS YEAR DREW! AMERICAN ‘LAWYER’ FAILS TO TURN UP TO TESTIFY

June 9, 2014 Andrew Comments Off on NOT THIS YEAR DREW! AMERICAN ‘LAWYER’ FAILS TO TURN UP TO TESTIFY

GETTING MARRIED IN THAILAND? HERE’S A NEW SERVICE. MASSIVE SAVINGS

May 2, 2016 Andrew Comments Off on GETTING MARRIED IN THAILAND? HERE’S A NEW SERVICE. MASSIVE SAVINGS