A fake Scottish lawyer, who created an internet website to discredit a British journalist who exposed his fraudulent activities has been refused bail for the second time to appeal a 3 year jail sentence for defrauding a 78-year-old an American woman.


Brian Goudie, born Brian Gerard James Goldie, in Falkirk, Scotland, was led back in chains to Nong Plalai jail on Thailand, yesterday (Monday) but not before, another man also featured on his site and accused of being a paedophile, announced that he would be suing Goudie  over his CasewatchAsia Google site.

Both Goudie and American Drew Walter Noyes,  60, had used the site to discredit Andrew Drummond, author of this website,  accusing Drummond being a fraud, cheat,  blackmailing ‘respectable businessmen’ and even of being a Nazi, after Drummond exposed many of their fraud scams in Thailand. 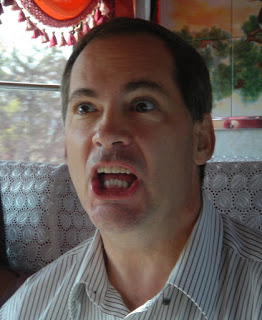 #DrewNoyes (right) former publisher of the  Pattaya Times has already been sentenced to two years jail for extortion along with his common law wife Wanrapa Boonsu and is currently appealing.

His appeal will be heard on October 22nd – if he returns from the United States.

In order to give his Casewatch site some credibility #BrianGoudie also copied and re-wrote several high profile criminal cases currently in the news in Thailand. One was a report copied from another internet source of the arrest of the man in question for child sexual abuse.

In fact the man had been falsely arrested and is takin legal action both in Thailand and the United States for the tremendous damage to his name and employment prospects – and most newspapers if not all have now removed the story.

But at Pattaya Court when Goudie was asked by the vindicated man to take down his story, Goudie refused,” the falsely accused man reported.

“He said they were Andrew Drummond’s and not his and he had nothing to do with it.  He then said he would keep them up and I would have to sue him to take them down so that is exactly what I will do.


“Funny how he could say that if they were not his blogs!  Drew Noyes also said in a reply email he had nothing to do with these blogs!”

He had previously been jailed for six years in Australia for theft and after leaving Scotland in the 90s a warrant (since expired) was issued for his arrest in connection with a fraud on the Royal Bank of Scotland).

Meanwhile callers to the Key Bar in Pattaya are told by his girlfriend Oui Jirapun: ‘Brian not here. He is Koh Samui.’

Its not that she does not know. She was with him in the cells below court on Monday.