Convicted fraudster Drew Noyes who fled Thailand with some of his children while on bail has announced yet again that he will return – this time he says ‘to claim what’s rightfully mine’. 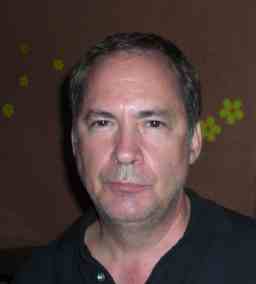 On his Facebook site which he heads ‘My life is dedicated to my children’ the former publisher of the Pattaya Times newspaper smiles cheerfully as he cooks hamburgers for his kids and also advertises his bogus One Stop Legal Services business which he ran with his common law wife Wanrapa Boonsu.

Boonsu, known as Kung, was convicted with him of embezzlement and extortion and like Noyes jailed for two years. Both are on bail appealing.

Unfortunately for Noyes, the One-Stop business in Pattaya is not his anymore.

…….Nor for that matter is his wife in this truth is stranger than fiction story.

Kung has taken up home with a former victim of Drew Noyes who claimed Noyes swindled him out of US$250,000.  The pair have been on holiday to Kanchanaburi, and are reported to be madly in love.

One could be forgiven for thinking that Noyes’ former victim has a wry smile on his face. But where is this going?

Noyes has been furiously texting threats to him from North Carolina where he was first exposed as a fraud by the Wilmington Morning Star, now known simply as ‘The Star’ in Wilmington, NC.
The American who went to Jefferson High School, Jefferson City, TN, with Noyes  however is unperturbed and looking forward to a face to face meeting. He has told friends that he will not stop until Noyes is groveling in the dirt.

He was ripped off by Noyes being charged five times the value of an apartment at Keha Condo in Thepprasit Road, Jomtien, which was built by Thailand’s National Housing Authority for disadvantaged Thais.  (In what other country can you witness the authorities greedily lining their pockets by selling housing meant for the poor to rich tourists?) 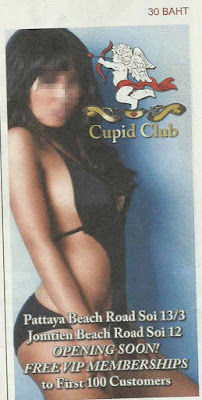 Noyes had also cheated him in the purchase what was agreed would be a small hotel in Pattayaland but which turned out to be ‘Cupid’s’ a hostess club which never opened and cash also went into thge Athena Gentle’s Man Club (sic) club in Jomtien which remains unsold.  This planned ‘knocking shop’ failed to open its doors to one customer and anyone interested should know that the building is in hock to the bank.

Kung, an active partner in Noyes’ scams in Pattaya, is now playing the victim and has a new shoulder to cry on. The American a former weapons instructor and US Naval policeman believes she is an innocent party who fell under Noyes’ influence. He will support her, he says, even if/when she goes to jail. She is a private person, he says.

Critics of Kung says she was not so private when she offered to hold foreigners’ houses in her name, to stop their Thai wives getting them, and when she aided him in his other scams. Its unlikely they will nor pursue her further. 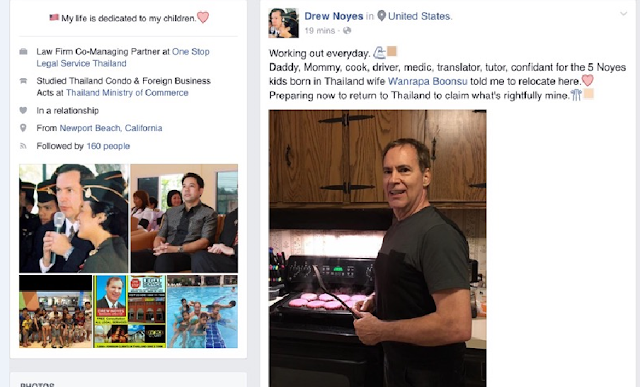 The American victims says he will pursue Noyes in the United States.

Although she was convicted with Noyes of attempting to extort Dr Michel Goulet of the Thonglor Clinic out of 7.8 million Thai baht a legal assistant has reported to this site that particular incriminating evidence in which police witnessed a phone call from Wanrapa ordering Goulet to pay up quickly….or else, appears not to be in the court file.

This could of course have merely been incompetence by the prosecutor, who curiously unlike other regions of Thailand, has not been rotated for years.

Scott Gold, formerly of the Morning Star now with the LA Times, would chuckle at the picture of Noyes cooking burgers. In his exposé of Noyes in April 1995 under the headline ‘Trouble Follows Developer’ apart from Noyes’s share scams, property scams, and sexual harassment, he discovered that Noyes’s CV was a ‘myriad of lies’.

Noyes had boasted that he was one of the directors of the World Fair in Knoxville. In fact Noyes was there to help a friend out with a rib stand.

On his Facebook page he claims he studied the Foreign Business Act and Property at the Thai Ministry of Commerce. You can take that with a couple of dollops of barbecue sauce.

DECLARATION: Wanrapa Boonsu and Drew Noyes sued the author in two cases brought for criminal libel and computer crime act libel for publishing the picture below which shows her and Noyes under the caption ‘Going to Jail’ and Niels Colov publisher of the Pattaya People under the caption ‘Been to Jail’. Colov, head of Pattaya Police Foreign Volunteer Assistants served time in Copenhagen for a number of offences including pimping and beating up as prostitute. BOTH CASES WERE THROWN OUT.