The Thai Government has now admitted what we have known all along. It is going to strictly control the foreign media in Thailand and those journalists guilty of ‘inaccurate reporting’ will have their visas revoked and possibly much more.

Only a smattering of ‘staff’ journalists are based in Bangkok and their brief is not to cover Thailand but south East Asia.

Thailand is in a relative backwater on the world stage – known in the main for cheap sex, food and drink, hospitality, the Thai smile, corruption, property and share fraud, and the occasional dismemberment, murder, or rape of a tourist. 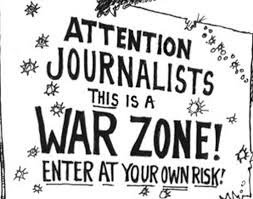 Freelance journalists are often staff journalists who have left for two reasons. They want to control the news they do and provide it to whom they want, and for many the money was better.

In fact the BBC journalists are now on yearly contracts – and to a great extent their money can also depend on how much they actually produce. Many if not most of the great names in journalism are in fact freelance and many command their own high fees.

Bangkok has of course been a special case. There will be many who have settled in Thailand because they like the climate and life-style (Many journalists and diplomats have retired in Thailand.)

There are also journalists accredited to some pretty obscure publications.

If you see a South East Asian story say published in a British newspaper under the byline of a London ‘staffer’  – the chances are there is a freelance involved there somehow – if not a wire service.

But wire services as a general rule will not do any ‘private digging’ for individual publications or broadcasters. 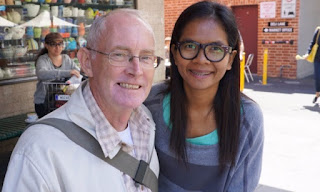 The scandal of the Rohingyas is a classic case in question.  The prime agents of this story were Alan Morison, a former CCN editor, and Chutima Sidasathian, who working from Phuket were the first to expose the Rohingya trafficking story.  They provided the material and contacts to Reuters – who claimed the Pulitzer.

What did Alan and Chutima get? They were effectively hounded out of Thailand by a Computer Crime libel action. They won their case – but as in all case the action was debilitating.

In fact a large proportion of the exposé type stories have been if not totally written by freelances, have been initiated by them for the best publications in the world.

So it’s not surprising that after weeks of denials the government has now revealed the truth in the Khao Sod.

“Many foreign correspondents who live in Thailand are not proper reporters. They don’t have agencies,” Don Pramudwinai told reporters at Government House on Tuesday. “Sometimes, they report inaccurate information that causes damage to Thailand.”


He added: ““I believe that these restrictions won’t make foreigners think we restrict foreign media rights.”

It sounds like Don has had a long lunch.  Foreigners already know that the Thai government is restricting the press.

Had I still been in Thailand I would have reached the top of the military’s banned list a long time ago.

www.andrew-drummond.com has been banned in Thailand but the government refuses to say why.

It is banned in fact because a convicted extortionist asked for the ban in the light of a Computer Crime Act case in which I was found guilty of allowing a poster on the site describe David John Hanks as a pimp.

The court, in Pattaya of course, was shown the ASIC documents showing he was the owner of a brothel in Melbourne, at which point he even admitted it – saying but the prostitutes were very well looked after!

In fact I left Thailand because some of the villains I was exposing were in league with both police and army,l and it was no longer safe for me to stay there with my children.

Had I remained, and those threats not kickied in, I am sure I would have been exhausted by now with Computer Crime Act cases brought against me by convicted foreign criminals.

I am being sued by criminals in both the Pattaya and Samui courts – criminals who have been allowed to remain free while appealing additional convictions in Thailand for fraud, embezzlement and extortion. 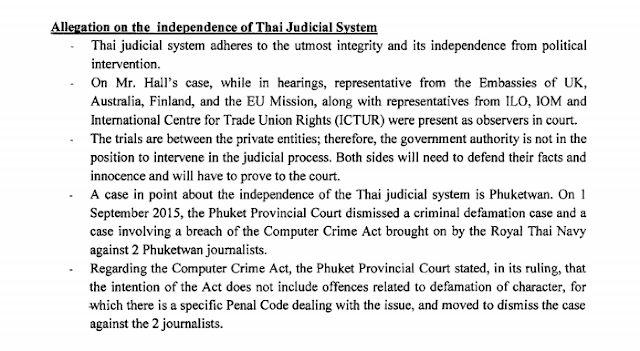 All this despite the statement (above) which I published yesterday quoting the judge in the Andy Hall case by Thailand’s Ambassador to the UN in Geneva that defamation cases should not be brought under the Computer Crime Act. 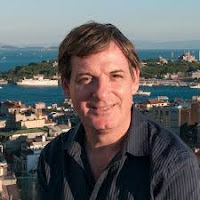 And proceedings have since been served against Jonathan Head, BBC South East Asia Correspondent, and Chairman of the FCCT Professional and Ethics Committee.

Though long since gone I still get many requests for help from foreign publications because I worked the country and south East Asia for over 25 years.

The fact is that the Thai government is running scared. It’s not merely the resident media who are affected.  Quite a few documentary makers have recently been refused access to film.  This is not because their projects are controversial. In fact they seemed very positive.

But everybody is scared to give permission. 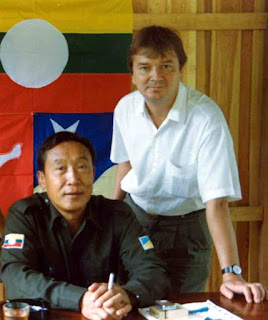 It is almost impossible to make a film in Thailand without realizing that it is not quite the country of tourist brochures.

When I first arrived I began filming with Mong Tai Army of drug warlord Khun Sa in the Shan States of Burma.  Thailand and the United States had declared him the world’s most wanted man.

It did not appear to be  so.  We filmed the Thai military building a road to his camp.  Not to arrest him…but to do business!

The latest decree will not of course stop ‘bad’ stories getting out, whether it be about politics or the demise of tourists in one way or another. The Thai government will have to close down social media on which messages to the world go out instantly.  They have tried. It won’t work.

Footnote: The author is a former Fleet Street staffer and co-founder of the Observer Film Company in London.


He worked as a freelance journalist in Thailand for 25 years accredited to The Times and London Evening Standard.