The CTTV video of a family from Wales being viciously beaten in Thailand which went around the world yesterday is unfortunately not an incident which is new to Thailand although the video was still shocking.


The story made in print and TV media not only saturation coverage in Britain but also in the US and Australia and Europe in website publications from Newsweek to the Malta Times.

In Thailand the English language press – Thailand’s window to the world – seemed rather hesitant.

It finally made the Nation newspaper’s website today (Friday 29th) at 1am.  The Bangkok Post ran the story yesterday copied  in the ‘Learning Thai’ section.

The newspaper finally fully caught up leading today with a picture of one of the assailants, the youngest aged 20, publicly apologising to the Thai people and the family but not necessarily in that order but we still get no idea of who these attackers are.

The young Thai apologises to the Thai people and is then told by the policeman to apologise to the victims too. 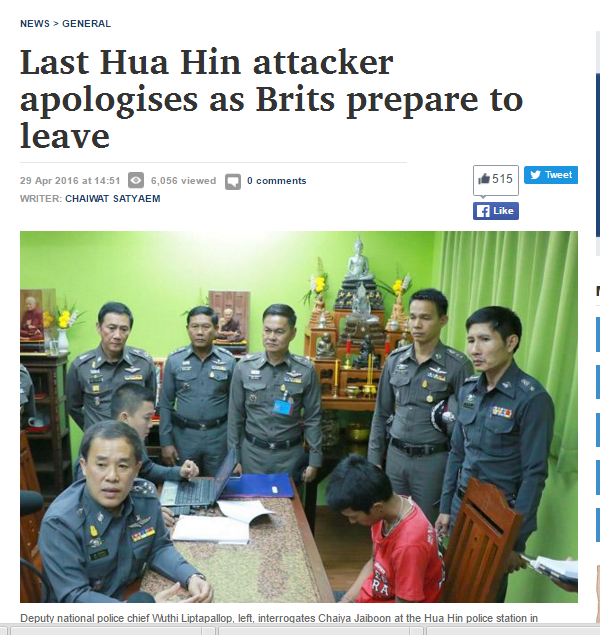 While in the social media in forums in Thailand as usual there was a mixed reaction.  But in general those horrified by the incident outnumbered by others who seem to think the foreigners started it all – because they must have done something to upset the Thais.

Some were as usual quite vociferous suggesting as usual that the complainers ‘go home’ thus proving the adage ‘You can fool some of the people all of the time.’

In fact the real issue is not who is to blame. In many of the attacks the tourist may indeed do something wrong, particularly if they are drunk. They certainly misjudge situations.

What they do not realise is the level of wanton violence they will unleash and how many people will join in.

In fact the British family involved Lewis and Rose Owen, aged 68 and 65, and their son, also Lewis, aged 43 loved Thailand and came almost every year. The son now says none of them will return to Thailand.

They have met one of its darker sides. It’s a side one can miss for years as a tourist. But it’s always there and has probably been exacerbated by continued attempts by the government to push and push tourism to such an extent that it is destroying the country and now many Thais have contempt for tourists.  This of course has happened to various extents in tourism destinations all over the world.

But a Thai pack attack is as old as the hills.  They were first described by Anna Leonowens, the nanny in the Hollywood musical ‘The King and I” . The British nanny to King Mongkut of Thailand described an unprovoked pack  attack on her Indian servant. Thais did not like the colour of his skin.

Pack attacks are quite common in Thailand. They invariably take place in ‘red light’ areas . These areas are generally safe and indeed so welcoming and friendly that foreigners do not even consider that they could attract the same sort or ne’er do wells as similar venues  doing other parts of the world.

That is in fact part of the ‘smoke and mirrors’ of Thailand. Everything seems ‘sabai’ (happy) and ‘sanook’ (fun).  It is not really a ‘What you see is what you get’ country. But the illusion is nice.

Pack attacks can happen elsewhere, where tourists are vulnerable. At every Full Moon Party on the island of Koh Phangan for instance there are always groups in the shadows ready to pounce on stragglers.

Incidents there are so frequent they are rarely reported. And island police do not publicise stuff which could affect tourism.

In Ao Nang in Krabi Province of Thailand Jack Cole was stabbed multiple times in a pack attack from Thais who lay in wait for him and his girlfriend.  There was no apparent motive.

On Koh Samui, one of the most popular destination for Brits in Soi Green Mango, where the main club the Green Mango, is half owned by police, I have watched as a young Briton was beaten to a pulp and bottled by a group of Thais and left unconscious on the ground after apparently insulting a motorcycle taxi driver over the fare he wanted to charge.  Did I go to his help?   No I would have not stood a chance against the pack. I had already seen other pack attacks by then.

When I married in Thailand I had my ‘stag do’ in Soi Cowboy in Bangkok. It was by no means a rowdy affair, more of a middle aged bar crawl, and two nephews had flown over from Denmark and the UK for the wedding.

The best man held the kitty but at some stage the young lads on their first visit to Thailand became separated from the group and remained in a bar for which the bill had already been paid.

It appears they left the bar not paying for their  (further) drinks (thinking they had been paid for). There appeared to be no room for negotiation.

They were attacked by a horde of motorcycle taxi drivers at the end of the Soi.  My brother heard the commotion, tried to save his son, and got struck with a baseball bat.  Two were treated in hospital and one section of the wedding party thus looked like they had come from Gallipoli.

The people doing the attacking were not those losing money through unpaid drinks – an indication that some Thais at least are willing to crack the head open of a foreigner with little need for motive.

But bar bouncers will happily join in and beat a drunken tourist as in this incident from Phuket last year below.

Despite Thailand having one of the largest per capita police forces in the world – there is rarely a policeman around for these occasions. I have never seen any being broken up by police.

In the Hua Hin incident police told the Bangkok Post they were short staffed. Hua Hin does not have the rowdy reputation of Pattaya or Patong Beach, Phuket, but it is not as quiet as some people make out.

It is one of the centres for property fraud on foreigners. One such victim was Keith Burbage a Briton who made his fortune buying into HM Stationery Office when it was denationalised.  He bought a home in Hua Hin which he never got., instead being offered something else.

He was ambushed in Hua Hin by Thais almost certainly commissioned to carry out the act and these were his injuries.

The fact that there is a tacit admittance that violence can happen to foreigners is shown by the plan by the National Tourist Police Chief in 2008 to issue ‘alarm whistles ‘ to female tourists after a series of attacks and murder of Swedish  tourist 27-year-old Hannah Baklund in Thailand.

But his concern was not so much Thailand’s red light areas.

The Tourist Police chief also suggested wrist bands for all tourists so they could be return to their hotel, or a hospital, when they were involved in an incident after which they could not speak.

International disquiet was heightened in 2014 by the murders of backpackers Hannah Witheridge and David Miller on the southern island of Koh Tao.

Now most western governments warn about the dangers to tourists in Thailand in their travel advisories, but they can be often couched in terms inoffensive to the Thai government. 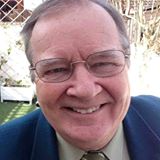 Working as a foreign correspondent in Thailand covering amongst many things the increasing number of foreign criminals making Thailand their home my concern was not about ‘pack attacks’. It was meeting foreign criminals arm in arm with bent Thai police generals.

Footnore: Below: Not all attacks are on westerners.  Here’s a gang attack on a young Laotian woman in Thonburi which the Daily News in Bangkok flagged today.

THE REAL FEARS FOR CHINESE DISSIDENTS IN THAILAND

February 1, 2016 Andrew Comments Off on THE REAL FEARS FOR CHINESE DISSIDENTS IN THAILAND