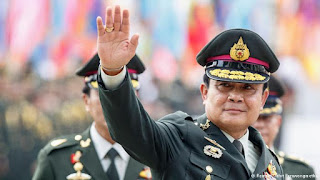 Thailand’s military dictator General Prayuth Chan-Ocha who has jailed many dissenters and is now making undisguised and widespread threats to jail more – has firmly targeted journalists in a bid to push through a new constitution which will drag the country back 100 years.


The latest arrest of the Prachatai journalist is a case in question. Officials of Amnesty International have already felt his heat.

Several foreign journalists have of course left – and the foreign media seems a little bit muted about what is going on in Thailand – suggesting a little bit of self-preservation here.

Unfortunately while this is going on Thailand’s justice system has shown itself not to be independent – a little bit of self-preservation there too – and the education system is getting almost Dickensian.

The secret of running a referendum Thai military style is of course no secret. Only let one voice be heard – that of the military government. Too late to advise David Cameron though.

This is of course being followed by Thailand’s new immigration policy ‘Good guys in, bad guys out’, which translates to ‘Bad guys in. Good guys Out’ and which judging by the number of East European oligarch’s in the UK, Chan-Ocha might have cottoned on to by merely watching English Premier League football..Leicester City excepted of course.


On July 10 in Ban Pong district, Ratchaburi province, police arrested three activists from the New Democracy Movement (NDM) – Pakorn Areekul, Anucha Rungmorakot, and Anan Loked – for violating the Referendum Act after finding NDM booklets criticizing the draft constitution in their car. The police also arrested Taweesak Kerdpoka, a journalist with the Prachatai online news agency, while he was traveling with the activists. Later that day, police arrested another pro-democracy activist, Panuwat Songsawatchai, on the same charge after accusing him of helping to deliver NDM booklets in the district.


“Arresting peaceful activists is bad enough, but jailing a journalist for reporting on the ‘vote-no’ campaign is a serious blow to press freedom in Thailand and any hopes that the vote on the constitution will be a fair one,” said Brad Adams, Asia director at Human Rights Watch. “With each day the Thai junta is undermining the legitimacy of its own referendum.”


The authorities should immediately release and drop all charges against the activists and journalist, Human Rights Watch said.


The ruling National Council for Peace and Order (NCPO) junta, chaired by Prime Minister Gen. Prayut Chan-ocha, has imposed conditions for the constitutional referendum that have increasingly hindered open public discussion, Human Rights Watch said. Article 61 of the 2016 Referendum Act, which governs the referendum process, criminalizes “anyone who disseminates text, pictures or sounds that are inconsistent with the truth or in a violent, aggressive, rude, inciting or threatening manner aimed at preventing a voter from casting a ballot or vote in any direction or to not vote.” Violators face imprisonment up to 10 years, fines up to 200,000 baht (US$5,600), and loss of voting rights for 10 years.


On April 19, General Prayut said that opponents of the draft constitution “have no rights to say that they disagree… I don’t allow anyone to debate or hold a press conference about the draft constitution. Yet they still disobey my orders. They will be arrested and jailed for 10 years. No one will be exempted, not even the media.”


On April 18, the authorities arrested Watana Muangsook, a prominent Pheu Thai party member and former government minister, for posting commentary on his Facebook page that he would reject the draft constitution. United Nations Secretary-General Ban Ki-moon raised concerns during a telephone conversation with General Prayut on June 20 about the stepped-up repression ahead of the constitutional referendum. But on that same day, Thai authorities charged 19 leaders of the United Front for Democracy against Dictatorship (UDD) with violating the junta’s ban on public gatherings of more than five people for opening a referendum monitoring center in Bangkok. On June 23 in Bang Pli district, Samut Prakarn province, soldiers arrested 14 activists who were handing out leaflets urging voters to reject the draft constitution.


“Both the United Nations and Thailand’s international friends should press hard for General Prayut to immediately end the arbitrary arrest of critics and dissenters, and drop criminal charges against all those who peacefully express their political opinions,” Adams said. “The junta can’t expect the Thai people to just shut up and vote on the draft constitution without any debate.”

‘MOVE ALONG. THERE’S NOTHING TO SEE HERE!’ THAILAND’S FISHING INDUSTRY IN 2018

January 23, 2018 Andrew Comments Off on ‘MOVE ALONG. THERE’S NOTHING TO SEE HERE!’ THAILAND’S FISHING INDUSTRY IN 2018