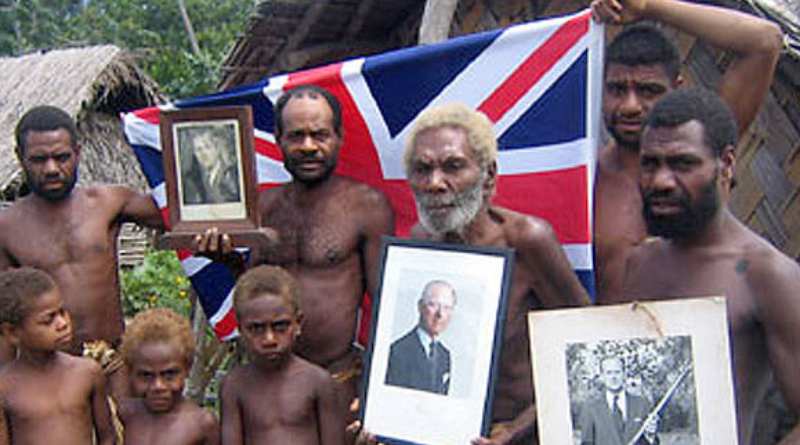 The island nation of Vanuatu is concerned about a former ex-pat Bangkok businessman.

Rather, observers of a recent junket to Bangkok by MPs of the country – formerly known as the ‘New Hebrides’- to seal a deal to market the country’s passports, are worried.

Vanuatu has been viewed in the west as a nation famous for it’s ‘Cargo Cults’ tribal people who pay homage to such celebrities as the Duke of Edinburgh, and after the Second World War. 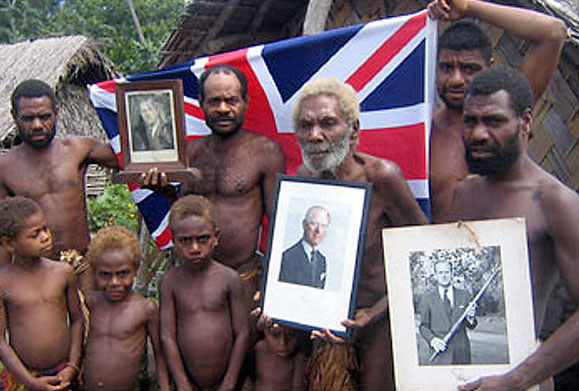 Now there’s another crazy story that that a large part of its economy is being taken over by an English ‘Lord’ with a colourful history in Bangkok’s night life.

He is of course, ‘Lord’ Geoffrey Bond, who has featured on this site not only in relation to his activities in the nightlife of Bangkok with very dubious partners, but more recently about the launch of his new crypto-currency ‘Nummus Coin’.

Now he has attracted the attention of the media in the Vanuatu.

According to the Vanuatu Daily Post, Bond invited the delegation of MP’s from the island paradise, to Bangkok, to conduct the official appointment of Harvey Law Group as passport sales agent for the country.

“Vanuatu’s non-tax revenues have grown from VT 1.56 billion in 2014 to an anticipated VT 4.3 billion in 2018. Nearly all this income is derived from the sale of passports. This is the country’s single largest income source after the VAT”

Andrew Napuat, who is Parliamentary Secretary for Provincial Affairs, led the delegation to Bangkok, which may not seem to many as the most natural place in the world to celebrate such an event as Harvey Law is actually based in the Vanuatu capital ‘Port Villa’.

But all sorts sign deals, hold conferences, in Bangkok. Why not Vanuatu MPs?

Besides, ‘Lord Bond’ – well he’s not a lord really. He just bought a Lord of the Manor title – with his long history in Thailand could have a contacts book full of people who want to hide their money. 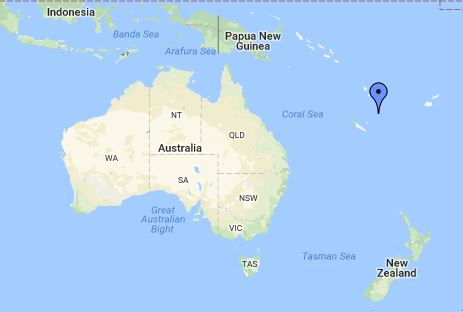 ‘Lord Bond’ is now, according to the ‘Post’, Chairman of the Vanuatu Information Centre, which is apparently based on the 6th floor of the Meridien Hotel in Ho Chi Minh city, Vietnam.

Again, one would expect such an organisation to be in Vanuatu’s capital Port Vila.

He is also in Vietnam as chairman of Nummus Entertainment, where he is ‘working with the Vietnam Government on the Online Lottery and Floating Casino licenses.’

These are heady days and a far cry when he was running ‘Wolf’s Bar’ bar in Bangkok with the likes of Briton Mark Hallett, wanted by the Avon and Somerset police for frauds totalling nearly £4 million.

But, of course, the Vanuatu MPs appear not to be shaken by any stuff appearing on the net. When a Post journalist pointed to the negative publicity Bond has received on this site, Andrew Napuat replied.

“I am surprised you are linked to Andrew Drummond who has been jailed in Thailand and has arrest warrants for defamatory articles on people.”

Ouch! But this is all news to me as I have only been in Thailand’s jails to visit criminals or the accused.

Along with literally 50,000 others I have of course been sued in Thailand under the Thailand’s criminal libel laws.  But I have seen my main pursuers off: – two running abroad with their tails between their legs after being convicted of the real criminal charges of extortion and fraud. (Messrs Brian Goudie and Drew Noyes).

The one case I lost was never going to end in a jail sentence as I merely refused to remove a post referring to  Noyes’ business partner, David John Hanks, as a former ‘pimp’.

Indeed, Australian Securities and Investment Commission records show that David Hanks, a Brit-Australian, was the former proprietor and license holder for ‘Masquerades’ a registered brothel’ in Keysborough, Melbourne.

Never mind that. David Napuat has clearly been pointed in the wrong direction and I wish Vanuatu all the luck in the world.

“The question here is not one of legality, of who did what when. The question is whether, all things considered, the people of Vanuatu feel that ‘Lord’ Geoffrey Bond is the best possible candidate to act as the face of Vanuatu to the rest of the world?”

“We dealt with him in good faith on the basis of his status as Honorary Consul for Vanuatu.”

The Graon mo Jastis party has always campaigned on an anti-corruption platform.

I should add that this party ‘Land (ground) and Justice’ also campaigns against foreign ownership of land and businesses on Vanuatu.

You can now buy Vanuatu citizenship with Bitcoin.  This has nothing to do with Geoffrey Bond’s launch of his new crypto-currency ‘Nummus Coin’, which I highlighted in an earlier story. But it does pose questions.  Nummus Coin is registered to a Vanuatu address.

Lord Geoffrey by all accounts is a ‘long time player’. An associate on the fringe of his group in Bangok commented recently: “He is the sort of person who entered a revolving behind you would come out ahead of you.”


We have have to wait a while before Nummus Coin, launched at the end of last month, kicks in, if indeed it does.

But if the Vanuatu government is being briefed that I have done stir in jail in Thailand it may well be that may be that it has been briefed erroneously in other matters.

There is certainly big cash to made in this business of selling citizenship. On Vanuatu passport sales, the agent gets about 10 per cent, US$20,000, on all passport sales, according to the website imidaily.com. 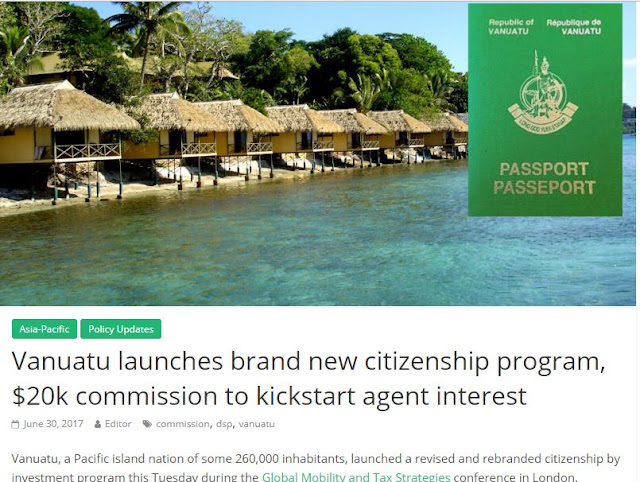 “To pique the interest of promoters and agents globally, the scheme comes pre-built with a commission of US$20,000 (and in certain cases, even more,” said James Harris of the Vanuatu Information Centre at a launch in London in June.

From Vietnam, ‘Lord Bond’, acting as Vanuatu’s Honorary Consul, offered Vanuatu citizenship as US$350,000 on his own website. 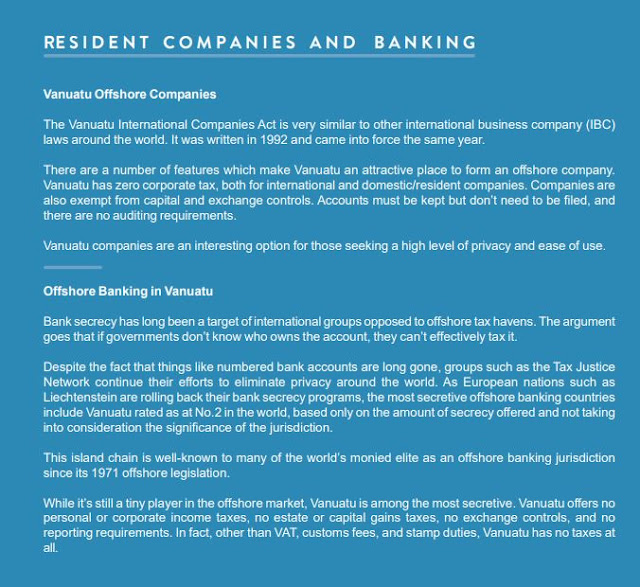 Now the programme has been changed. Under the new government Development Support Programme it is now offered at US$120,000 – or whatever that is in Bitcoin.

Seems foreigners could be making a killing in Vanuatu.

This all bring up memories of Sparta Matrix, the boiler room founded in the Philippines, which ended up bidding for infrastructures in Croatia with American boss Philip Wainwright courting the Prime Minister.

Geoffrey Bond says he has spent most of his working life in Asia. He needs to fill in the detail with the Vanuatu government. One thing we do know. He’s been proved to be not too fussy about where the cash comes from.

Will he have a hand in vetting Vanuatu’s new citizens? It seems so.

‘BEWARE YOU WILL BE IN CHOPPING PARTS OF MEAT IN VANUATU’

“Hi Andrew Drummond. You better watch your feet getting in Vanuatu you will be in chopping part of meats beware of Vanuatuan people searching for your face and name! I hope Thai court do rot your white ass in hell for the rest of your life! Stupid fat white pig! Byeeee for now.”

A few minutes later this was followed by the comment:

“Oh accidently my bad I sent the message to the wrong person forgive me! I referred to the journalist of UK lol”.

I replied immediately that he must have got the right guy. I was in the UK. So, we had a conversation and now we are friends.

He had been directed to one of the numerous websites set up to discredit my investigations in Thailand by those who had been celebrated here. In the internet age of disinformation this is de rigeur.

This was his parting message.

“Sometimes in life people will get to use your name in a ruined way. What a poor thing! Only the way is to fix up and it may take time to clean a person’s name. Sorry for running you time you too have a good night sleep xo.”

I think this poor thing would like the Vanuatu people.

Another thing MPs there have been campaigning about is a return to tribal law, replacing court trials and where the Chief decides. The reasoning behind this is to avoid ridiculous legal fees.

This would be infinitely better than going to a Thai court for justice and would have been an excellent way to deal with for instance the guys that sued me, namely fake American lawyer Drew Walter Noyes and fake British barrister Brian Goudie, aka Goldie.

Noyes incidentally is now in Green Valley Drive*, Wilmington, North Carolina, having fled his conviction for trying to extort the Thonglor Beauty Clinic in Pattaya out of 7 million baht and prison sentence.

Like Brian Goudie, from Falkirk, Scotland, he could pay the court a suitable sum, to leave the country on urgent business, promising to return to hear the result of his appeal.

Noyes has been trying to make a living advising foreigners how to get ‘Green Cards’ to the United States and even put his house up on Airbnb – but took it down very quickly, due to reader reaction.

Goudie, who was jailed for three years for extortion, to add to his history of a six-year-jail sentence in Australia for theft, and running from a police fraud investigation in Scotland, is reported to be back in Scotland and has been putting out stories that his Thai girlfriend is studying at university in Edinburgh.

Both Goudie and Noyes lost their appeals.

*Noyes paid his tax on Green Valley Drive by selling
worthless shares in his now defunct Pattaya Times newspaper for 1 million baht
and a work permit, to a native American Indian from southern California. 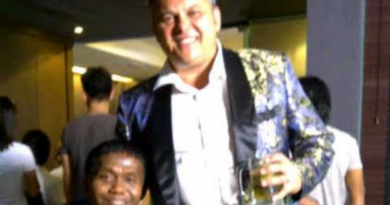