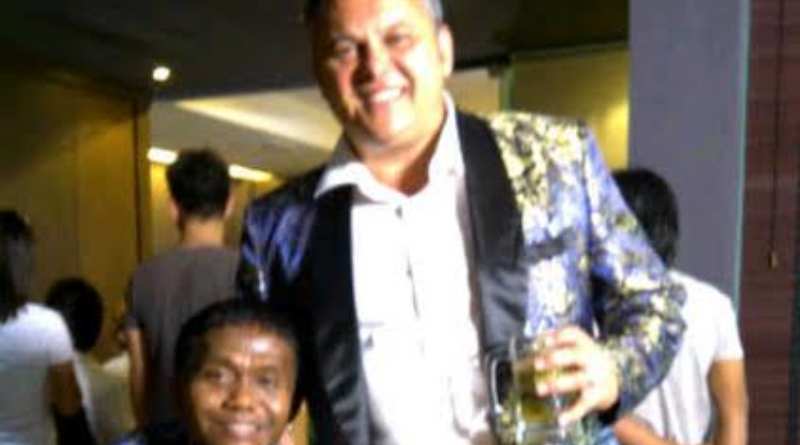 Plans to accept payment in Bitcoin for citizenship or the South Pacific island nation of Vanuatu have been shelved. The move, announced by Lord Geoffrey Bond, once a leading figure in Bangkok’s ‘night life’ has been declared a non-starter.

But Bond – he’s not really an English lord – still apparently carries authorisation to handle what the Vanuatu Post has described as ‘the country’s single largest income source after the VAT.’


He is currently an Honorary Consul for Vanuatu in Vietnam from where he also runs the Vanuatu Information Centre, which sells the citizenship packages.

In Bangkok Bond went into partnership with Briton Mark Hallett, who is wanted about fraud totalling nearly £4million by Avon and Somerset Police.

He ran a company called Pleasure Worldwide Ltd, and ‘Wolf’s Bar and Restaurant on the Sukhumvit Road, which folded in 2014 leaving investors out of pocket.  He also promoted an art club called ‘Spanks’ which promoted ‘an aristocratic feel. More playful, lest stuffy’. Nothing came of it.

This week following reports carried globally including by Bloomberg and the Financial Times that Vanuatu would accept Bitcoin for citizenship, the Vanuatu Government announced that it would not. 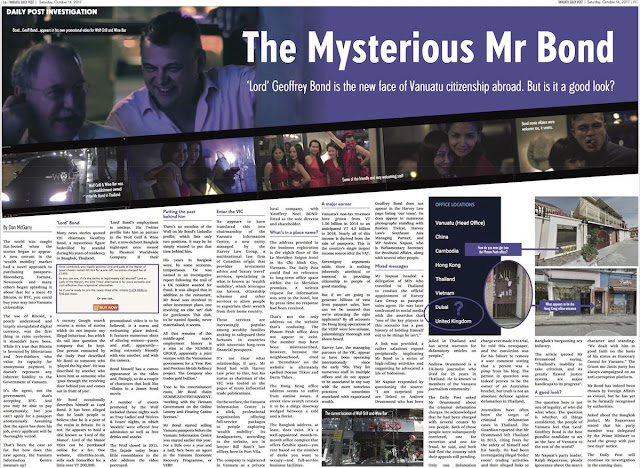 Following its own original report (above) on the Bitcoin plan while highlighting investigations on this website the Vanuatu Daily Post yesterday reported the following.

This flew in the face of a press release put out by Lord Bond’s Vanuatu Information Centre, which published part of a letter of authorisation for the Bitcoin plan purported to be from the Office of the Parliamentary Secretary – Provincial Affairs. 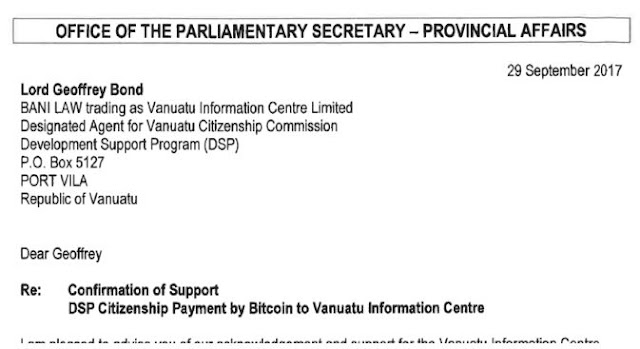 The Government of Vanuatu, represented by Parliamentary Secretary to the Prime Minister, Hon Andrew Solomon Napuat MP, has confirmed in an official letter addressed to Geoffrey Bond, Chairman of the VIC, the entity that handles all applications to the Vanuatu DSP Citizenship Program, that the Government supports the VIC’s taking payment in Bitcoin. This marks the first time a citizenship by investment program obtains official endorsement to take payments in a crypto-currency.

“This is a significant step forward in our efforts, working with the Government of Vanuatu to propel the Vanuatu DSP to the forefront of CIPs globally”, said James Harris, Managing Director of the Vanuatu Information Centre Network.

He added, “there remains some suspicion surrounding the use of crypto-currency in financial transactions, and some fears that it can be related to undesirable activities. In fact, the opposite is true, as crypto-currency exists in a fully traceable ledger where the entire history of its creation and trading is visible. Therefore, our pioneering of the use of Bitcoin payment is a further strengthening of AML processes, and at the same time provides enormous flexibility in a world where international financial transactions have become ever more difficult”.

Chairman of VIC, Geoffrey Bond commented, “While attempts have been made in the past to effect payments for citizenship by investment programs via Bitcoin, these efforts never had the political stamp of approval, and were shut down as a consequence.

“However in this case, the Government of Vanuatu has explicitly expressed a desire to be at the forefront of adopting new technologies, officially encouraging the VIC to receive payments in Bitcoin.”

He added, “In addition to the normal due diligence probity checks that are required to obtain Vanuatu Citizenship, all Bitcoin transactions will be run through our partner’s Australian Exchange and meet with the normal compliance requirements imposed by the Australian Financial Regulator.”

“I’m convinced Vanuatu’s bold move will give them a considerable competitive advantage in the citizenship market,” said Christian Nesheim, an investment migration specialist who advised the VIC and the Vanuatu Government on Bitcoin adoption during their visit to Bangkok last week.

“Many early investors in Bitcoin would like to realize some of their earnings without incurring large capital gains taxes. Ideally, then, they would convert their cryptocurrency into tangible assets in a low-tax jurisdiction. So far, the asset classes available to this type of investor have been limited, but we are now seeing an increasing number of crypto-to-real-assets type investments on offer.

The Parliamentary Secretary for Provincial Affairs David Napuat.  led a delegation of Vanuatu MPs to Bangkok at the end of September.

The purpose of the trip appeared to be to celebrate the Bitcoin deal and the appointment of Harvey Law Group as first agent of Vanuatu’s Development Support Programme, which takes in income from the passport sales. But that had already been celebrated in Vanuatu.

When questioned about Lord Bond’s suitability for his cash handling role and guided to information on this site David Napuat replied told the Vanuatu Daily Post: “I am surprised you are linked to Andrew Drummond who has been jailed in Thailand and has arrest warrants for defamatory articles on people.”

This of course came as a considerable surprise to me but I must assume David Napuat is not internet savvy. 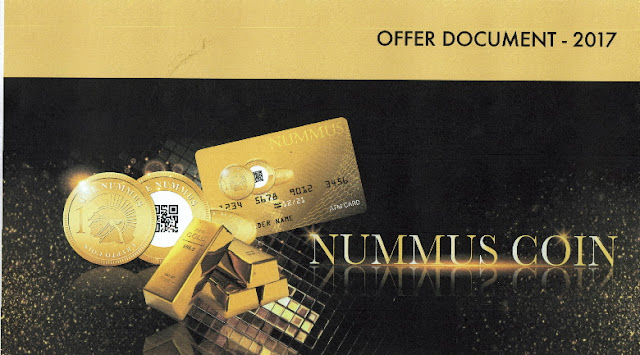 Coincidentally the trip to Bangkok also coincided with the very day Geoffrey Bond had listed for the launch of his ‘Nummus Coin’ crypto-currency. This is one of that increasing number of crypto-to-real-assets type investments on offer’ following the seeming success of Bitcoin. 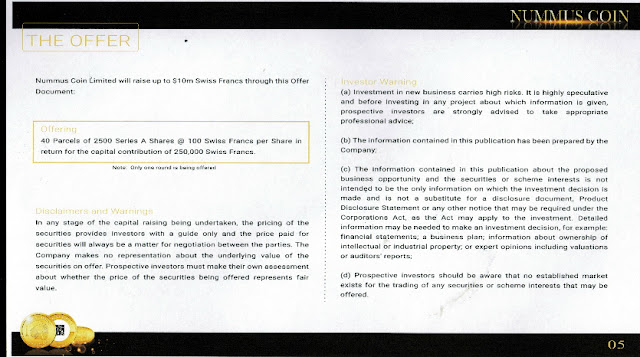 However, Bitcoin still has vociferous critics who predict the ‘bubble will burst’.

Is this just a coincidence?   And what were the M.P.s really doing in Bangkok. The Vanuatu Daily Post has its work cut out.

Lord Bond need not be disheartened. James Harris, who works for Harvey Law and also represented VIC at a re-launch of the passport scheme in London in June said:

“To pique the interest of promoters and agents globally, the scheme comes pre-built with a commission of US$20,000 -and in certain cases, even more.” 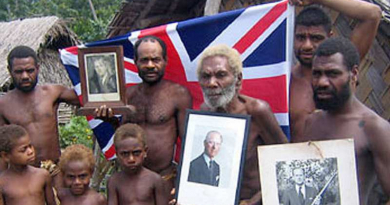 IS BRITISH LORD IN BANGKOK JUNKET THE NEW FACE OF AN ISLAND NATION?

October 14, 2017 Andrew Comments Off on IS BRITISH LORD IN BANGKOK JUNKET THE NEW FACE OF AN ISLAND NATION? 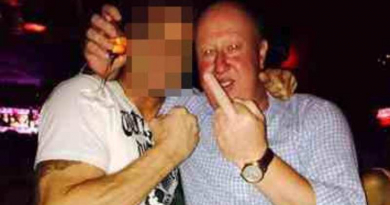