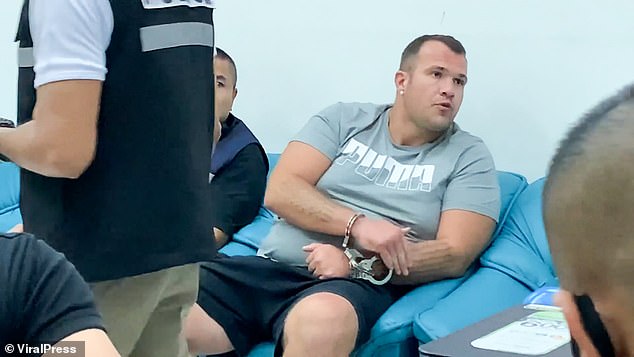 Various Thai media and the Daily Mail using its vast reserve of internet trawling online reporters have been running a story this week about 33-year-old Benjamin Robert Simpson an alleged wealthy crypto currency dealer who, while high on methamphetamine indulged in a shooting spree from his speedboat off the Thai island of Koh Samui.

The Daily Mail is predicting he may go to jail for life. I am predicting a much shorter period once this story has died.

Simpson, 33, had apparently arrived in Thailand as a tourist and then decided to become a crypto-currency dealer, so go the reports. Now he is wealthy and able to own a speedboat, take drugs and fire off from his extensive arms collection outside the expensive Four Seasons Hotel in Samui, where he has staying.

Police arrested him and his boat ‘Captain’ (all boats registered in Thailand must be skippered by Thais) who had also been taking drugs. They seized two guns and a bag of methamphetamine from his hotel room.

What a great advert for crypto currency. Go on holiday to paradise. Take up the crypto-currency challenge and be rich for life. Why did Sir Phillip Green bother to make his money in the retail business? Is Simpson a genius?

I do not think so. Young Brits in Thailand who describe themselves as Forex Traders or Crypto-Currency dealers are more often than not ‘Boiler Room’ scammers, best highlighted by the Hollywood Film ‘Wolf of Wall Street’.
Working from VOIP lines they pretend they are working as brokers in one of the world’s financial centres and offer shares to the public which they say will rocket when they are listed on one of many Stock Exchanges.

If the shares are genuine they do rocket for a while because they are being ‘pumped’. Then the rug is pulled out from under them. Boiler room scammers have, however, taken more recently to offering shares that do not even exist And they can sell crypto currency in the same way.

They have taken hundreds of millions from punters in the U.K. and, as they pay off Thai Police and Immigration authorities, Britain’s and the world’s anti fraud have been have been unable to do anything about them.

And if Mr. Simpson is in fact a boiler room operator then Thai police have hit a goldmine and in Koh Samui they are highly creative when it comes to getting their bonuses.

Boiler room operators, predominantly British (the major American ones are now dead) had taken over vast swathes of the nightlife industry in Bangkok and Pattaya and bought expensive villas on Koh Samui before the Covid lockdowns. Thailand is now in its second, but with a miniscule number of deaths compared to the UK.