He’s back! Drew Noyes the American founder of the Pattaya Times newspaper is back in the headlines again in the resort city – and features in no less than ten photographs in his newspaper, which has been off the streets for a month: –

And he’s back with a new unbelievable offer.  – But needless to say – BEWARE! 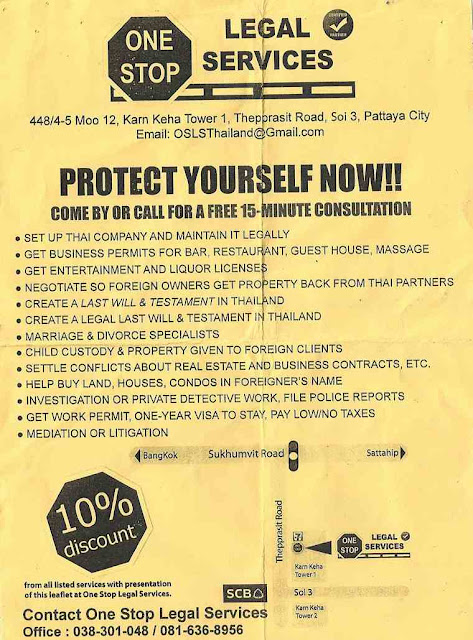 In this leaflet above he promises two types of will for clients who want to make one in Thailand. One of them is legal!

There’s no stopping  Drew Noyes, who was arrested earlier this year with his ‘wife’ Wanrapa Boonsu, the editor of the Pattaya Times, on extortion charges, and who was the subject of a major expose in the Wilmington Morning Star in North Carolina, long before he graced Thailand’s shores.

Now he’s been doing the rounds posing with police generals etc. and hobnobbing with the élite again. He’s mixing with the hoi poloi while trying to raise cash from homes built for Thailand’s ‘working class’. Ah capitalism.

In the Pattaya Times is a new company called Pattaya Management & Development Company Ltd., but this of course points to the address and telephone numbers of  Noyes’ PAPPA Co. Ltd., in Karn Keha Building, Thepprasit Road, Jomtien. 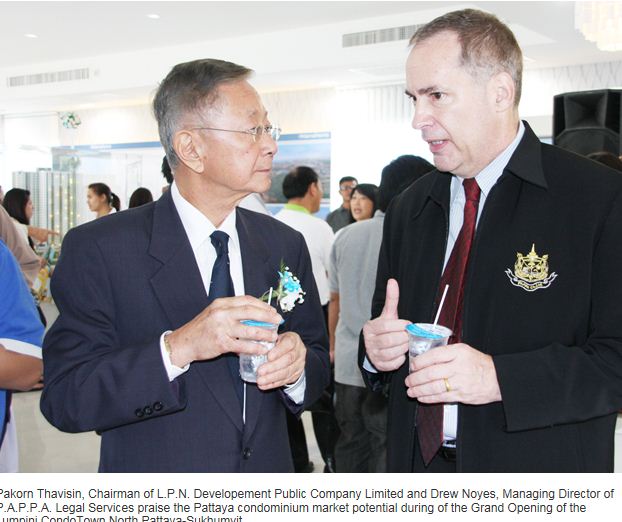 But be careful Pattaya Management & Property Development are currently seeking loans from foreigners to invest (US$90,000) in condos in Lumpini Condotown on Pattaya’s ‘prestigious’ Sukhumvit Road.
.
Here’s the blurb! 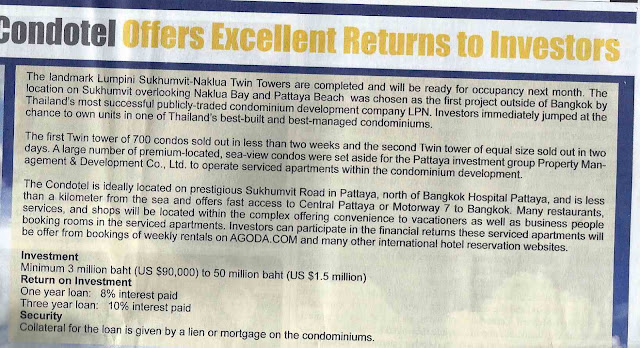 ‘Investments are made by way of a loan to the management company secured by the First Trist Deeds on the underlying assets.

‘This means for each unit for which you make a loan your name will be recorded on the title deed and at the Land Office so that the loan is 100 per cent secured by the CURRENT value of the condominium’. 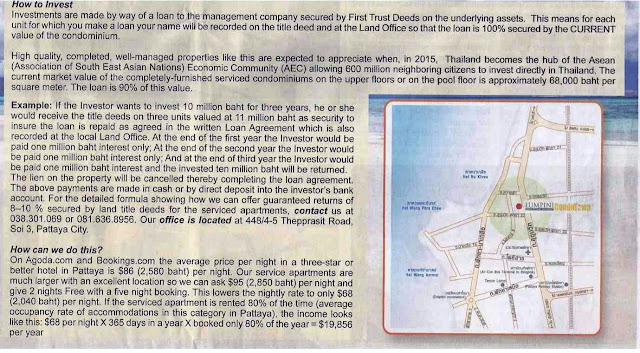 Advertising for these properties by LPN has only been in Thai on the internet.  This development was designed as cheap housing for Thai people in Pattaya to give the not so well of a chance to own a home of their own.

This is what Opas Sripayark, Managing Director of L.P.N. Development Public Company Limited had to say:

“We conducted various studies on the lifestyles of the working class in Pattaya and discover that these people we want to own a place of their own that is nice, affordable and has easy access.”

If all these properties were sold out in the first few weeks then one has to assume that the Pattaya Management and Development Co. Ltd, purely wanted to step in as a middle man and make a killing when they were built.

But now, for those who bought to speculate, is the time to put their money down. As the condos are about to completed, they have to pay or take out mortgages and the developers are not walking away.
That’s where the foreign punters come in it seems.

This is what L.P.N. Chairman Pakorn Thavisin had to say: That’s him talking to Drew Noyes above. Would he have told Khun Pakorn his plans?

“We do not leave our projects after the sale. We stay with the building and help to make it a community. We even publish a magazine for owners so they know how to live in harmony together since many of them have never lived in a condominium before.”

Of course I guess everybody could be lying. But that’s not good either if you’re investing! But my money is on Khun Pakorn telling the truth.

So do not believe these 100 per cent guarantee promises that you will get your money back plus 8% to 10%.  They are not offering you the deeds of the property. You’ll be making a community – somebody else’s!

Ask around and find out how difficult it is to get someone to repay a loan in Thailand let alone one to you know who.

And it seems almost superfluous to state that the claim that they will be able to ask 2,850 Thai baht a night in rentals from Agoda and Bookings.com is a load of old cobblers. 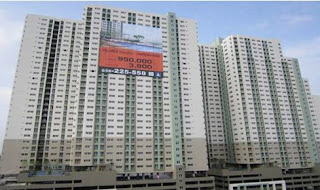 An independent estate agent I called estimates the possible rental at between 7000 to 10,000 a month but not from a Thai.

“It looks a bit like the Sir Francis Chichester estate in Lambeth”.

Personally if I want to be in Pattaya I will rent a room in Pattaya, not five miles out, and next year I’ll still be able to get one with a pool outside my door at half that price if I can do it now for 800 baht.

And no these properties are not expected to appreciate drastically in 2015 when Thailand becomes the hub of ASEAN, as is claimed. Prices will rise according to the markets.

The figures do not add up.

These units are what they are – nothing else. But who ever bought up a batch of these condos believing they constituted a cash cow to offer to foreigners as security for loans, had no concern that he had deprived them from ordinary people who wanted an affordable place to live.

Links:
How Drew Noyes ripped off the BOI One Stop Service

Footnote: Drew Noyes has posted on his website andrew-drummond-watch.blogpsot that this site has 15000 plus daily visitors and is worth US$140,000.  I wish.
However I can confirm that we have risen now from a 550th  Alexa placing 3 months ago to 317 in Thailand (behind mainly Thai language sites, social networks etc) and world ranking of 36,261.
Pattaya Times has 3,682 ranking in Thailand and 243,035 worldwide…and is valued I guess at three and fourpence.

December 24, 2010 Andrew Comments Off on Death Charges Confirmed On British Woman In Malaysia