The Thai General who was released from prison yesterday after serving nineteen years of a life sentence for murder actually lived the ‘Life of Reilly‘ in prison in Thailand – despite originally being sentenced to death, according to a fellow inmate.

General Chalor Kerdthes seems to have eluded the ‘Curse of the Blue Diamond’ and while in prison appears to have had the run of the hospital and an endless supply of Johnny Walker ‘Black Label’.

Convicted British drugs trafficker David McMillan – who boasts being the only prisoner to have escaped from Klong Prem Prison, where he was eventually sent after Bangkwang, told me in an interview, the first since his escape:

“General Chalor had an even more comfortable time than I did.  He was like royalty. He had taken over the prison’s ICU (Intensive Care Unit)  – which is course really meant for sick prisoners – as his own suite.

“Whenever I saw him, he was drunk.  He had his own supply of Johnny Walker Black Label, the drink of choice to many rich Thais.

“Must have done at least two bottles a day.  He even turned up drunk to court but dressed smartly and arriving in a police limo.

“I asked Chalor if he could help me with my case,” said McMillan.

McMillan was of course being interviewed prior to publication of his book ‘Escape’. He also says he had an easy time in prison having access to cash on the outside and had a small cell, food from supermarkets and his own butler.

But if there is one thing which permeates the whole ‘Blue Diamond’ affair – the theft of the Saudi Crown jewels – honesty is not one of them. Corruption is.

The Saudi Crown jewels were stolen by a Thai worker in Saudi Arabia Kriangkrai Techamong in 1989 who was employed at the palace of Prince Faisal.

The jewels weighed 200 pounds and were worth US$20 million.

He tried to fence them in Thailand – then the balloon went up. Everybody wanted a piece of the action – not least the Royal Thai Police themselves.

General Chalor Kerdthes was accused of being the mastermind behind the kidnap of the wife and son of jeweller Santi Sithanakan. They were apparently murdered to cover up the kidnap.

Thai Police recovered a lot of the jewels, but then apparently replaced them with fakes which they returned to the Saudi Royal Palace.

Jewels suddenly appeared on the wives of the elite – before word of the ‘Curse of the Blue Diamond’ spread like wildfire.

This is what I wrote at the time: 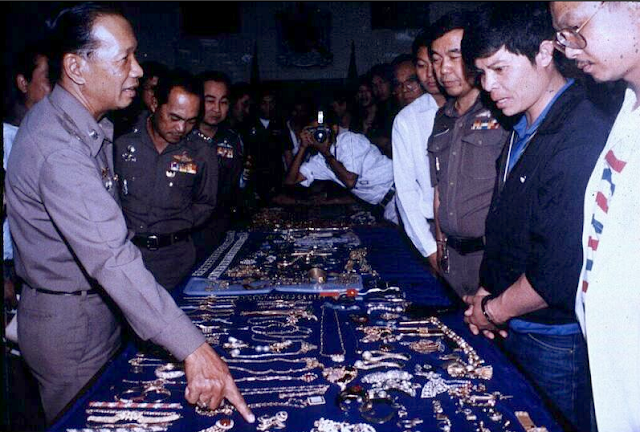 “Last week Thailand appeared to be dripping with jewels – part of a US$20 million – stolen by a Thai worker from Royal Palace in Riyadh (see earlier copy) and there was widespread belief “that the “Curse of the Blue Diamond” had led to the rush of people handing over the jewellery anonymously.

“Some 20 people associated with the jewels, the Thais believe, have died violent deaths.
But yesterday – one of the investigating officers – Thai Police Colonel Chumpol Mammai – admitted that police had secretly contacted people who had the stolen gems.

“So at the weekend in two separate incidents two cardboard boxes stashed with Saudi gems were placed on top of a monument in front of the old city hall of Chiang Mai – the northern Thai capital, and in a police box beside the town’s busiest bridge.

“And on Tuesday another haul was found in plastic bag dangling from a pole in the Thai Northern province of Phrae.  A note attached read: “I have kept the jewellery for a long time. I feel uncomfortable. Please return them to Saudi Arabia.”

“Earlier hauls have been found in Lampang Province in Northern Thailand, outside a newspaper office in Bangkok, and dumped by a speeding motorcyclist at a Bangkok police checkpoint.”

At about the same time Mohammed Said Koja. Saudi’s Charge d’Affaires went on the warpath in Bangkok holding regular meetings with the press – after receiving fire arms training. At about the same time between 1989 and 1990 four Saudi diplomats were gunned down in Thailand, but this is thought to be the work of the Hezbollah.

Saudi stopped Thai workers going to Saudi – some 100,000 were reduced to about 10,000 in a space of a few months – and downgraded the status of Embassy, to representative office. The Saudi Government also made it difficult for Saudis to visit Thailand.

The thief Kirangkrai Techamong was sentenced to only five years jail – and was out after two. This case compares very favourably with a British prisoner at the time who was sentenced to 12 years in jail for passing three dud travellers cheques, worth less than US$1000. Four years on each count – consecutive.

Getting Chalor convicted also seemed a problem. The sentence of death on Chalor was not confirmed by the Supreme Court until 2009 – now four years on he is out.

But just to show how bad this case got – read this from Wikileaks:

“During the subsequent prosecution of the kidnappers, two judges, one from the appeals court and one from the supreme court, attempted to extort millions of baht from the ringleader of the kidnapping plot, RTP Lieutenant General Chalo Koetthet. Both judges were charged with corruption and fired in 2001″.

DRUGS DEALER WHO ESCAPED BANGKOK JAIL – ON THE RUN IN LONDON

The spiel for McMillan’s book:

Klong Prem prison, Thailand, known as the “Bangkok Hilton,” is a place where 600 foreigners wait and rot among the 12,000 inmates. Amid the tragic, ruthless, and forgotten, one man resolves to do what no other has done: escape. This is the true story of drug smuggler David McMillan’s perilous break-out from Asia’s most notorious prison. After being arrested at Don Muang airport, McMillan spent more than a year in Klong Plem awaiting trial. He watched as the other foreign prisoners fell prey to disease, violence, and despair. Death appeared to be their only way out, but he resolved that this would not be the end for him. Two weeks before a near-certain death sentence, McMillan escaped, never to be seen in Thailand again. In this gripping account, he reveals the nightmare of existence in this infamous jail and explains how he made his hazardous jailbreak.