Under the headline ‘Dodge City’ Phnom Penh – the capital of Cambodia and the favourite bolt hole for foreign ‘refugees’ from Thailand – has taken a bashing in the Sydney Morning Herald – or at least some foreigners there have.

Reading a lengthy article by Stephanie Wood it would appear that the whole city is out to lunch.

Actually Stephanie describes Phnom Penh as ‘a wild-west town that’s home to about 3000 NGOs; a steamy, rumour-mongering municipality of girlie bars, orange-robed monks, begging rings, aid workers, expat do-gooders, rogues, outcasts, bums and people on the make, where tuk-tuks and motos fight for an edge with the Range Rovers favoured by Khmer generals and the city’s new rich.’

Steph seems to have captured the spirit of the place – as a foreigner sees it – in a nutshell. She of course being Australian focuses on two Australian characters.

The first is Steve Morrish the former boss SISHA (South East Asia Investigations into Social and Humanitarian Activities) who seems to have returned after resigning last year. He’s a former Police Constable, known apparently as ‘Bulldog’ and who started an organization to track down child sexual abusers with the slogan, would you believe (Steph writes) ‘Bugger a paedophile’ and Steve looks like he might!

The other is Aussie ‘Mama Ruth’ – Ruth Golder who ran a charity called ‘Love in Action’ – and reading about this one which cares for kids makes your hair curl.

Steve Morrish is of course well known to readers of this site after we reported on the discrepancies in his accounts and a lock in he imposed on what he thought were his enemies in the ‘Garage Bar’ in Phnom Penh.

Stephanie Wood gives a graphic account of the bar confrontation after Steve rants about a bunch of motley foreigners, or bottom feeders as he called them, who were hiding behind computer keyboards to attack him. 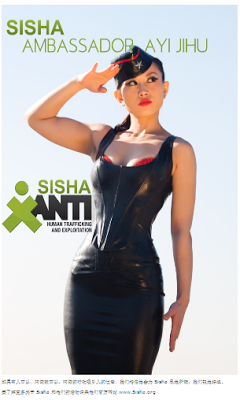 At the Garage Bar he said he would have them arrested and their visas revoked, showing of course that he is still a plod at heart – and somewhere along the way a British sausage maker is put in a headlock.

Apparently the police were called but the local policeman who attended was shirtless and drunk as a skunk.

To the left here is a promotional front page in a Chinese magazine for SISHA. An odd picture to chose for an ngo working in the sphere of child sexual abuse – but the caption is even odder.

‘If anyone can, Ayia can. Aiya’s actions attract attention. We believe she will Sisha every way she could. We wish her ​​good luck. website ww.sisha.org.”


There must be a SUN caption writer on the loose in China.

The Sydney Morning Herald story is here and a video interview with Mama Ruth by the SMH and The Age’s Lindsay Murdoch is here.

And a discussion about the subject is here on Khmer440, Phnom Penh’s pro-active forum. A poster asks ‘When will pubs in Phnom Penh come with panic rooms?’ –  Enjoy.