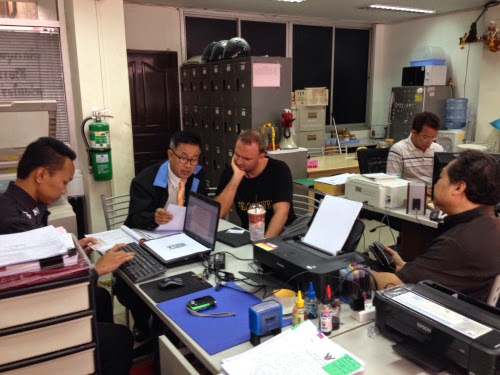 The occasion was more harmonious than a previous incident in which it is alleged that police tried to stitch him up with a confession. Andy Hall is being sued by the National Fruit Company for both criminal and civil libel seeking US$100 million damages. He was one of four members of a team who produced a scathing report for Finnwatch on the production facility.

Here follows a statement from Finnwatch

Natural Fruit Company Ltd., a company based in Prachuap Khiri Khan Province of Thailand, began a series of civil and criminal prosecutions against Andy Hall in February 2013. Charges relate to his role in conducting interviews with migrants from Myanmar to assist Finnwatch to compile a report, Cheap Has a High Price.

– His fingerprints were taken and he was questioned for almost four hours. Andy Hall reported that the police treated him fairly and transparently. He was provided free of charge a proper translator, certified by Thailand’s Ministry of Justice, and was able to leave after the hearing was over, said Finnwatch Executive Director Sonja Vartiala.

Last time Andy Hall visited Bangna Police Station on 28th September 2013, an officer attempted to get Hall to sign a Thai language confession accepting guilt to all accusations laid against him and translation offered was poor. Hall refused to sign the document, requested a copy and left the station.

During today’s appearance at the police station, concerning information was provided to Andy Hall that the lawyer for Natural Fruit recently contacted to the independent translator assigned to assist Hall by the Ministry if Justice.

Finnwatch sees all legal actions against Andy Hall as an attack against a human rights defender and his freedom of expression. 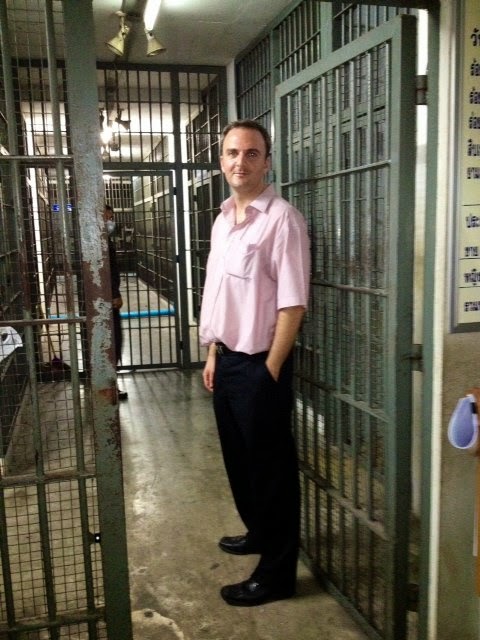 Legal action against Andy Hall has raised international criticism and several NGOs and global trade union federations have condemned these legal actions. UN Special Rapporteurs have asked Thailand to clarify how it ensures judicial processes in the country do not result in attempts to harass human rights defender’s work.

– Andy Hall has told us that he will voluntary take part to all judicial hearings. He has done nothing wrong and hopes that this legal process will shed only further light on systematic labour rights abuses in Thai exporting industries, says Vartiala.

Andy Hall is now scheduled to meet Thailand’s public prosecutor on 18th June 2014 when he will know whether the case against him will go to court or be dropped.

Together Natural Fruit has raised four charges personally against Andy Hall. Two criminal charges relate to defamation and breach of the computer crimes act and are pending summons delivery in the criminal court. A third charge relates to civil defamation. The case discussed today in Bangna Police station was the latest and fourth charge against him, also of criminal defamation.

If found guilty of criminal charges laid against him, Andy Hall could face together seven years in prison per count. Natural Fruit are also claiming seven million euros in damages from Andy Hall in the civil case against him.


Serious problems in Natural Fruit’s labour conditions have been highlighted in several other reports and research as well as the Finnwatch report, to which Andy Hall assisted. According to Finnwatch’s information, Thai authorities have not raised any legal actions against Natural Fruit.