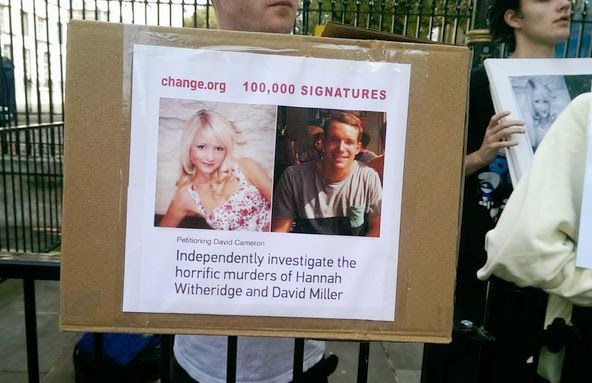 Protesters demanding an British government investigation into the murders of Hannah Witheridge and David Miller were successful today in handing their petition into the British Prime Minister David Cameron at 10 Downing Street.

The demo attracted quite a large crowd  including Burmese and Thai – although as usual only a selected few were allowed to approach the Prime Minister’s London residence.

The petitioners had gathered more than 100,000 signatures.

In Bangkok Ambassador Mark Kent went to see the National Broadcasting and Telecommunications Commission Board and was greeted by media activist Supinya Klanarong, not a woman who is shy to call a spade or spade.

The Ambassador’s visit was more diplomatic and of course the London protesters cared less about the Thai media than what the police were telling the Thai media. 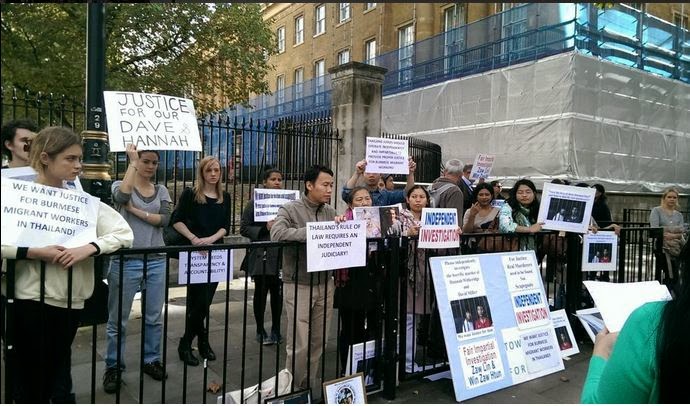 of The United Kingdom The Government, UK Ambassador to Thailand Mark Kent.

Independently investigate The horrific murders of Hannah Witheridge and David Miller. On September 15th, 2 innocent British Citizens – David Miller, 24, and Hannah Witheridge, 23 were Found raped and murdered in The Most horrific Manner Possible whilst on Holiday in Thailand on The Island. of Koh Tao.

The Thai police’s flawed handling of this crime has been a grave cause of concern from both the local and international community from the very start of the investigation.

The Thai authorities insensitive Obsession with Tourist figures and The Police’s Notoriously Corrupt reputation Around The World, has been in The Forefront of these Concerns. 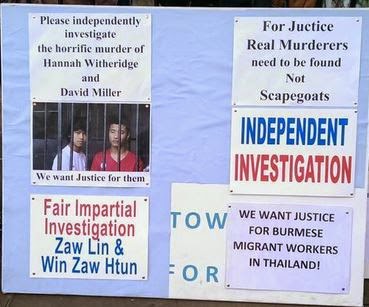 From a completely Destroyed Crime Scene, Racial slurs and Finger Pointing against Foreigners, Victim blaming from The General turned Prime Minister. , police posting pictures of the dead victims bodies on their FB accounts (with no regard for the victims friends and families), countless releases of unnecessary and highly conflicting pieces of information / evidence to the media, reports of investigators beating and offering bribes to false.

Witnesses (and then being allowed to Still Work on The Case), reports of torturing of Suspects, meeting and insensitive Re-enactments of The Crime, and The Well Known Fact that Citizens of Myanmar are The Usual Choice of scapegoats in Thailand. The International and local community are now not able to trust that the two Myanmar nationals, Win and Saw, have not had their confessions forced out of them or that evidence against them has not been tampered with. As such we can not also trust that they are responsible.

This being said, we demand a full independent investigation to be conducted by the government of the United Kingdom into these deaths. This is in the hope that the families of these victims may know justice has been served, and that the deaths of two more possible innocents might be avoided.

FOOTNOTE: After the protest Thai authorities allowed British detectives to fly out. However this appeared to have already agreed at a meeting with General Prayuth Chan-Ocha and David Cameron and the European Asean summit in Milan. Never the less this petition represent a significant part of the ongoing protest.