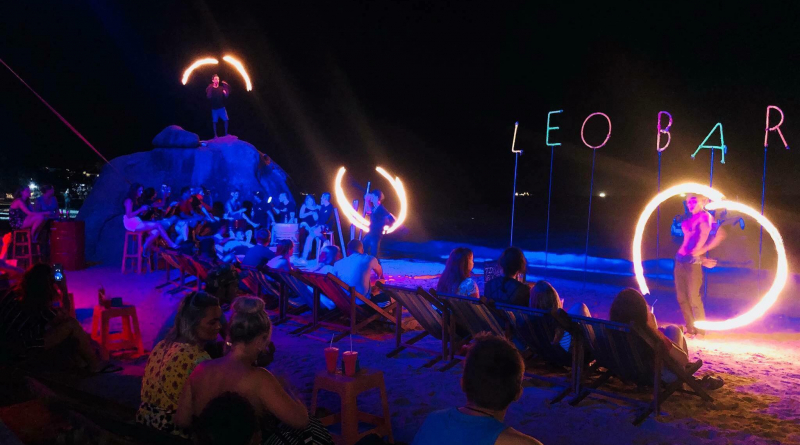 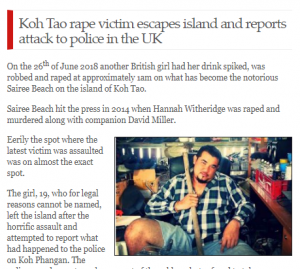 A  Thai barman linked to the latest tourist rape allegations on the Thai island of Koh Tao had been accused of several attacks on women on the island while a juvenile.

And yesterday he was reported to be in court charged with the brutal attack on a young Briton in the Leo bar on the island where the Samui Times reported this week a young British woman was raped after visiting the bar in June.

Nothing has yet been reported from the court.

A report in the ‘SUN’ yesterday has now confirmed that the family seem to have identified a man used in a picture by the Samui Times  as the same man who raped the British woman in June.

However there is a discrepancy over the the Samui Times’ main picture. The man with the hoe is a mechanic, who tastelessly posed with the hoe, with many others, after the ‘hoe’ murders of Hannah Witheridge and David Miller in 2014.  He is not the same man as the controversial barman ‘Sunny’ pictured below, say residents.

The woman was reported to be too scared to make a complaint on the island, but instead reported theft of her mobile phone, cash and debit cards, on the nearby island of Koh Phangan, where it is alleged police refused to accept the rape case.

The latest allegations come from the British victim of an assault by the bar man (left) followed by a second assault, a pack attack, outside the bar by fire dancers employed by the Leo bar to entertain tourists.

The young British businessman was on holiday on Koh Tao with his girlfriend. They were at the Leo bar when his girlfriend placed her purse and mobile phone on a table. After she looked away it was gone.

When he approached the bar to complain of the theft to the barman he said:

“I was halfway through my sentence asking if security can help search for my girlfriend’s purse. It looked like he was coming around to help me as he couldn’t hear me, but he walked up to me and just belted me in the face instead. No confrontation, no retaliation, no chance. I wasn’t prepared at all. I decided to get out there and then and we made for the door. But I was pursued and beaten outside.”

The Briton said that he tried to get medical treatment at three nearby clinics, but when they were told what happened and where, they would not treat him. He finally got treatment at the local public hospital.

While at the hospital the owner of the bar had sent staff from the bar to apologise together with his partner’s purse and mobile phone which they said had been handed in to them. The owner himself tried to make the large bartender take the rap for the pack attack, said the Brit.

“We went to police and the tourist police were very helpful. My partner is a medical professional and we made statements and were given a bodyguard and an escort off the island the following day.”

He said he and his partner had been liaising with the Thai authorities and the prosecutors since.
In the process of helping the authorities he said he was told his first attacker, the barman, not the man with the hoe, had been in ‘a monster’ as a juvenile and allegations had included rape and assault. He had been too young to receive a serious custodial sentence.

The fact that the British victim’s partner enjoyed a high status in Thailand would have made the authorities take the case more seriously.

“The fat guy confessed’ (to the first assault) he said adding: ‘The owner didn’t realise he was videoed with his five dancers (Myanmar staff) kicking me in the head outside 7/11 shortly after I tried to leave after the first attack.” (the second assault charges).

The charges against the bar’s owner and five Mhyanmar fire dancers are due to be heard in court next month, he said. 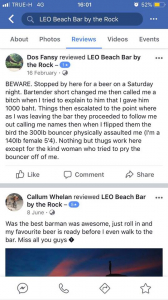 “I was advised not to attend the hearing today. I think that was good advice”.

The Briton’s account supports other claims on the net by tourists who have been assaulted around the Leo bar.

The fact that he and his partner were given an escort off the island also supports a ‘culture of fear’.

The British woman has, it is reported, made a complaint to Scotland Yard. Thai Police have confirmed they have been in communication with the British Embassy.

Scotland Yard have not commented.