On October 14 1973 some 100 students died when military officers brought in tanks and guns to quell demonstrations against the military dictatorship at Thammasat University and outside the Royal Palace. 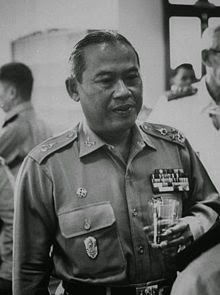 This event is commemorated every year and is known as ‘The Great Day of Sorrow’.

The deaths in fact brought down the military government of Thanom Kittikachorn, which had delayed return to a promised democracy.

Thanom and his deputy Praphas Charusathien tended their resignation to the King and had to flee the country.

Demonstrations were principally led by students, but there were wildcat strikes as well, and they had gathered more and more public support, with the exception of Bangkok’s middle and high classes, who were more concerned perhaps with their own status quo.

When the military took over last year they finally acted on those complaints and arrested two of the graduates and banged them up pending trial. They have pleaded guilty. The verdict will be announced on Monday.

Governments did not however get any better.

Here follows, without comment, a press release today from Thai Lawyers for Human Rights who believe the case should be thrown since it ‘stemmed from an peaceful exercise of the right to freedom of expression.’

Press Release
A Wolf’s Bride verdict to be delivered at the Bangkok Criminal Court at 13.30 on 23 February 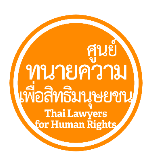 On Monday 23 February at 13.30, the Criminal Court is going to deliver a verdict on the Black Case no. 3528/2557 filed by the public prosecutor against Mr. Patiwat (last name withheld) and Mrs. Pornthip (last name withheld), the two accused in the lèse majesté case or violation of Article 112 of the Penal Code as a result of their involvement with the performance of the “A Wolf’s Bride” theatrical play during the 40th Commemoration of the 14 October Uprising at the Main Hall of Thammasat University, Tha Phra Chan Campus.

The case stems from their involvement with the performance of the “Wolf Bride” theatrical play during the 40th Commemoration of the 14 October Uprising on 13 October 2013.

After the performance, a group of people have pressed charge against them for “defaming, insulting, or threatening the King”, or Article 112 and it has led to the arrest of Mr. Patiwat (last name withheld) and Mrs. Pornthip (last name withheld) during 14-15 August 2014 and they were indicted with the Criminal Court on 13 October 2014. Both accused have many times applied for bail which has been turned down by the Court which claimed that “given the serious circumstances of the case, the accused might flee”.

Later on 29 December 2014, the Court conducted a hearing and both accused pleaded guilty to the charge. The Court then ordered further investigation regarding the background of the two accused to find ground for leniency before making a decision on sentencing. The verdict is due to be delivered on Monday 23 February at 13.30. The probation officials have already conducted investigation of the background and behavior of the two accused three times.

Mr. Patiwat is a fourth year student from the Faculty of Fine and Applied Arts, Khon Kaen University. He is a professional traditional singer and performed it to raise his family. He has been recognized as a national outstanding youth and was a social activist. Mr. Pornthip was a graduate from Faculty of Political Science, Ramkhamhaeng University. A social activist, she worked on theatrical performance to raise social awareness and to empower youth.

In addition, on 22 January 2015, the UN Working Group on Arbitrary Detention has issued an opinion regarding the deprivation of liberty of Mr. Patiwat (last name withheld) during the trial that was a violation of Articles 9 and 19 of the Universal Declaration on Human Rights (UDHR) and Articles 9, paragraph 3 and 19, paragraph 2 of the International Covenant on Civil and Political Rights to which Thailand is a state party and is obliged to follow.

Therefore, the detention is concerned unlawful since it has stemmed from an peaceful exercise of the right to freedom of expression and that Mr. Patiwat must be immediately released and given compensation as per Article 9, paragraph 5 of the International Covenant on Civil and Political Rights.

HELP THOSE BANGED UP IN THAILAND FOR ALLEGEDLY INSULTING THE MONARCHY

May 10, 2016 Andrew Comments Off on HELP THOSE BANGED UP IN THAILAND FOR ALLEGEDLY INSULTING THE MONARCHY