David John Hanks, 66, a former pupil of Girvan Academy, Ayrshire and former owner of the Masquerades Brothel in Melbourne, Australia ,was remanded in Thailand at the weekend for trial in June on racketeering charges. 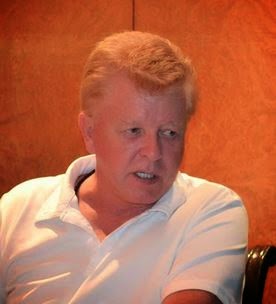 His co-defendant Alexander Matusov former boss of the Russian mafia group Chelkovo, who had been bailed, wrote to the court to say at the weekend he was otherwise engaged. He had he said developed sclerosis of the liver and could not travel from Moscow.

Both Matusov and Hanks faced multiple charges which centred around a money lending racket in the eastern resort of Pattaya – lending money to Russians at 60 per cent a month.

Hanks was described as the ‘funder’.   He had sold the Masquerades Brothel in Keysborough in the suburbs of Melbourne before leaving Australia.

He had also sold a AUS$1 million plus property.

Matusov, known by his nickname “Basmach” —meaning “bandit”— was taken by Thai immigration officers to Suvarnabhumi Airport and put on a flight to Russia last July.

Russian Vice Consul in Thailand Alexei Falunin said that the Chelkovo gang was one of the most dangerous gangs operating in Russian up until 2009.  It was responsible for some 60 murders.
Matusov is suspected of being involved in scores of killings, kidnappings and extortion practices in Moscow and St. Petersburg in the 1990s, and was living in Thailand on a retirement visa.

In fact separate to the Pattaya proceedings Matusov was detained last year at the request of the Russian authorities and deported back to Moscow. He went reluctantly, reported ITAR-Tass.

“The only illegal thing that I did here was to lift this passport at a police station an hour ago,” the report cited Matusov as saying, after which he pulled out a Vietnamese passport from his pocket with his handcuffed hands.

Matusov then lay down on the floor, demanding to see a lawyer, until officers put him into a wheelchair and rolled him to his flight, ITAR-Tass reported.

A year ago a Pattaya court in Thailand heard how David Hanks, 67, operated as a henchman for Drew Noyes, 60, an American who had set up quasi legal offices in the Thai resort.

Noyes has initially falsely claimed he was an American lawyer.

He has since been sentenced to two year in jail for extortion along with his wife Wanrapa Boonsu.

(Prior to arriving in Thailand Noyes had been the subject of an exposé in the Morning Star in Wilmington,  North Carolina. An article headed ‘Trouble Follows Developer’ contained statements accusing him of property and share fraud and sexual harassment. He had allegedly told a co-worker that if she wanted to continue her hours she would have to supply him with an oral sex service).

The victim Australian Michel Goulet, co-owner of the Thonglor Clinic in Pattaya told the court how he was first approached by Hanks who posed as a patient seeking a face lift.

Hanks told him that he had worked for Chinese and Russian mafia and told him he should speak with his boss Noyes, so that he could successfully run his business in Pattaya.  Noyes was also then the publisher of the now defunct Pattaya Times newspaper.

Noyes and his wife subsequently demanded 7 million baht from Goulet £135,000 on pain of a raid by officers of Thailand’s Crime Suppression Division and bad publicity in his newspaper when something ‘illegal’ was found on the premises.

Noyes later reduced his demand to 2.3 million baht (£44,346) after Goulet said he could not find the money in time.  Police set up a sting and caught Noyes and Boonsu in the act of taking a down payment.

Lions Led by Drew Noyes Join Police, Army, King's Royal Guard
Having been voted out of the Pattaya City Expats Club and refused membership of the Rotary,Noyes had his authority to run an Optimists Club removed by Optimists Internatonal within weeks of being set up with boiler room operators and a child sexual abuser among its founding members.

Noyes struck lucky with a predominatly India Lions Club in Bangkok and was elected President last year with his former bar service girl new ‘wife’ Warichaya Pharawet elected as secretary,  Hanks was invited to the celebrations.

David Hanks was also named along with Noyes and a third man Scot Brian Goudie, 48, from Falkirk, in another attempted fraud.

The intended victim was former US millionaire Bill Monson, who claimed he had been cheated out of his fortune in the cable television and mobile phone business by his former partner Thaksin Shinawatra – Thailand’s longest serving Prime Minister.

Monson sensed something wrong after they demanded US$7 million. Then Monson’s representative who toured sex bars with them in Pattaya’s Soi 6 Yodsak reported back that they were a bunch of low lives.

Goudie had previously been sentenced in Australia to six years for stealing from his employers a West Australia mining company. He was then using the name he was born with Brian Gerald James Goldie.
He had been charged in Thailand with posing as a barrister and lawyer to cheat a 76-year-old American woman Barbara Fanelli Miller out of some US$250,000 for his legal services.

Goudie is currently on the run from Thai police after a warrant was issued for his arrest for failing to turn up in court. His visa granted to attend his trial is also out of date.  He was the subject of the television crime documentary ‘Brian Goldie – Swindler Scot’.
The prosecution in Hanks’s trial has been set for June 10 and 11 and 16 and 18. The prosecution say they will produce eighteen witnesses predominantly from Thailand’s Department of Special Investigation – a separate unit working under the Ministry of Justice.
Hanks has admitted that he met Alexander Matusov in the offices of Drew Noyes ‘One Stop Service Center’ in Pattaya.
Thailand’s Crime Suppression Division was gutted of 80 per cent of its officers last year in a scandal in which they were accused of massive corruption and looting and profiteering from the oil trade, the illegal trade in animals, the smuggling of precious artifacts, and payment for promotions.
Hanks and Noyes have led a charmed life in Thailand and it has been speculated that their recent successes (both have been granted bail – Noyes while he appeals his conviction) is due to them ingratiating themselves with various military officers.

The Whacky World of Online Publishing – Orphanage Tourism! and a Silent Tsunami Warning!

July 29, 2014 Andrew Comments Off on The Whacky World of Online Publishing – Orphanage Tourism! and a Silent Tsunami Warning!

THE REAL FEARS FOR CHINESE DISSIDENTS IN THAILAND

February 1, 2016 Andrew Comments Off on THE REAL FEARS FOR CHINESE DISSIDENTS IN THAILAND