US$10,000 DOLLARS DOWN AFTER STITCH UP BETWEEN BAR GIRLS, POLICE. 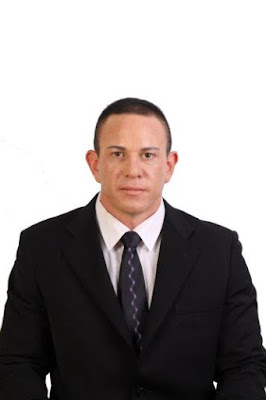 The owner of the ‘Green Gazette’ –  which publishes the South African government’s official notices – was banged up for two weeks in a squalid prison by rogue Thai police on fictitious charges – after an altercation with two ‘Coyote’ woman in the sun and sex resort of Pattaya.


Mark Berchowitz, 40, owner director of the Green Gazette, said he was charged with being in Thailand illegally, and ‘robbery by night’.

He was then forced to spend 15 nights in custody, the first two in the police lock-up in Pattaya, and the rest in Nong Plalai jail, Pattaya, sharing a room and two squat toilets with 400 other prisoners.

Berchowitz claims he refused to pay himself off the charges in the resort which is renowned for its sex trade and was only released after he had handed over 250,000 Thai baht (US$7,150) – most of which went to a notorious legal representative, whom police allowed to special privileges to trawl lock-up cells for trade in the police station and local court for victims.

So far, with legal costs, his ordeal has cost him 350,000 baht(US$10,010) and he still has to face court on the charges. The prosecution have so far not been able to proceed and prosecution witnesses have failed attend.

It appears the arresting officers placed the charges without even looking at his passport or checking with the Thai Immigration Department when they charged him on May 20th.

Had they done so they would have discovered that he had a visa still valid for weeks , according to documents he has produced.  Further that visa has now been extended. 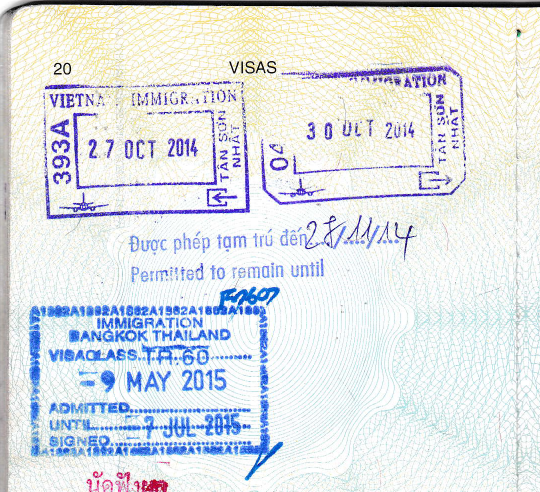 Berchowitz is not concerned about the fact that the problem arose because he hired two prostitutes. 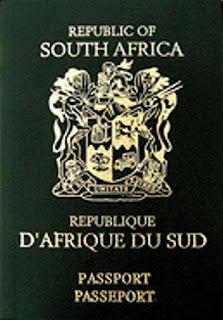 ‘It’s much more important that tourists learn they can be victim of such a scam. It probably happens often and people have been too embarrassed to talk about it.

The ominous sounding ‘robbery  by night’  would not see the light of day in a western court.

He was accused of was holding onto the two ID cards of two ‘Coyote women’ by night.

In fact he took them with the intention of taking them to the police station the following morning to press a complaint – which is exactly what he did.

‘By night’ charges carry a heavier penalty in Thailand.

But legally speaking there was clearly no evidence of intention to ‘permanently deprive the owners of their ID cards.”

Last year Pattaya Police and the local court locked up a British supermarket boss for over a month in Nong Plalai jail after he complained that he had been mugged in the resort.

They accused him of making a false complaint to defraud an insurance company and the supermarket manager Jaysukh (Jason) Sudra said demands were made for cash at Pattaya police station to drop the charges. But these came directly from police.

He added that he had not intended even to report the mugging as he was carrying under 1000 baht in cash, and a cheap mobile phone and watch, but made the complaint when he witnessed police ‘shaking down’ a tourist with a lady boy in the reception of the Ibis hotel in Pattaya. where he was staying.

He said he had told the policeman on the spot he had been mugged and policeman should deal with some real crime.

Mr. Sudra did not even have an insurance policy which covered theft; merely one which covered medical expenses. He went to jail, he said, after signing a document which he was told were his release papers and did not even appear before a judge.

On the other hand Mark Berchowitz said the offer to ‘pay himself out’ was made by a lawyer’s representative called ‘Mo’, who has featured in previous police and court deals.

Mo touts custom on behalf of the Unity International Law firm in Pattaya.

He declined the offer insisting he would not make corrupt payments.

But he was forced to use Mo’s services when he found himself in court being told the only way to avoid jail was to pay 150,000 baht bail.

He gave Mo his bank card and pin number and cash went into Mo’s account the same day – but it was too late to save him from prison.

To add insult to injury after giving ‘Mo’ the keys to his apartment to get his passport he discovered from the apartment records that his apartment had been used twice – for periods of three hours each time, as well as for a shorter visit.

The saga began on June 19th when Mr. Berchowitz said he had had an altercation after arriving at his Pattaya apartment with the two women nicknamed Oi and Tum,  whom he had befriended in the Lisa Coyote Bar in Second Road, Pattaya. 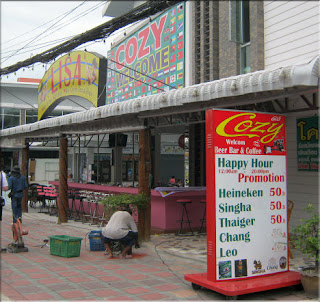 At the bar he had paid bar fines (the cost of taking a woman out of the bar) of 1000 baht each.

But at his apartment the women demanded he pay all the cash up front.

“I am not concerned about making this public. I am a single man. And I had taken other woman home for enjoyable evenings, even on the occasion when no sex was involved.

“But these women were different. Their friendly attitude changed to being very pushy and I had previously agreed only to pay 1,200 baht up front. Their attitude made me think I just did not want to spend any more time with them,” he said.

“I did not want to get into any further argument so I suggested we all return to the bar together so I could get a refund, but they refused.

“ On the way out I took their ID cards as from the security guard with the intention the following morning of taking the matter to police to mediate. And that’s what I did.  There had been a previous occasion in which police had assisted me.”

Organisations universally advise visitors to Thailand that if they take a prostitute back to their rooms they should insist the ID cards of their escorts are deposited at the front desk as many tourists have been drugged and robbed of all their valuables.

At the police station the two women showed up as he was making his complaint and soon he found from being the complainant he had become the guilty party. and when he refused to settle the matter without any refund he was put in the cells.

He was kept at the police station for two days, he said, without access to a lawyer accept ‘Mo’.

At the police station he was given food by a local charity, but police charged him five times the going rate for a bottle of water.

When he went to court after two nights in custody he said he was told to sign a document in Thai otherwise he would not get bail.  Then he finally he transferred 150,000 baht to ‘Mo’ for bail.
“I have no idea what the document said”.

But he still did not get out for another 11 days and then he had to pay a new lawyer another 100,000 Thai baht for bail plus his legal costs in advance.

He should have been given the original 150,000 baht back less legal services charges. But he says he has been invoiced 70,000 baht by Unity International Law, who have yet to return the difference.

Pattaya Police did not respond to requests for information. But  they may not wish to comment on a case already in the courts.

The South African Embassy however did furnish a letter sent by Pattaya Police to the Embassy which identified the charges and the police officers involved. 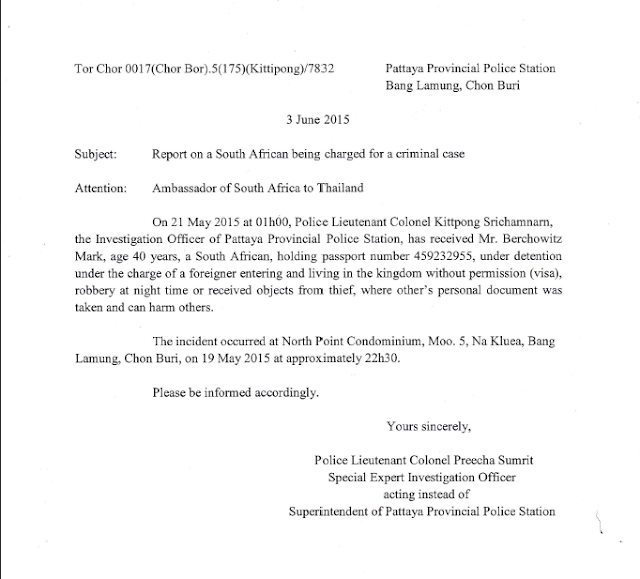 “Everyone in Nong Plalai can tell you about Unity Law.  The front man called Mo speaks Thai, English, Swedish, Arabic,  and is very convincing. 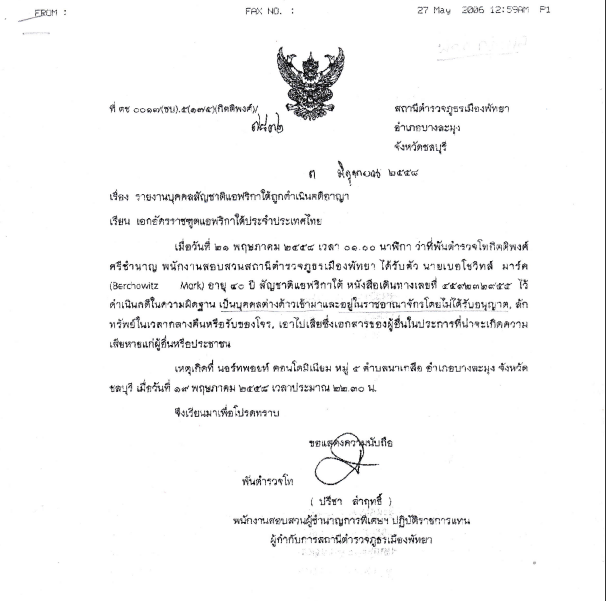 “He gets a call from police whenever they have a foreigner. He turns up, promises the earth and takes whatever he can get.

“They distort or add exorbitant fees to bail applications repeatedly. This can cost foreigners cost over a million or houses and cars, which no one ever gets back.”

March 8, 2016 Andrew Comments Off on ESCAPED FROM THAILAND – TOURIST JAILED WITHOUT TRIAL