The following is a statement issued today by Thai Lawyers for Human Rights.

Statement on Enforced Disappearance and Detention in Temporary Remand Facility in Military Camp: The case of Mr. Suriyan Sucharitpolawong and 2 other persons. 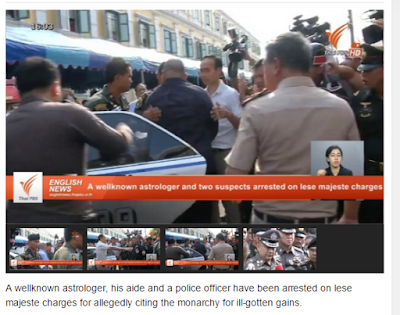 In the evening of 16 October 2015, some media reported that Mr.Suriyan Sucharitpolawong  was taken from his residence by state officials for allegedly committing a lèse majesté offence under Article 112 of the Thai Criminal Code.

On the same day, Police Colonel Akaradech Pimolsri, the Chief of the Crime Suppression Division, denied that the Division did not arrest Suriyan, and had no plan to arrange a press conference as it was rumored. However, Suriyan did not appear in public again until 21 October when the police and military officers brought Suriyan and other 2 persons to the Bangkok Military Court.

Mr. Suriyan was considered to be a victim of enforced disappearance during the 6 days, from 16 October 2015 to 21 October 2015, according to International Convention for the Protection of All Persons from Enforced Disappearance (CED), that is, he was taken under the detention in which the authority denied the deprivation of liberty and disclosure of place of confinement.

This occurrence means that during the period from the arrest to the day of police’s submission of pre-trial detention request to the Military Court when he reappeared to public, Suriyan was placed outside the protection of the law with no disclosure of fate and whereabouts.

Thailand has a commitment to not act in a manner that is contrary to the purpose of the Treaty after its signing of the Convention on 9 January 2012, although Thailand has yet to ratify it.

The detention by military and security forces under the Order of the Head of the National Council for Peace and Order No. 3/2558, which grants military and security personnel the power to summon an individual, when there is sufficient reason to suspect that individual has committed an offence, to give a deposition, and to detain an individual for not more than seven days in a place that is not authorized detention facilities, is a serious threat to the rights of a person accused of criminal charges and justice system.

It was reported that during the detention by military personnel, Mr. Suriyan and 2 other detainees had confessed to the accusation and implicated others, leading to criminal prosecution and issuance of arrest warrants against themselves.

This falls into the case that a person who was not formally informed of criminal charges and not yet an accused in a criminal case was interrogated without a presence of lawyer during the process.

In principle, an accused has a right to have a lawyer, a person who was only a suspect and was not yet being pressed any criminal charges must have a guarantee to the same rights. In addition, any confessions and implications made or obtained during an incommunicado detention in an unclosed place, with no guarantee of rights and no monitoring mechanisms, might have been obtained by unlawful methods and should not be used as evidence in a criminal case.

Moreover, the detention of Mr. Suriyan and other two accused charged with violating a lèse majesté offence under Article 112 at the Nakhon Chaisri temporary remand facility inside the 11th Military Circle, established for detaining an accused charged with offences related to national security, which separates the accused from civilian imprisonment in normal prisons to a specific remand facility operated by military, may compromise the rights of detainees to family visit or access to legal counsel. It is concerning that monitoring and checking on a detention in the facility on military base might be impracticable. For instance, On 23 September 2015, a lawyer was denied access to visit Mr. Adem Karadag, an accused in the Erawan Shrine Bombing.

The detention of civilians in the military area lacks transparency, guarantees of rights of detainees, and may lead to other human rights violations. It may amount to an arbitrary detention and a violation of international human rights law and obligations including the International Covenant on Civil and Political Rights.

(ICCPR), in particular Article 9 – prohibit of arbitrary detention, Article 10 – detainee’s treatment with humanity and with respect for the inherent dignity of the human person, and Article 14 – the right to be presumed innocent until proved guilty.

The Thai Lawyers for Human Rights demands an end to a detention in an undisclosed place, including the detention of a person in the Nakorn Chaisri temporary remand facility on a military base and controlled by military personnel. Should the country return to peace and order, it is essential that the justice administration as a function of accountability must be reliable and the rights and freedoms of people must be guaranteed.