The Thai resort of Pattaya – a hub of criminals and con men running charitable worthy organisations – has recently welcomed a new man on the block. 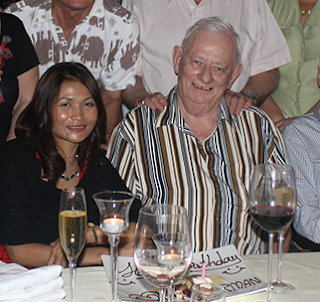 He is Norman Edwin Steele, also known as Norman Moxon, and is now the Master of the Trident Lodge of the Freemasons.

Actually Steele has been around for a few years  stealthily networking but the Trident Lodge is a new Lodge, operating separately from the West Winds Freemason Lodge in the same city, which of course starred Scots paedophile Martin Frutin.

It seems Norman is in the financial advice business or a person with his name and same appearance is.

But that person appears to have first been driven out of the UK,  South Africa and the Channel Islands and the Costa del Sol where he was selling products to avoid Inheritance Tax

Norman is not answering my calls. Perhaps he does not take calls from  unrecognised telephone numbers for indeed a lot of people appear  to want to meet up with him.

Recently he has been selling products from Cornhill Management – giving a bank in London.  Cornhill, here’s a well-known name in finance. 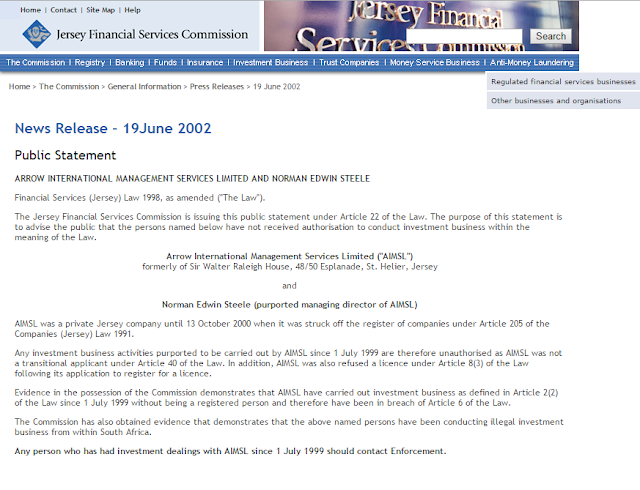 No need to get into the nitty gritty here.  Potential customers need only know that this Norman Edwin Steele is not registered to give financial advice in Thailand or indeed to sell financial products.  So if you lose money – you won’t get any back without a shot-gun.

As for the other Norman Edwin Steele, well the Jersey Financial Services Commission  issued this notice way back in 2002. 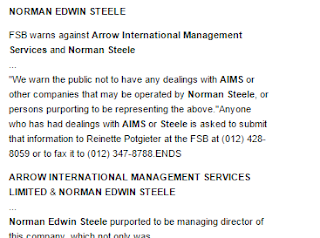 Then three years later the Financial Services Board issued this notice against Steele who was hanging out in Durban.

A report that a police arrest warrant was issued cannot be confirmed at this time.

But this Norman Edwin Steele shortly afterwards turned up on the Costa del Sol where again he seems to have upset a lot of people.

The online magazine of the Costa del Sol Action Group published an article shortly after this Norman Edwin Steele left for Thailand. 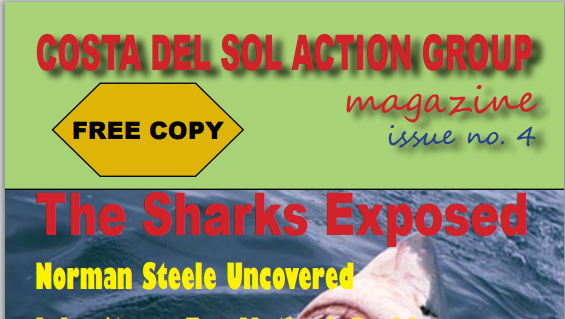 The article had Norman’s name with a cover picture depicting a shark and the article inside was headed with a picture of a rat.  – and look! This Norman Edwin Steele has got a thing about Freemasons.

The editor of the magazine who was sent a picture of the Thai based Norman Edwin Steele said: ‘Yes. its the same man’. 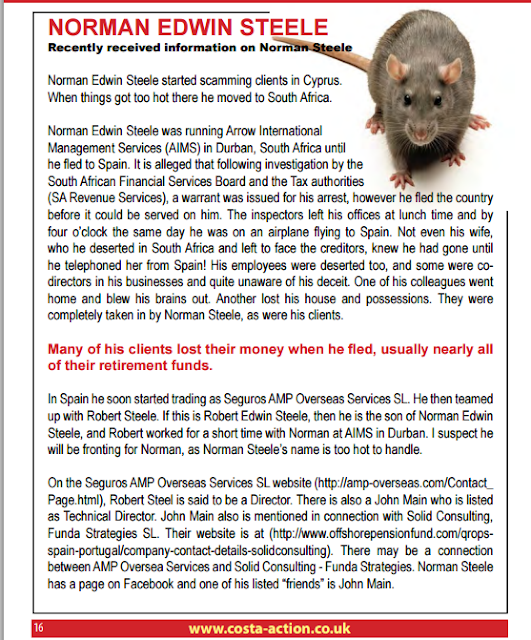 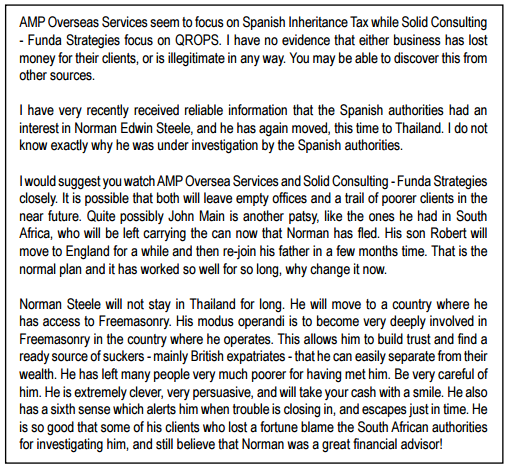 Freemasons are meant to help each other right?  Seems that Norman might have taken a few by surprise.


James Norman Moxon Steele  has since been in touch and denied allegations made by the Costa del Sol Action Group which he says have been conducting a  vendetta against.
His says he is no longer operating as a financial advisor.

Here are his points against CDSG which are contained in pictures in this article:  I am happy to publish.

The warnings by the Jersey and South African authorities have not been withdrawn.

“I was in Holland at a dressage seminar when they visited my offices. This they were aware of but didn’t take any notice.


“I didn’t desert my wife and lave South Africa that day – I wasn’t even in South Africa. In fact, I didn’t leave until 7 months after this took place i.e. April 2002.


“My wife and I remained good friends even to this day. She didn’t join me in Spain because of family commitments which she now regrets. I am asking her to produce a sworn affidavit to this effect. My son never worked for me. There was no death as reported – a complete fabrication.


“The CDSAG started this campaign about me because I was defending my business partner who they were also making false allegations about.


” I started legal action via Baker & Co., in Jersey (various copies of letters attached but I couldn’t afford to continue because the fees were too high.

“There was never an arrest warrant taken out on me but the FSB did try and report the matter to the policy but they threw it out – see attached letter. There is more’.


A document supplied from the Commercial Branch of the South African Police Service dated September 7th 2007 shows the that the police case which was sent to the prosecutor was subsequently withdrawn by the prosecutor. 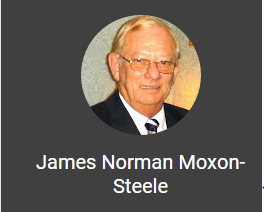 Peace Breaks Out In Pattaya – No War Say Media Barons

July 18, 2010 Andrew Comments Off on Peace Breaks Out In Pattaya – No War Say Media Barons

May 14, 2015 Andrew Comments Off on PATTAYA’S ‘VERY BEST LAW FIRM’ BOSS ASKS FOR DELAY. HIS LAWYER’S MUM IS SICK