‘NO!’ SAY US IMMIGRATION OFFICIALS 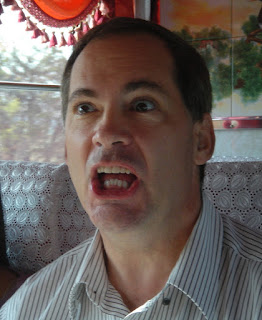 The path of love for our famous American con man Drew Noyes, now in the United States having fled bail while appealing against a conviction and two year prison sentence for extortion, appears to have hit a brick wall.

Ensconced back in Wilmington, North Carolina, where he was first exposed by the ‘Star’ newspaper for property fraud, share fraud, and sexual harassment, Noyes has written two letters of support to the US Immigration authorities for a visa for a nanny to look after the five children he took there.

The mothers of the children are his first illiterate Thai wife, Nittaya Chaisit, and his common law wife Wanrapa Boonsu, aka Kung, with whom he was convicted of attempting to extort the Thonglor Clinic out of 7 million Thai baht on pain of a police raid and bad publicity in his now long since defunct Pattaya Times newspaper. 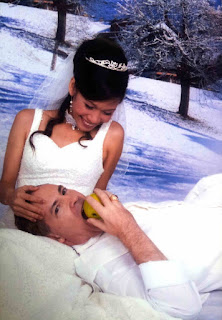 The children he left behind are the eldest, by Chaisit, and one by Wanrapa and another by a former member of staff at his One Stop Service Center in Pattaya.

The only one of his mistresses who did not get pregnant was ‘Nam’ from the Buffalo bar.  But she made it to become secretary of the Lions Club, Silom, 310D branch!

He failed to get a visa for Nitttaya, did not support a visa for Kung as she was convicted with him, and has recently been supporting a visa for a certain Pawadee Jittrerom to come over and be his Thai nanny.

Two applications have failed which might suggest that the US authorities might be catching on to Pattaya’s most famous sex tourist.

In the US Noyes has already been up on larceny charges. He fled Wilmington after the ‘Star’ story which also carried a report that he had demanded oral sex from one of his employees otherwise he would cut her hours.

On arrival in Thailand he set up a couple of Beer Bars and set about test driving his female bar staff. He did not come to the country as he claimed ‘by Royal proclamation’ to help the country out of the Asian financial crisis.

To find willing staff he recruited Filipinas through the social media ‘Tagged.com’.

Two had to be rescued with the aid of local foreigners and one of the claimed Noyes attacked her after locking her up in a room at one of his Keha Condo (National Housing Authority) apartments.

Most of the local authorities were taken in by Noyes including the police and immigration police.

But most gullible of all were the Pattaya Judges with whom he held a ‘legal seminar’. The seminar was childish in its conduct and content and was even carried by Thai Visa.com.

Questions about the reality of justice in the Pattaya Courts were brushed aside or fobbed off as police matters.

There is little evidence today, despite being repeatedly told, that Noyes is and always has been a total fraudster. That judges in Pattaya actually get it, though it is not beyond the realms of belief that they are universally corrupt.

A case Noyes has brought against for instance a Briton called Ally Cooper, a supporter of this site, was allowed to proceed even though clearly the summons was never delivered – this despite the fact that Noyes is thousands of miles away, does not intend to and cannot return, and cannot be counter sued when he loses.

From Wilmington Noyes has been demanding 500,000 baht to drop the case.

His demands have been dismissed. But the Pattaya judges have in effect stopped Cooper, an oil man, from working for over a year. And that is Pattaya justice.

Similarly another case in the Pattaya courts was allowed to proceed on totally falsified documents presented by Noyes’ lawyers. 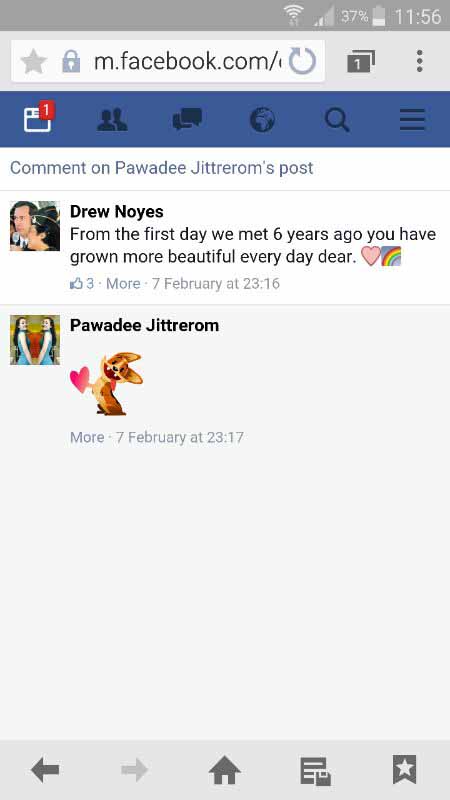 Getting back to Noyes’ latest conquest Pawadee Jittrerom, nicknamed Tan is apparently pregnant, and as Noyes has been out of the country now for six months it is getting to the stage that she cannot travel.

In a recent post Noyes stated: “From the first day we met 6 years ago you have grown more beautiful everyday. ”

And in another he writes: “Lovely and motivated to succeed as a good wife and mother’.

That’s an odd way to talk to a nanny so perhaps the USD authorities watch Facebook too.

But this is slightly worrying because pictures she put up on the net last year show her as a school girl.

A former US Ambassador may be regretting the day she posed for pictures with Drew Noyes on a trip to American businessmen on Thailand’s eastern seaboard.

Questions have long been asked about a child Noyes is alleged to have fathered with his Thai wife’s niece who was 14 at the time.

Meanwhile the US authorities are anxious to get hold of Drew Noyes’s drinking friend Brian Wright in relation to a child abuse case in Rhode Island.

Wright and Noyes used to trawl bars together in Pattaya and one in particular, now closed, in Jomtien Plaza, which appeared to offer very young Isaan girls to customers.

The details of that Wright’s US case are particularly horrific. As the victim is an American citizen the investigation has been more thorough.

Through his ‘My Thai Fiancee’ company – also known as US Immigration and Law he boasted helping arrange visas for US Secret Service Agents, diplomats, military etc. 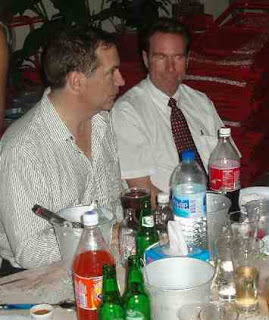 Brian Wright was jailed for 24 years in 2014 for child sexual abuse and is reported to be on bail appealing conviction and sentenced. (Currently checking status).

He is the godfather to his Noyes’ eldest dauighter by Chaisit.