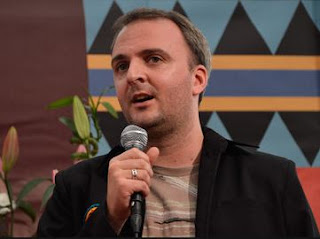 Lawyers representing Andy Hall, a British researcher and labour activist specialising in migrant worker rights, will tomorrow on 31st May at 9:00am (GMT+7hrs) file criminal litigation against Thailand’s Office of the Attorney General, nine Thai state prosecution officials and one senior police officer at the Central Criminal Court for Corruption and Misconduct Cases in Dusit District of Bangkok, Thailand. Hall’s lawyers will then proceed to file further criminal litigation at Prakanong Court in Prakanong District of Bangkok against Natural Fruit Company Ltd., a board member with legal authority to act on behalf of the company, a senior company management official and the company’s lawyer, altogether four additional persons.

These litigations concern a criminal defamation charge relating to an interview Hall gave to Aljazeera English in Myanmar. The charge was filed against him by Natural Fruit at Bangna Police station in Bangkok in July 2013. The Office of the Attorney General, in the role of investigator of the complaint, assigned the criminal investigation of the case to Bangna police and later recommended the case for prosecution. Following this, prosecution officials prosecuted Hall who was then in May 2014 indicted for a full criminal trial at Prakanong Court.

Hall’s passport was confiscated following his indictment during temporarily release on bail pending trial and his freedom of movement overseas was curtailed. Natural Fruit requested to become a joint prosecutor in the case alongside the Office of the Attorney General. In October 2014, following a 6-day trial, Prakanong Court dismissed the prosecution by the Office of the Attorney General and Natural Fruit as unlawful on the grounds of flawed police investigation and interrogation procedures.

Despite the dismissal, judicial harassment against Hall continued as both Natural Fruit and state prosecution officials, as the two case plaintiffs, continued to pursue this case appealing the legality of the dismissal first to the Appeals Court and then onto the Supreme Court. In November 2016, Thailand’s Supreme Court delivered its final verdict on the appeals dismissing the case once and for all on both procedural and investigatory grounds. The Supreme Court reasoned that the prosecution was unlawful as the case couldn’t lawfully be tried in Thailand’s courts given that the nature of the alleged offence and the location where the alleged offence was committed lay outside the country.

“I am launching these litigations consisting of two sets of criminal prosecutions today with a heavy heart and not out of anger or with any desire for revenge. It is regretful that things have reached this stage. However, it is necessary now to launch these litigations as I must defend myself against an unlawful prosecution and judicial harassment waged against me that continues unabated,” said Andy Hall from Brussels in Belgium.

“I was encouraged to initiate these litigations by migrant workers whom I continue to support in Thailand. After my criminal conviction, many workers and rights defenders in Thailand and even globally told me they hesitate to voice concerns on exploitation or report fully on abuses due to fear of negative repercussions. It’s imperative that these two sets of criminal prosecutions claim space back for victims of rights abuses, exploited workers and human rights defenders to speak out with confidence about unlawful conduct by business and state actors without repercussions,’ said Hall.

“I also chose to launch these litigations because of the advice and support provided to me by a committed team of respected human rights lawyers. My legal team and I aim to contribute through these litigations towards reform of the Thai justice system. Such reform through litigation can enhance the rule of law and ensure meaningful accountability for victims of the unlawful and unacceptable abuse of state police investigatory and prosecutorial powers,” Hall added.

Andy Hall continues to fight his previous conviction on criminal defamation and computer crimes charges, also initiated by Natural Fruit, in which he was found guilty and handed a suspended 3-year prison sentence in September 2016. This guilty verdict met with wide-ranging international criticism from civil society, trade unions, business enterprises and the UN, ILO and EU. Both Natural Fruit and Hall have appealed the conviction with the company seeking an immediate custodial sentence against Hall and Hall seeking to have the conviction fully overturned.

Another Thai company, Thammakaset Farm, has also filed additional criminal defamation and computer crimes charges against Hall. This escalating harassment, in addition to his September 2016 conviction, forced Hall to leave Thailand after 11 years in November 2016 to live in Europe.

According to the UN Guiding Principles on Business and Human Rights, states must ensure that their “courts are independent of economic or political pressures from other state agents and from business actors, and that the legitimate and peaceful activities of human rights defenders are not obstructed”.

In Thailand, statistics on prosecutions under the Computer Crimes Act have exploded in the past two years. According to critics, the provisions in this law have been used by authorities and private companies to silence human rights defenders, journalists and others. Civil society organisations have called for both the repeal of provisions in Thailand’s Penal Code that criminalise defamation and for the Computer Crime Act to be amended in compliance with international standards regarding freedom of expression.

Natural Fruit has initiated altogether four criminal and civil prosecutions against Hall stemming from his contribution to the Finnwatch report Cheap Has a High Price, published in 2013. The report reported serious allegations of human and labour rights violations at Natural Fruit’s pineapple juice production facilities.

Although Finnwatch is not involved in the litigations launched by Hall, the organisation continues to support Hall’s appeal against his September 2016 conviction. In all proceedings bought by Natural Fruit against Hall, Finnwatch alongside the Thai Tuna Industry Association and Thai Union Group contributed towards his legal fees, fines and bail costs. At his trial hearings, Finnwatch alongside Finnish conglomerate S Group and Thai seafood associations and companies also testified in Hall’s defence.

“Andy has been unwavering in his support for the rights of migrant workers in Thailand for over a decade. He has dedicated his life to this work. This ongoing campaign of judicial harassment against him, which has entered its fifth year, has taken a heavy toll and should end,” said Sonja Vartiala, executive director of Finnwatch.

“It is the duty of businesses and governments to cease judicial harassment against human rights defenders working on issues of business and human rights. Work done by researchers like Andy on working conditions in global supply chains is valuable also for the companies trading in Thailand,” she reminded.