While the death of Belgian Elise Delamagne on the Thai island of Koh Tao has produced reams more negative publicity for Thailand this is a story I have kept well away from because the reporting of it made me feel a trifle uneasy.

It has, however, prompted the Thais to shoot themselves in the foot again with Surat Thani governor Uaychai Innak announcing he would be suing the Samui Times, the source, for damaging the island’s reputation.

The Samui Times ‘broke’ this story at the same time stating that Koh Tao was known locally as ‘Death Island’.  Well that’s the first thing that made me suspicious. It smacks of the author trying to emulate the British tabloid press. Indeed, this article was ‘picked up’ by most of the British tabloids.

But ‘Death Island’?  Although they copied it because thankfully someone else made it up, no British tabloid reporter worth his salt could be quite so unimaginative. I might however write that this woman’s suspicious death happened in Thailand’s ‘murder archipelago’ and I guess I could justify that from the British Foreign Office’s travel advisory. Even Bangkok Thais treat the southern islands with caution.

Anyway, no such libel case is going to be brought under the Computer Crimes Act because the author was writing the story from the UK, and the Samui Times website is not put together in Thailand.

If the Thai authorities want to catch foreign crooks running websites and publications in Thailand they need go further than Hua Hin or Pattaya. However, these guys write nothing but flattering stuff about local officials, while scamming expats and visitors alike.

But how suspicious is the death of Elise, whose body was allegedly torn apart by wild animals, and whose luggage apparently went on a ferry to Chumphon?  By the way both those statements have since been denied by Thai police.

The Samui Times was created by a British woman who had resided in Koh Tao and Samui for many years, arriving as a ‘lotus eater’ working for dive companies etc, and even marrying into the local ‘family’. She knew all the local players on Koh Tao when Britons Hannah Witheridge and David Miller were brutally murdered there in 2014.

She even became a champion of the Burmese Zaw Lin and Wai Phyo, who were sentenced to death for the murders, visiting ‘my boys’ in prison. But her coverage became almost fanatical.
She even got into bed (not literally) with an Australian lawyer Ian Yarwood, who had decided also to take up the case of the migrant workers. 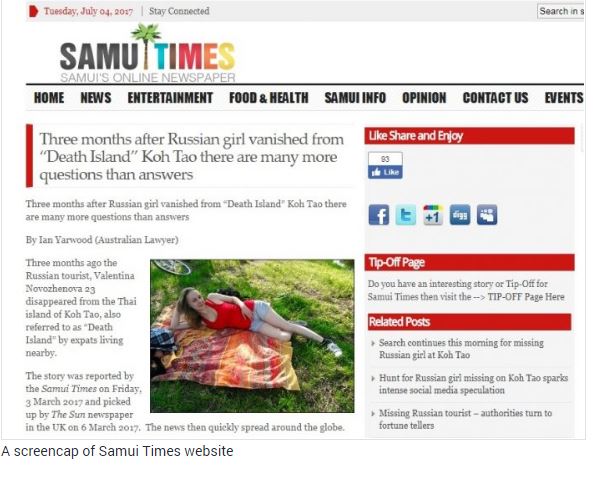 But their joint writings got more and more outrageous and vicious.  Soon they were making open attacks on the defence team and another Australian lawyer who had offered his services ‘pro bono’.

It got mucky and the only people who suffered were the two accused, one of whom, the couple were recently claiming, was not as innocent as the other.  In recent tweets Yarwood has even published pictures of Miller’s corpse.

The publisher of the Samui Times was not in the past very aggressive. She got her money from the advertising her website spawned and everything was nice on Koh Samui, at least in the Samui Times.

Indeed, when once I asked her the location of a well-known British criminal underworld figure, whom she knew, she replied: ‘Its more than my life’s worth!’  I mean I had the address. I just needed to figure out where it was!

Then in 2015 she returned to the UK announcing she was going to blow the lid on the island mafia. She spoke of mafia figures wheeling corpses up to the hills in Koh Tao, but nothing ever came of her stories.  I know she went to the BBC and got a rejection. Nowadays neither I or the BBC correspondent speak to her.
The last time we spoke she was in southern England but had to move because ‘they’ had discovered her address.

So, is the death of Elise suspicious?

Well yes, I guess most deaths of foreigners in these islands are. Particularly because, as usual, local police have no credibility and often keep shtum about the deaths and the justice system is rotten to the core.

And while Elise’s mother obviously wants answers I have never seen any quotes from her in the accusatory tone of the articles which have been written.

It is of course routine for Thai police to divert blame to someone else. Hence, they announced they wanted to talk to a leader of a sect on Koh Phangan where Elise had stayed.  But that has produced nothing.

Do I believe these islands are dangerous for foreigners? Yes. They certainly can be, I even believe influential people would not bat an eyelid at murdering foreigners there.

But police in Bangkok appear to have information that she tried to commit suicide there by throwing herself under a train. They even quote the hospital she was taken to for counselling.

I think this statement needs to be investigated before I can give credence to the suggested foul play.

After all it remains the case that most foreigners who die in the non ‘health and safety’ Samui archipelago are still the victims of tragic accidents and here there is no smoking gun. So I guess it could backfire on the foreign press, who have not been sweethearts for quite some time.

Having said that, my heart is not bleeding for the Surat Thani Governor. It is difficult to libel an inanimate object such as an island. As for what foreigners think of Koh Tao, well that’s up to the behaviour of the locals.

Personally I have been stiffed for thousands down on this archipelago and refused to go there unless required to do so on assignment.

For most though its paradise – until it isn’t.

ONLINE PETITION ON KOH TAO MURDERS PROMPTS MARCH ON NO 10

October 15, 2014 Andrew Comments Off on ONLINE PETITION ON KOH TAO MURDERS PROMPTS MARCH ON NO 10

May 6, 2015 Andrew Comments Off on NEW PLEA FOR JUSTICE IN MURDERED BRITS CASE